(by Kevin Byrne, from IMC Newsletter Summer 2000)
A return trip to the Black Cuillin of Skye. 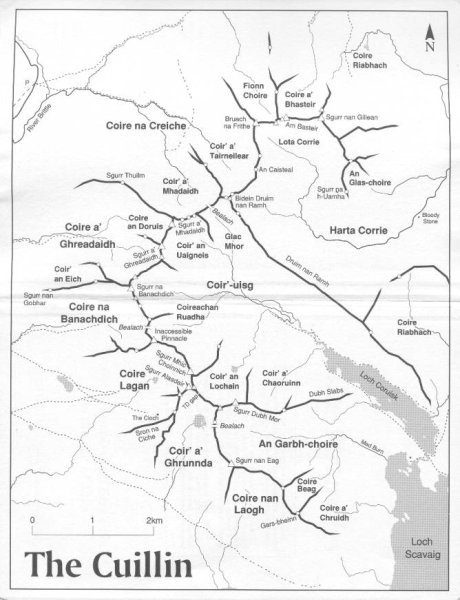 My first, and only other, visit to the Black Cuillin of Skye took place twenty odd years ago on a celebrated IMC meet. Finding the Ridge in perfect conditions, that visit resulted in a successful traverse over two days which was immortalised in an article by David Walsh recounting both the adventure and the rivalry between the two IMC ropes of Peter Gargan and myself and David with Peter Norton.

Needless to say, that lightning, first time and, most importantly, successful visit to the ridge still holds many emotional memories. A return visit to Skye, to sample once again the beauty and challenge of the Cuillin, was something I had long thought about. So, an invitation from Alistair Dunn of Belfast to join a party intent on doing the Ridge was enthusiastically accepted. The number eventually expanded to six with two from Belfast, two from Dublin, and one each from Toronto and London.

Driving north from the Troon ferryport on Friday, the weather was everything we feared — wind, rain and a cloud level about the height of a double decker bus. But the forecast for Sunday and Monday was good and so we made our plans to leave Glenbrittle late Saturday evening with the intention of bivvying on the Ridge and completing the traverse on Sunday.

At noon on Monday there was driving rain in Glenbrittle but by 5.00pm it was clear if still a bit windy and cool. We took our time on the walk in, intending only to climb the first peak, Gars Bheinn, before settling down for the night. Even going slowly, we could not ignore the huge slog needed to ascend Gars Bheinn but the consolation was the magnificent panorama that expanded with every foot gained. The view south from the slopes of Gars Bheinn out across to the islands of Soay, Eigg, Rum etc is breathtaking on a fine evening but even that is overshadowed by the wild grandeur of the Cuillin which only comes into full focus when the summit ridge is reached and Lough Coruisk is first seen. 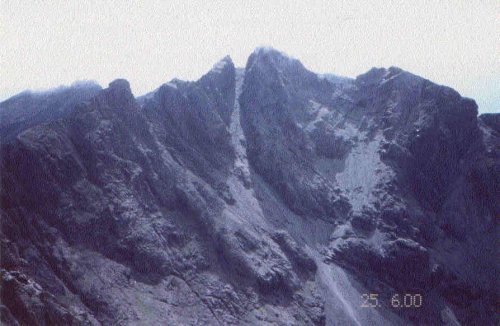 In the event we managed to move a bit along the ridge as far as Sgurr nan Eag above Coir’ a’ Ghrunnda before opting to avail of some of the many bivvy sites along this part of the ridge. Before settling down, Eimhin and Scott, the young tigers of the party, decided they would take a quick hop over to Sgurr Dubh Mor which lies a little way off the main ridge and which the rest of us vowed to leave out the following morning. The quick hop took an hour and it was in rapidly failing light that the two returned at 10.45pm. Fortunately at this time of the year in Skye it doesn’t really get dark and once the cloud cover dispersed completely there was light in the sky all night. 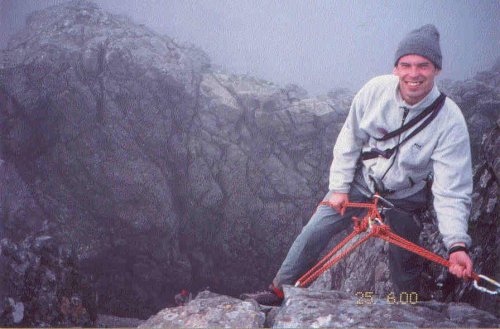 Eimhin McManus belaying at the top of the Thearlaich Dubh Gap

After a pleasant if quite cold bivvy (this time complete with goretex bivvy bag) we slowly got underway some time around 6.00am. Soon enough we ran into the first difficulties of the day…not everyone wanted to traverse An Caisteal, though it is on the main ridge, and some were not too happy unroped on some of the more exposed sections of scrambling, especially as the rock was still very cold. Eventually we reached the first major difficulty — the Thearlaich Dubh Gap, (Scottish V. Diff meaning at least Hard Severe) — and in classic fashion proceeded to waste far too much time while all the party climbed. It seems we spent over two hours in descending and ascending the gap by which time everyone had frozen hands and dampened spirits. In retrospect, the time spent here and in moving together as a party of six as far as King’s Chimney undoubtedly resulted in our not finishing the Ridge. 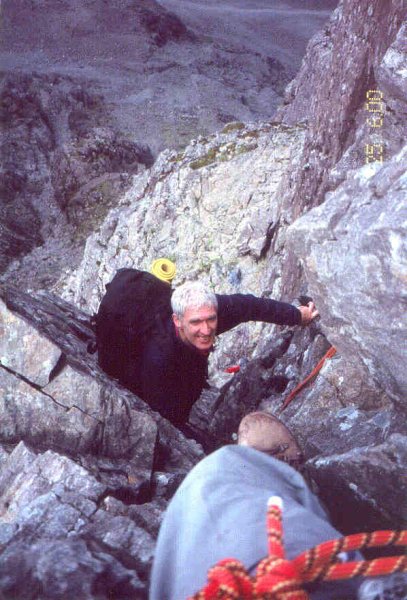 King’s Chimney (which we had missed out on due to a queue on the last occasion) was a delight and was the point at which the party finally broke into three ropes of two. The route from there to the Inaccessible Pinnacle is probably the most frequently traversed part of the Ridge — being a major part of the circuit of Coire Lagan. Accordingly the route-finding is straightforward. The ascent of the Pinnacle itself is no more than an exposed Diff climb (Diff even by Scottish standards) and is followed by what must be the most photographed abseil in the world.

Thereafter the real grind of the ridge begins and the individual peaks (and sub-peaks and peaklets, and pinnacles and ascents and descents etc etc ) of Sgurr na Banadich, Sgurr a’ Ghreadaidh and Sgurr a’ Mhadaidh all blur into one another as time seems to move too quickly and progress seems to slow right down as the relentless search for the correct route goes on and on. No wonder the guide book describes this as one of the most committing sections of the Ridge.

The weather was perfect and the fabled Cuillin mist did little but make ghostly appearances from time to time — no doubt to remind us of our good fortune. The wind too was absent which made the narrower sections so much more pleasant. But the downside of such warm and sunny weather was that before we had crossed Sgurr a Mhadaidh, Eimhin was just about out of water and we were down to sharing mine (in fairness, and in deference to my remaining water if not my age, he did carry the rope!). A chance meeting with a party coming the other way advised us that we could find water by descending about 100 feet towards some wet looking patches…in the end all we got was a penalty of twenty minutes that we could have done without. The same party was later to give two of our group a full litre of water…we certainly would have preferred that to the futile directions.

Eventually we reached that most frustrating of peaks — Bidein Druim nam Ramh with its three confusing summits. The first summit was reached and passed quickly enough and we were soon on the middle summit. Unfortunately the way off here was far from obvious and consultations with the guide book (“Skye Scrambles”, just published) yielded little by way of useful information. References to the north or other side when the compass is not reliable and with encouraging words like “The easiest descent from here is to return the same way” we again spent longer here than we would have liked.

After Bidein Druim nan Ramh the final challenge of Am Basteir almost seems atainable but once again the deceptive distances and challenges of the Cuillin combine to make the journey longer than it seems. The traverse of An Caisteal and Bruach na Frithe are by no means simple and route finding difficulties present themselves right to the end. There are also a couple of crevasse like clefts on An Caisteal which have to be jumped — a nice test of nerve and steadiness.

Two parties of two had passed us on this section — one party of sporting “Iron Man Triathlon” Tee shirts which seemed to sum up the progress they were making. The other party were also moving well but not quite in the same league. In the event we caught up on and passed this party on Bruach na Frithe where one was curled up obviously feeling the effects of the sun and the huge effort of the day. As we didn’t see them after that we assumed they descended.

By the time we arrived at the Baisteir Tooth time was marching on. It was rapidly approaching 9.00pm and the mist had finally descended. We were now faced with the dilemma of whether to press on in the certain knowledge that it would mean another bivvy (with little or no water) or whether to descend. By this time we knew that the other four in our party had quit the Ridge earlier (text messaging on mobile phones is a great man!) and were now back in Carbost enjoying good food and an intensive rehydration programme. After waiting at the gap about 20 minutes hoping the mist would clear so we could at least get a good look at Naismith’s Route on the Tooth, we finally opted to call it a day and headed for Fionn Coire and Sligachan. Of course we were disappointed at not finishing completely but we were more than happy to have had such a magnificent day on the finest hills in these islands. Another lightning raid — perfect conditions again.

The walk out to Sligachan was a tortuous affair after such a long day and suffice it to say that it was two extremely weary bodies that finally reached the Hotel at around 12.30am. Thank God that it is bright enough to walk on Skye at midnight in mid-Summer.