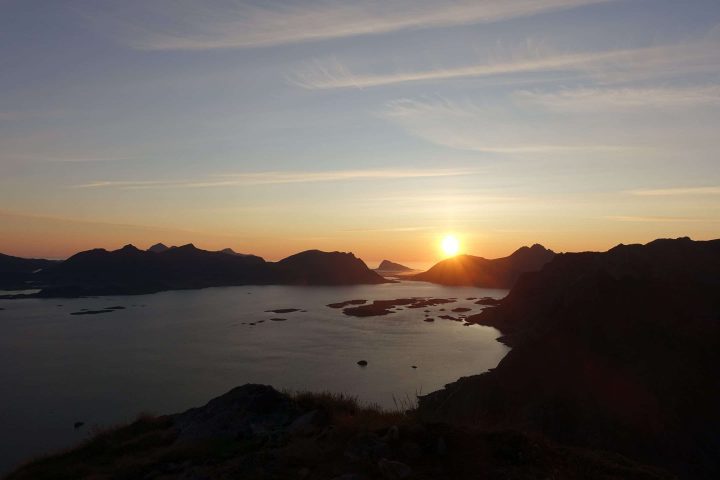 Lofoten, just above the Arctic circle in Norway, is a rock climbers paradise. Four of us (Dave K., Anni H., Sile and myself) spent most of July there this year (2019) climbing in the sunshine. While the area has everything from bouldering to big wall routes, for me at least, it is at its best with multipitch trad. Long routes with short approaches means you can climb all day and get back to the campsite for some grub and a couple of beers. As for the climbing, cracks abound interspersed with technical slabs. There are some bolt belays and the odd bolt placed en route on very runout sections, but its well done and definitely preserves the adventurous feel of the cragging. Rockfax produce a selected guide to the area which has plenty of routes and information for the first-time visitor.

Getting there and where to stay.

There are various options for getting there, which generally involve two flights. Sile and I flew to Oslo and then an internal flight on up to Bodø, from there the holiday really begins with a ferry trip up through the fjords to Svolvær. Dave and Anni flew to Helsinki (that’s in Finland) and drove across, picking us up at Svolvær. We all camped at Kalle for the majority of the trip which is a public campsite nestled between the sea and a forest. Kalle has a wealth of climbing within walking distance and less than 20 minutes drive from the likewise plentiful climbing of the Henningsvær area. The camping at Kalle is free, but you have to pay to use the toilet block. The toilets, it has to be said, are fantastic, a joy to behold. Surely, there is no greater pleasure than perching ones skinny little climbers’ arse on the pristine porcelain provided or sluicing one’s crag battered body in the hot showers that are also available. One must take care though, as certain reprobates choose to bypass the small fee and lie in wait for some unsuspecting punter to leave their porcelain perch and catch the door before it closes, thus avoiding the small fee requested for such a luxurious lavatory. Others, worse still, go in the forest!

From Kalle it is possible to walk to several crags, the closest is Kallebukta which is directly above the campsite. “Puffrisset” is the obvious crack, that will usually have at least one party on it, it’s a low in the grade (n6) and worthwhile for an easy day. It is worth noting the grades are less than consistent, everything we climbed seemed to be given n6, which could be anything from middle of the grade HVS to the bottom end of E3. The length or seriousness of the route had no bearing on which end of the scale it would be. This supposedly dates back to Norwegians originally using the UIAA grading system but firmly believing that 6 would be the hardest anyone would ever climb. So, as grades in the rest of Europe climbed up into higher numbers, the Norwegian system diverged and just graded anything hard as n6. Eventually the Norwegians moved on and their system now goes all the way to n9, though they could do with retroactively re-grading the n6’s. It all adds to the spice though.

A short walk from Kalle is the single pitch area aptly named Paradiset (paradise). The climbing is spread out along the coast and while the guide covers the area, only a selection of routes have been recorded. So, you can seek out a nails test piece or just spend a few hours strolling through picking out lines that take your fancy. Also, as long as it’s not actually raining, you will find dry rock here.

Above Paradiset the imposing South and East sides of Vagakallen can be seen. Vagakellen forms part of a series of peaks and crags that ring the valley to its east including Myggapillaren, Storpillaren (hard chaws only) and the Overladen area.

Driving out of Kalle and around towards Henningsvær there are plenty more crags, the jewel of which is Presten (the priest). Presten’s west side is a 600m slab of fantastic granite that starts just above the road and finishes at the summit, with quality climbing from start to end. There are a multitude of other crags/areas all easily accessible from the same road, my personal favourite of which is Djupfjord.

Dave and Anni arrived the day before us and started climbing in the Henningsvær area at Gandalf, a roadside crag with mostly 2-3 pitch routes on pristine, steep but juggy, granite. Sile and I were there the day after and also knocked off a couple of the classics, while Dave and Anni headed to another crag (Festaveggen) down the road.

The following day we all headed for Presten to climb “Vestpillaren Direct”. This gives an amazing 12 pitches (high in the grade n6) that comprise the ‘must do’ route of the area. Sile and I had climbed it on a previous trip but the quality was so good that we were keen to go again. The first time we had the route to ourselves and climbed it on the back end of the trip while we were fit and moving well. My memory is we cruised it (I’ve been told my memory is very unreliable, though I’m not sure by who!). This time, queues and hot weather along with a good deal of rust from not having climbed such a long route in a very long time meant we were slow, very slow. I admit I was cursing Dave and Anni as I could see them on the upper pitches while we were baking in the sun far below. Though, I definitely wasn’t cursing them when we eventually got back down off the route and there they were waiting patiently in the car, beers at the ready. After a rest day, Dave and Anni headed for some single pitch gems at Paradiset while Sile and I decided we needed to brush up on our multi-pitch techniques and went up to another long route called “Rom and Cola” on Alkohlveggen. This time the climb went smoothly enough but the descent down a wet gully with multiple stuck ropes meant we were out though most of the night again. That meant another rest day for Sile and me while Dave and Anni disappeared off around to the Henningsvær area to climb “Silmarillion”. They returned with very sketchy sounding tales of loose rock, hollow flakes and a couple of falls followed by the obligatory, “it’s great, you should try it” (not bloody likely!!). The next day we travelled to Svolvær to stock up on food and climb “the goat”, a famous rock formation above the town. A French group beat us to the start but proved to be good company on the way up and we all enjoyed an easy but quality route.

We spent another few more days cragging around Kalle and Henningsvær before packing up and heading eastward towards Stetind (Norway’s national mountain apparently). The camping beneath Stetind was in a layby with a toilet block that was not to be sniffed at, I mean that literally, it smelt like a dead fox had crawled up out of its grave and threw up in your nose. Maybe we had been spoilt at Kalle, the toilets there were immaculate, a joy to the senses, worthy of any toll. At Stetind though, the smell was so foul, I had to bail on a days climbing to recover from the noxious odour. Dave and Anni, less sensitive to such things (or possible just more accustomed to them) went for a mighty tick on Stetind’s west side combining “Vestveggen” (The West Face) and “Vesteggen” (The West Ridge) for a very long day out. So long in fact, that the next morning, as Sile and I made our way up towards the mountain, we ran into them on their way down. Sile and I sought out the more amendable “Sydpilaren” (South Pillar) and had a great day climbing albeit with a torturously long descent. Then, unable to bear Stetinds putrid latrine any longer we packed up and headed back to Kalle and its beautifully maintained outhouse.

Back on the magic islands we decided to try “Himmelen kan vente” (Heaven can wait) a superb looking route on Presten. We had tried it before the trip to Stetind but got stuck behind a slow party on a very cool and windy day and decided to bail after the fourth pitch. Though, at least, we did get to climb the excellent off-width second pitch, so it was still a good climbing day. The second attempt didn’t go much better and we were rained off after the off-width pitch. Dave and Anni made it back for a third go and sent it but we had already headed home at that stage.

With time running out Sile and I went for one more long route on the recommendation of our French friends from the Goat. “The midnight butterfly”, on Myggapilleran, proved a great way to round off the trip giving a very bold start with some excellent well protected cracks/corners above.

Overall it was a great trip, the weather played ball, the climbing was fantastic, and we were in good company. Can’t wait to do it again someplace.