(by Dan Shipsides, 2010)
Hear some of the pioneers of Irish climbing talk about their experiences.

The voices in the tracks are those of Frank Winder, Elizabeth (Betty) Healy, Noel Brown, and Joss Lynam.

Noel talks about meeting IMC climbers for the first time at Glendalough.

Elizabeth talks about how life began when she started climbing.

Elizabeth reflects on how climbers perceive cliffs, and Frank reads some poetry.

Elizabeth, Joss and Frank talk about the protection used in the early days.

Frank talks about his injuries after falling off a climb on Knocknagantee, Co.Kerry.

Frank talks about his injuries after falling off a sea-cliff in Turkey.

Pioneers is an audio and photographic project by Dan Shipsides which focuses on the development of rock-climbing routes in Ireland.

Primarily based around conversations recorded with two of the most active climbers from the 1940s to 1960s period, Frank Winder and Elizabeth Healy, Pioneers creates a topographical and human narrative documenting a new type of landscape beginning to be defined at that time in the Irish mountains. Winder and Healy represent the Republic’s first generation of rock climbers – the first to be in a position to take advantage of a change in economical and leisure conditions in order to physically engage with the landscape in a way not due to economic or other necessity.

As described in the audio, the landscape was literally felt out with their fingertips exploring handholds, finger-cracks and employing particular climbing movements. These details highlight Frank and Elizabeth’s own sense of creativity – that their actions, their minds and bodies were creating or making something new. In that they are created and named, the routes themselves reflect and may exist as “artworks”. They can be read in terms of individual style, technique, context and vision, and can claim their place in cultural history. Through the sense of exploration and endeavour these climbers’ landscapes echo aspects of the modernist ideal but here they do so with a different poetic, one which is gentle, witty and reflective. It may be topical to compare the “national” mountaineering effort or ethic of the Irish Republic with the more bombastic efforts of older nations during that period. The activity of these climbers offers a “modern” representation of the Irish landscape and provides a contrast with the sense of “native belonging” found in many post-independence visions of Ireland’s natural landscape. 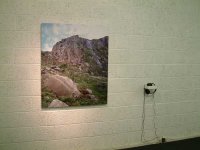 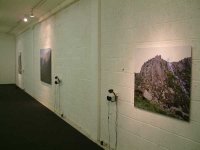 The work is in two editions: one first exhibited at Temple Bar Gallery, Dublin, in 2003, and the other was published simultaneously in Source magazine. For Source magazine the images were reproduced and accompanied by an audio CD to be played while the images are viewed.

The audio tracks do not aim to constitute an accurate document, rather they present the indelible memory of significant moments, friendships and places alongside nostalgic and less fixed reminiscences of that period.

Dan has kindly placed the tracks into the public domain. His website is at danshipsides.com.

This article was sourced from Dan’s page at danshipsides.com/DshipsidesWeb/pioneers.html and edited for the IMC website.