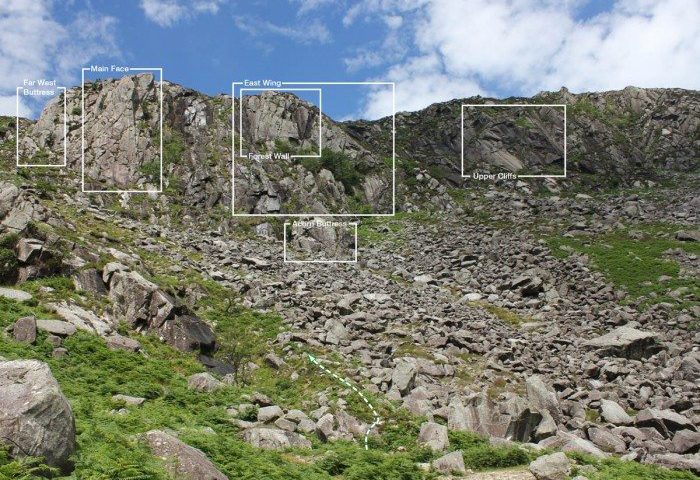 Although ultimately printed on paper, this book is truly a product of the digital age.  Throughout last year I followed its inception over Facebook & Dave’s own blog as crags, and the merits of the various routes on them, were discussed.  In addition, the production as a whole was open to debate with various topo photographs being optioned and even a discussion on the colour schemes for route markers (with consideration of the visually impaired).  It is this level of attention to detail that comes through repeatedly in the publication.

As a relative newcomer to climbing myself, and especially as we tended to go off to new crags by ourselves, the interpretation of route descriptions has always been part of the challenge of the climb.  Indeed, the idiosyncratic & euphemistic nature of route descriptions combined with distant blurred photos, criss-crossed by vague, thick dashed-lines, made me wonder if this was some kind of rite of passage into the climbing world; you can’t just go to a crag and climb something, you have to work for it?

In that respect, the topo photographs and route marking in the book are excellent.  The accompanying text gives good detail with appropriate insights where necessary.  Introductory rubric for each crag covers driving directions, parking, approach & descents together with any local conditions to be aware of (waves, midges, etc).

With any guide that attempts to cover the whole of Ireland, there will inevitably be quibbles over content.  But that restriction can also work to the book’s advantage as it results in a necessary reduction in the number of routes shown on any crag, focusing on the popular and representative routes.  A taster, and if a particular crag is to your tastes, you’ll go á la carte and buy the local guide.

Personally I found this even worked well for crags I had some knowledge of, such as Glendalough Main Face, where the number of routes can be intimidating for a newcomer; but reduction to a selection of choice cuts makes the whole crag much more approachable.  I initially imagined the market for such a book to be first time visitors, and in this respect it fits the bill perfectly (and, indeed, I have recommended it to a number of climbers I’ve met outside Ireland).  But I find it works equally well for residents.

In his introduction, Dave hopes that we will find the book “inspiring and informative” and that’s exactly what it is.  Not only does it make you want to climb yet to be visited crags in Ireland, it also makes you want to revisit familiar crags and try lines you’ve perhaps been ignoring or forgotten.  What better recommendation can there be than that?