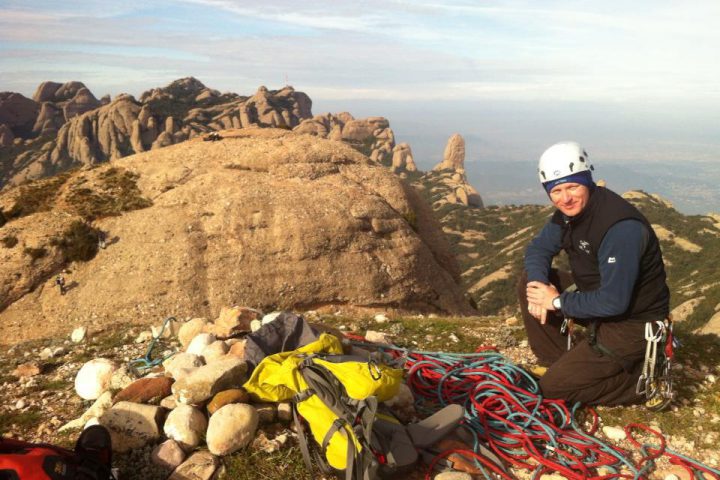 In the first of a regular feature on technical topics Rob Davies, a Mountaineering Instructor and long term club member takes us through how to build a good belay and discusses some do’s and don’ts.

Belays are the boring bit of climbing right? You get to the top of the route and all you have to do is tie yourself to some old bit of bush and bring your mate up… The sooner he/she gets up the route, the sooner you can get on another route so speed and efficiency is your friend, right?
Well I agree in some parts with the above. I much prefer the movement of climbing to the process of belaying but I would also say there is something very nice, especially on Multi pitch routes when you have built a great belay for you and your partner and everything is organised and where it should be. A bit like that first few minutes after you’ve cleaned the kitchen… before you ruin it all by making dinner!

So Lets start with the basics. I teach the acronym to my students of IDEAL. If a belay meets these 5 standards then it’s most likely safe or Ideal!

I: Independent. With a few exceptions you should build a belay with 2 anchors or more. These anchors should be independently attached to you so that a failure of 1 does not impact or shock load the other(s). There are a few techniques out there with balancing slings (American Death Belay… The name says it all!) that allow for you to equalise 2 anchors, without making them independent. Whilst this might be acceptable on Bolted routes its unlikely to be a good option on TRAD placed belays. See fig 1. I once saw a belayer who had multiple anchors attached to him fall several meters at the top of a Wicklow crag, when his second fell on a move gear ripped causing the entire belay to rebalance. The result was the belayer being pulled off the top of the crag and ending up 2 meters down the face. The second hit the ground! 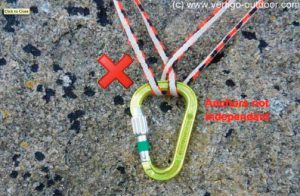 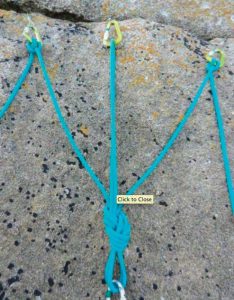 D: Directional. The anchors should be in line with the direction of the loading forces (your second). A common example of a badly used anchor that is not directional is the stake at the top of Yorkshire pudding used to protect Honeypot. If your anchors are directional and are loaded with a fall the forces are transferred straight onto your anchors and not onto you and there is no lateral force where the anchors and the load try to align themselves. It also means that if your anchors are at ground level, then you should most likely be belaying sitting down. Otherwise your legs are causing a redirection of the belay and are a potential hazard in the event of a loading, where your legs with be buckled by the anchors taking a load!

E: Equalised. When using 2 anchors or more it’s important to spread the loading equally. This is especially important when building the points using TRAD gear. If we load one more than another this can have a detrimental impact on the second placement. Perhaps having it slack allows the cam or wire to dislodge or move or in the event of the more weighted anchor failing, we then shock load the second anchor.

A: Angles. The one that everyone is surprised with! I won’t bore you with the math but I have included a Diagrammatic below to show what happens to the forces at varying degrees of angle! 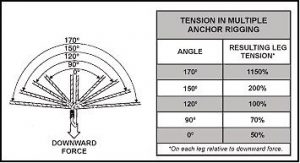 Bottom line is that 60 Degrees or less is the optimum. Once we exceed this we start to 2increase the forces on each anchor more than the 50% split we would like. Try his for yourself by holding the middle of a length of 10 meters or rope and give each end to a friend. Start at 20 degrees and see if you can pull them off their feet. They will easily hold your pull. Move out to 60 and you will still have little effect. However ask them to move to 90 and 120 and you will see a huge difference and may even look like you’ve developed super powers!

L: Loaded. You Have checked that each anchor is capable of taking the load you are going to subject to it. You’ve given it a good pull in the direction of loading and you’re comfortable it’s fit for purpose, then great! In Trad this could be a really good tug on the wire or cam. If it’s a flake of rock then it could be a kick in each direction

So, the above gives a good grounding for a safe belay. So let’s ask a simple question… Why 2 anchors? Surely that sling attached to the metal spike is ok? I’ve been using it solo for years now and nothing bad has happened to me yet, right?
Well the sling you attached to the spike hopefully is! You purchased it new and not on EBAY. It’s been well cared for. Tested to UIAA standards and is tested to 22KN. Now… Does that metal spike have a CE / UIAA marking? Has it been well cared for? Surely its not been sitting in water for the last 40 years. Is it corroded just below the surface to the point of imminent failure? Simply; we don’t know… which is why we spread our eggs between 2 baskets! Yes, it’s highly unlikely that your friend seconding Yorkshire is going to subject a massive force to the spike but when we practice good technique in Dalkey it sets us up for bigger things and shows the rest of the climbing and public community that we love adventure but also like stacking the odds in our favour!
The exception to this is the likes of the tree at the top of Thrust. You can think of others for sure. I wouldn’t add a second anchor to my belay if I had attached myself to the Tree with the rope or with a sling. My feelings are if I am attached to the tree with a 22KN sling and the tree falls off the top of the crag under load I have bigger things to worry about! Likewise I can easily stand and belay here as I can arrange my anchors above and behind me therefore allowing for the forces to be direction onto the tree in a standing position.

Hopefully the above gives you some food for thought.