It was just before 3 o’clock in the afternoon. Kieran standing to one side untying his rope, Eileen on the final steepening leading to the summit plateau, the sun shining, the wind a mere whisper, thin mist forming and dispersing around the impressive ice-encrusted cliffs of North-East Buttress, Observatory Ridge and the Orion Face. It was the stuff of dreams. Then, as if to celebrate the moment, a perfectly-formed Brocken Spectre appeared without warning on the thin clouds that were briefly hugging the upper rocks of the ridge. I stared, distracted in wonder at the sheer beauty of what was before me. Too late I fumbled for the camera. The ghostly image and its halo-like shadow faded as quickly as they had formed, not to reappear. Recalling something read years ago about coming to the great cathedrals of the mountains not to conquer but to worship, this was indeed a moment to treasure.

Tower Ridge in Winter. A route of great tradition and history, it still possesses an aura of mystery and had been on my mental tick-list since my first experience of Scottish winter climbing in the early 1970’s. No longer considered technically difficult, it is by no means easy pickings. My visits over the years had never even been rewarded with conditions decent enough to tempt us up to ‘have a look’.

Many have struggled hard on this route and felt only a sense of relief on crossing the fabled Tower Gap knowing that all the difficulties were at last behind them and success was finally assured. Others, like the IMC party of precisely 12 months, to the day, previously, have had the misfortune of finding the ridge in one of its less benign moods – the wind, cold and blizzard of what Hamish McInnes famously called “Full Conditions”. On that occasion, the consequences of a particularly violent storm were benightment at the Tower Gap followed by an arduous and lengthy rescue.

For us, as departure day the 13th of March approached (hmmm, 13th lucky for some), the weather was already shaping up well. Sunny, settled and likely to last – thanks to your local friendly continental High-Pressure system. Continental systems are more reliable and generous than their dodgy cousins, the Atlantic Highs, which we all know can play tricks on unsuspecting mountaineers leaving them floundering in cloud when sun was promised. By a stroke of good luck (thanks, Eileen) we had put the trip back a week to Paddy’s weekend. Going earlier, we now knew, would have resulted in another of those monotonously depressing, wet, dismal trips for which Scotland in winter has become infamous. Frequent sad tales of washed-out climbing plans have prompted many of today’s young things to seek their pleasure on the frozen waterfalls of remote alpine valleys rather than in the manly challenges of Scottish winters!

Intent on giving ourselves every chance of success, we treated our attempt as an alpine route. Indeed it has many of the same qualities – remoteness, a serious feel, the certainty of a long day (guidebook time is 6–10 hours for the climb) and no guarantee of success right till the end. We first found the new car-park at Torlundy on the eastern (Aviemore) end of the golf club and we reconnoitred the initial hour or so of the walk towards the Allt a’ Mhuilinn. Though determined to make a dawn start, none of us actually knew what time dawn was at!

Next day, Friday, we were at the carpark at 6.15am having driven the 35 miles or so from Laggan Bridge – roughly half-way between Ben Nevis and the Cairngorms. We had chosen that location to give ourselves climbing options east to the Cairngorms and west to the Ben! The carpark was already alive with early starters like us and those who had stayed overnight and who were just waking to a cold frosty morning. Temperatures were down to minus 8 or so.

It was daylight as we set out at 6.40. The walk-in with full packs quickly got the blood flowing and gradually hats, gloves and top layers were put away. Less than two hours later we were at the CIC Hut. Not bad going. We stopped for a break and were quickly forced to add back the layers as mist obscured the highest ridges and a truly bitter wind raced down and whistled menacingly in the wind vanes of the Hut. Maybe the day would not turn out as well as we hoped! A tentative suggestion from Eileen that a tea break was in order was quickly scoffed at as we resumed the trudge to the foot of the Douglas Boulder. Boulder? Well, if you count things that are 600 ft high with routes that can take a full day to complete.

Rounding the Douglas Boulder into Coire Leis and the foot of Observatory Gully, we continued to follow intermittent footprints before cutting off right across avalanche debris to begin the climb proper. We had in fact passed the normal start but had no intention of deliberately losing height in the interest of purity! At 9.30am we were ready to rope up but before doing so we did finally allow ourselves the luxury of a cuppa. Being unlikely to stop for lunch on the ridge itself, it was wise to get food on board now. The sandwiches were a challenge. Too much for me at this early hour, my eyes were instead drawn to the magnificent line of Point Five Gully, easily the most famous of the classic Scottish ice climbs. With modern tools, it may no longer be the challenge it once was, but it’s undoubtedly still a physical and mental test. One for next year maybe!

The lower parts of the ridge are straightforward. Well defined, the line is never too steep or exposed. Here the guidebook urges moving together in the interests of speed. We were delighted to find there was no one ahead of us. Footprints were all several days old. For the moment too, it seemed there was no one behind. As a party of three, one of our concerns was to move quickly and not be overtaken by ropes of two, thereby leaving us at the back of a queue for the Eastern Traverse or the Tower Gap.

The higher we climbed the more the wind died away and soon the sun was working its magic on the snow-covered ridges and gullies to sharpen the perspective all round. Tempting as it was to stop and admire the scenery, we continued to push on, passing one or two spots where pitching it was the safer option. For those few short stretches, the two behind moved together to ensure that little time was lost. On Tower Ridge, as in the Alps, safety lies in speed as much as anything.

We were enjoying ourselves in the perfect conditions we’d found. Even the snow had a crispness born of the heavy frost the night before. Then all too soon, it seemed, the prow of the Great Tower appeared and we knew we were already approaching the crux pitches of the climb. These come one after the other and offer a startling variety of climbing in a short distance. First is the Eastern Traverse. In good conditions it presents no major obstacle but the yawning drop towards Tower Gully demands care and attention. Next up is negotiating the jammed boulder followed in the same pitch by a steep and demanding wall leading (in one long or two short pitches) to the summit of the Great Tower. From here a narrow crest leads out to the Tower Gap which again is not technically difficult but the exposure on both sides and especially the prospect of a drop into Glover’s Chimney provides memorable atmospheric qualities.

A 20/30 minute wait at the Gap was forced on us by a party of two finishing up Glover’s Chimney. For his belay, the leader had chosen to occupy the blocks used to traverse the Gap – though in reality he didn’t have much choice. Even this relatively short hold-up resulted in a queue forming. Despite the delay, we were fully relaxed knowing that we were next, that it was early and that we could fully enjoy the magnificent mountain scenery all about as we waited. 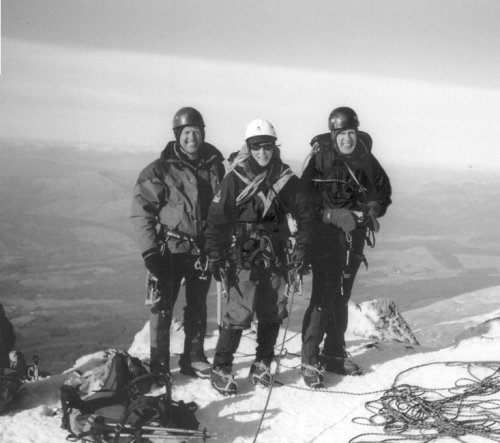 Finally we were across the Gap and moving again on the easy slopes leading to the summit, which by now was bathed in sunshine under a clear blue sky. What more could anyone ask from a day in the hills? An hour later, as the sun began to set, we dragged ourselves reluctantly away from the ruins of the summit observatory and began the descent of No 4 Gully and the three-hour walk out. A final piece of good fortune ensued when we met a friend of Kieran’s at the upper carpark and got a lift down the last section. Ah, bliss.

The images of the day were still burning brightly in our minds as we finally settled down to a well-deserved night’s sleep.