(by Allister Gerrard, June 2008)
The infamous Howling Ridge, a coming together of a great day’s hill walking with rock climbing on a fabulous mountaineering route to Ireland’s summit, Carrauntoohil (1039m). 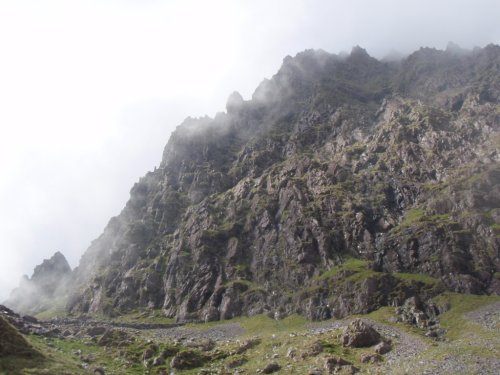 Howling Ridge is regarded as one of Ireland’s finest mountaineering routes, mostly a summer route, however originally first climbed by local man, Con Moriarty, in winter conditions, in the days when it got plenty of snow. The climb itself is approximately 430m in height gain of climbing/scrambling from the Heavenly Gates (approx. elevation 610m ) to the summit, apparently with eight pitches – must have missed one or two, or done two in one! Duration for climbing the route can vary from a reported 20 minutes up to 8 hours (The I.M.C. party of Tony Barry, Willie Whelan, Dairín Currey and company previously climbed it very respectably in under 2 hours, in the rain). It took us that and the rest, conditions were good, and we were under no pressure for time, so took it leisurely.

We were unsure of how long it would take so an early start was required to leave plenty of time ‘just in case’. It was the June bank holiday weekend. We all set off from Lisleibane at 9am, Joe, Jimmy, Sandra, Joanne, Emma (family), Aileen, and myself. It was a warm morning with a gently cool air, a long away from the hustle and bustle of the M50 & city mayhem; what a life. We walked up deep into the Hag’s Glen up almost as far as the two lakes. Our group spilt up here and one party set out for a day’s hill walking headed for Carrauntoohil via the Devil’s Ladder. Aileen and I broke off west of the lakes, destination ‘The Heavenly Gates’.

The Heavenly Gates, GR 807 844, marks the start of the route of Howling Ridge to Carrauntoohil’s summit. The walk up to Heavenly gates turns right before the two lakes in the Hag’s Glen are reached. Picking up a track that swings around to the west of Loch Gabhrach, the track gradually steepens with a little scrambling. The track then dwindles for a short spell of steep ground, which is easy scrambling until the track is picked up again leading to a plateau below Carrauntoohil’s steep north-east cliff face. Turning southerly at this point, the steep scree must be scrambled up to reach the notch below the ridge itself – the Heavenly Gates. It can be reached from Lisleibane in 1.5 to 2 hours. We took a generous break at Heavenly Gates, racked up and started around the corner, a few metres left of Heavenly Gates (on Collins gully side), an easy start point. On the left side of Howling Ridge it drops off into ‘Collins Gully’ before rising back up to another rocky sharp ridge, ‘Pipets Ridge’ (Easy to hard scrambling, with a section of Severe climbing). On the right side of Howling Ridge it drops off steeply again before rising up to form another ridge, ‘Primroses Ridge’ (rated VS). 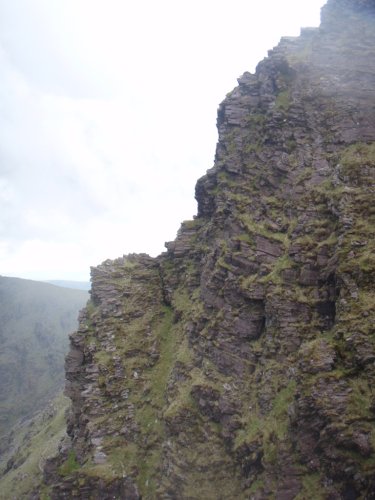 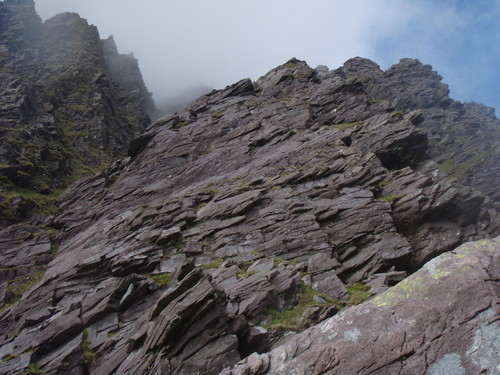 The first pitch is mostly a scramble, however we were roped up and moving together, throwing the odd sling around a spike, thread or alike; one short diff climb reaches the first plateau. 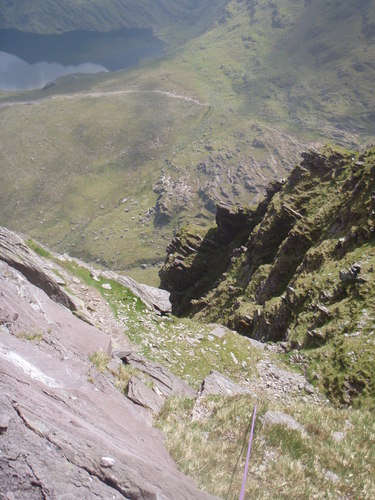 The view down after the first pitch 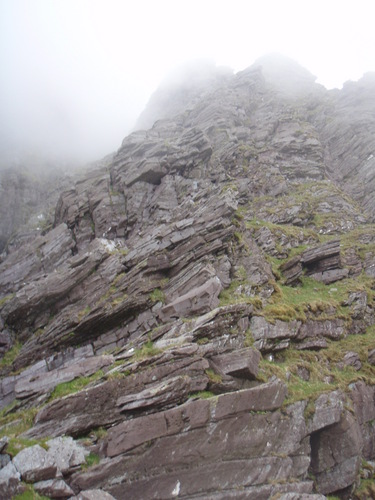 The second pitch ahead

Moving together again, we shortly reached the second pitch which proved the first real challenge, a short but steep bit of V.Diff exposed climbing. The rock is very loose all the way up, so when making moves and placing gear it is advisable to check & re-check the rock. I generally used a selection of gear, lot of slings, larger nuts, friends and the odd hex; we were fairly well protected throughout, taking the slower but safer options in placing gear and pitching. The rock friction is quite good; dry and very slabby, with lots of what can be described as slates of sandstone piled on top of each other, handy for jamming the odd friend in, provided they ain’t loose. The exposure is not to be underestimated; for me, this was the biggest eye-opener, the drop-offs are huge in places and consequences of a fall undoubtedly serious to worst-case scenario; however, gear placements can be found however seemingly sparse at times. The views are magnificant and are thoroughly appreciated when belaying, if you’re lucky enough to have breaks in the cloud, which we had at times on and off. It can be climbed in boots or rock shoes, depending on conditions. I opted for walking boots and found them comfortable. It could be a long day in rock shoes; although others have used rock shoes without complaint, I didn’t really miss them. We used a 60m rope with both of us carrying coils throughout, however a 30m rope would probably be more ideal. I found the 60m rope a bit cumbersome at times and extra weight! The next pitch is longer but interesting; you just have to route-find yourself, and I did a bit of zigzagging on the route or choosing one line, of which you could have tried several at different points. 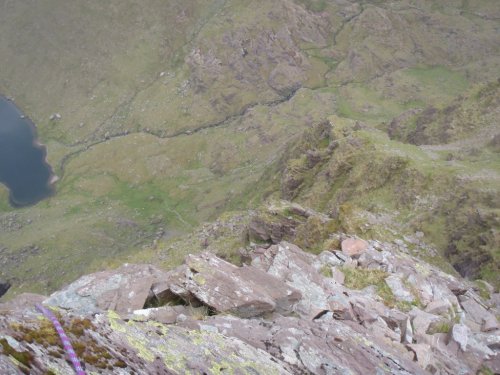 View below after the third pitch

The route generally goes upwards oddly enough, sticking to climbing on the rock and centre of the ridge. I found there was a lot of rope drag, too many turning of corners I reckon, and longish pitches. The route continues on with pitches and slight plateaus and scrambling, eventually coming to one of the last pitches which towers above; nice exposed climbing leading up to what is known as ‘The Finger’ (like a closed hand with a sharp index finger of rock protruding out). At this point the long week at work, sleep deprivation and the drive down the day before (advisable to leave early on a bank holiday Friday and head the Cork road to Killarney) began to take its toll, and a much-needed break while belaying helped to recuperate before tackling the next pitch up to tThe Finger. 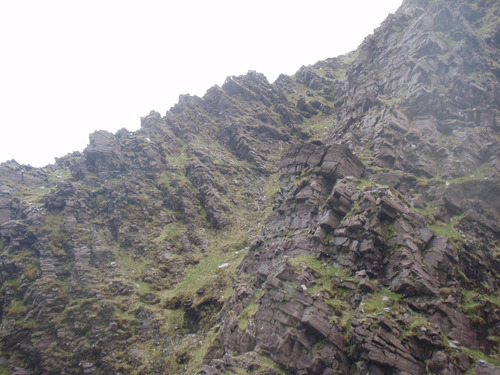 On Howling Ridge, with Pipets Ridge on the left 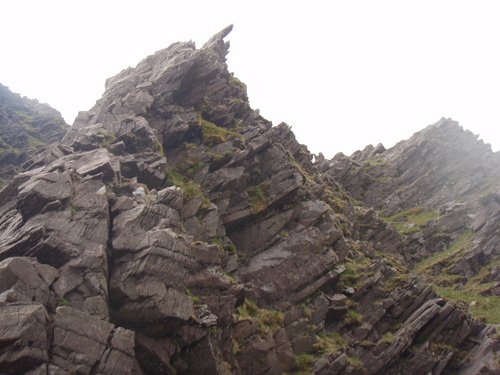 The next pitch up to The Finger

At The Finger the rock generally flattens out, sloping slightly downwards in the direction of ‘Collins Gully’. After walking across, there are options; drop into Collins gully (which I understand can be protected) or traverse to the left leading to Diff climbing on an exposed ridge above Collins Gully, which I understand is easier but loose and badly protected. We decided after walking cross the series of protruding rock after the finger to veer off around to the right of the next rock tower (on the opposite side was Collins Gully on the left side of the rock tower/ridge). We traversed around a few metres and found a grassy gully, which we scrambled up, then a couple of rock steps, generally keeping to the ridge line, which is all scrambling or moving together after the top of Collins Gully. After a short while, the ground widens, exposure vanishes and we stopped and got rid of the rope, which we had been tripping over for the last section and was becoming a nuisance. We packed the gear away and scrambled the last section to the summit. Unfortunately the cloud covered the summit; however, we enjoyed a bit of R&R. 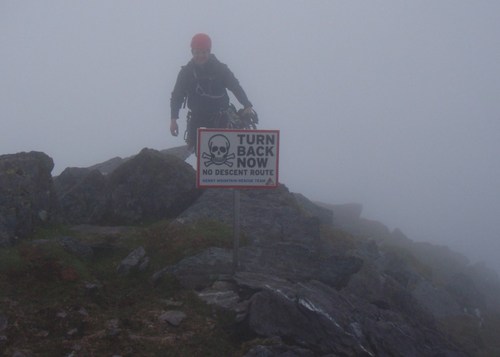 Nearing the summit – go back! 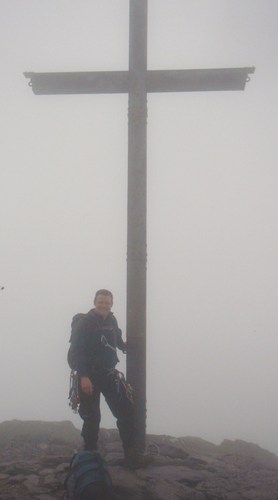 Allister on the summit of Carrauntoohil

The weather had held out well in fairness, as thundery showers were forecast in the afternoon. We got the thunder and even a spot of rain however were lucky not to get showers, which would make the climb a more serious undertaking and less enjoyable; pick your forecast if you can!

Incidentally, the name apparently derives from when Moriarty’s dog ‘Grimsel’, a Kerry husky, had followed to the foot of the ridge but was unable to go further, and instead was left to ‘howl’ below.

We returned to Lisleibane via the Heavenly Gates track from Carrauntoohil’s summit and back to Killarney for some well-earned grub and pints! A fitting end to an enjoyable day and we enjoyed the rest of the weekend in good weather.

References and acknowledgements:
Denis Lynch’s Munster’s Mountains details most of the best scrambling and climbing routes Munster has to offer. Thanks to Declan Cunningham, Tony Barry, Barry Watts, Gerry Galligan and James Flanagan for previously sharing their own experiences of the ridge.