The bus brought us from Chamonix up the valley to les Praz, from there we boarded the cable car to la Flégère. The cable-car was the biggest I had travelled in; it was more like a tour bus, in comparison the cable-car from la Flégère to the Index was the smallest. The way it worked was, if you can imagine yourself standing in the middle of road and a JCB creeps up behind you and scoops you up off your feet into the bucket. It’s not a good idea to wear shorts on these micro cable-cars as there is a gap where your pegs (legs) dangle and the draught would freeze the … of a brass monkey.

After being dumped out of our JCB bucket at the index we made our way up to the starting point. This involved some scrambling and crossing over snow fields. While crossing one of these fields we observed some workers high on our left; we were not sure exactly what they were up to but there was a sign saying beware of falling rocks so we moved on swiftly. As we neared our destination Diarmuid who had fallen behind a tad arrived up with a gash to his knee. His sun tan had been replaced with a whiter shade of pale (name the singer who sang Turn a Whiter Shade of Pale), so the group set up a field hospital. Responsibilities were delegated, Penny/Kieran would operate, Séamus provide cover and Moira/Elaine would provide TLC. The operation was a complete success although he still has a limp to this day (just kidding). Shortly thereafter we arrived at the starting point of the route; unfortunately, so did the rain. 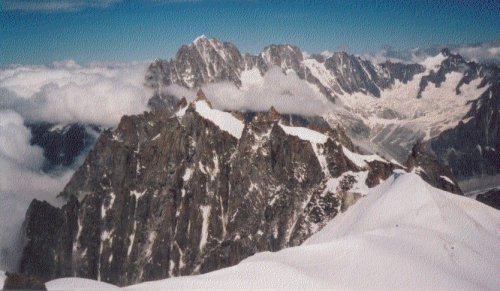 Change of plan was required; go back the way we came or into the unknown, we decided on the latter and dropped into the valley. We dropped down further that we had planned and things went a bit askew. The rain came in earnest; it ran down my pegs and water-logged my boots; my shorts and jocks were in a similar condition. We continued on and on and on we believed we were following the map route until we realised that we had gone off the map or were very close to it.

The weather continued to deteriorate and our bodies were feeling cold and sore. We spotted a building up the valley, it was on the opposite side with a wide meandering river separating us. We continued on up the valley and then realised it was no ordinary building but a 5-star cowshed. After some discussion and agreement the decision was made to continue, as there were a few hours of light left. The cow shed would give us an alternative if all else failed.

Today is my 25th wedding anniversary. What a way to spend your wedding night a quarter of a century later, in a 5-star cowshed. Colleagues aside, you would have the company of prime French steak in the form of bullocks and heifers. Just think of the implications of a night in such fine company; the explosion of gases, which are contributing to the ozone damage would be serious, especially if there was naked flame about.

But for some super micro and macro navigation by the ladies in the group the cowshed could have become a reality. We were now back on the map and following a route up the steep valley, first on grass and then on scree. The mist came and went at will hiding our route and our next destination, the col in the distance. The ascent was about 700m and it led us to the Col de Bérard; we were now back on track but not home and dry yet.

At the col a signpost pointed to the Réfuge de la Pierre à Bérard, 1.5 hours away. It was a steep ascent over wet and some very slippery boulders, however our spirits were lifted with the thought of a warm meal and bed beckoning in the refuge. The trek to the refuge was completed in 50 minutes. The bullocks and heifers could keep their 5-star cowsheds along with the methane gases.

There was still some light so all agreed to continue to the road and back to civilisation. Before setting off from the refuge we had soup and sandwiches and changed into any dry clothes we had in our packs. A phone call back to the campsite in Chamonix advised them that all was well and would it be possible to get some transport to meet at an agreed rendezvous point.

We made a dash for the road (4km away) and reached the rendezvous point, which was a hotel. A further call was made back to Chamonix who advised that there was transport on the way to meet us. Realising that 6 adults with gear would be a squash, Penny and Moira decided to flag down an unsuspecting motorist, which they did very efficiently. Shortly thereafter Clare Torrens and Harry O’Brien arrived. What a sight for sore eyes, legs, arms, hips, etc, etc, etc. We arrived back on site at 10.35 and ordered pizzas and beer. Our day had been 12 hours long, spent mostly walking and scrambling, what a way to spend a wedding anniversary.