(by Allister Gerrard, fromIMC Newsletter Spring 2012)
“A camp that’s short, sweet and spontaneous sometimes works out for the best; it was one of those times – just good craic!”

Early in March 2009 I decided to hold a winter camp in preparation for a winter climbing trip which had been planned for one week afterwards in Scotland. I had first rounded up a few interested parties and then placed a post on the Irish Mountaineering Club forum. Even with only a few days notice to go I got quite a bit of interest. A couple of people had to pull out and it settled as a party of eight for the camp. 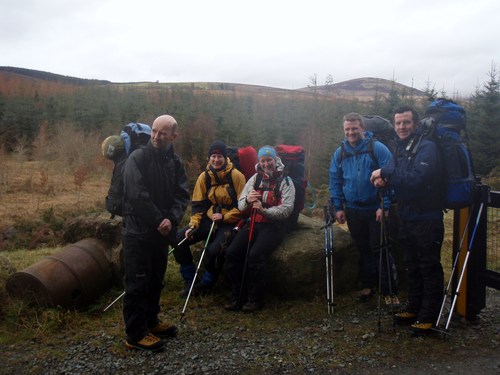 I set out with Aileen Moloney, Martina Duignan, Martina Michels, Tony Groves, Tony Barry and Pádraic Gibbons. Declan Cunningham joined us later on that night. We parked at Aughavannagh at the southern end of Lugnaquilla. We opted for the lower track through the forest. This track exits about half way through the forest, which meant following the river and then crossing it in its full winter flow. The upper track (a right at the first junction) is the quicker and more straightforward route. The upper track exits at the other end of forest and leads to the South Prison.

The day started off mild, even warm. Rain began as we approached open ground heading for our camping spot, a plateau in the South Prison area. We were pitching tents from around 6.15pm and just as it was becoming dark. By the time we got into our tents we were well soaked from three showers. We were glad of the shelter and the opportunity to peel off our wet layers and put on dry clothes. We had planned to bring ice axes, crampons and ropes for a route on the South Prison; however we decided to leave the extra gear behind as there was little snow on the mountain. There were frequent showers that evening, some very heavy, and gale force winds. At 8.30pm we decided to ring Declan while he was en route to join us. We let him know what conditions were like, but he was undeterred. Fortunately things had eased off and visibility had improved by the time Declan started walking up to us at 10pm.

Back at camp a dinner of scrumptious hot chicken with black bean sauce and fresh vegetables was ready. It had been pre-cooked earlier that day by Aileen for the whole group. It was delicious and much appreciated by all. On that winter night, even Gordon Ramsey himself would have been full of compliments. Tony B took out his wee bottle of whiskey which he shared with Pádraic and me. After a while we went to our respective tents to chill out.

Visibility had improved by that time, so I went for a stroll to check out the area around the camp and so that I could advise Declan in case it became necessary. The three girls could be heard giggling away to themselves, squeezed into Martina M’s tent for hours, and knocking back the hot whiskey. On the way back from my stroll I popped my head into Pádraic’s tent and he invited me for tea, so I had some hot whiskey instead. For the record, I never drink hot whiskey in the hills and it was purely to help with the chill and to be sociable! We chatted over a couple of hot drinks about our plans to tackle some Scottish winter climbing routes in a week’s time.

After a while, I left Pádraic’s tent. I had assumed it would take Declan another hour to arrive. Suddenly in the distance, I could see a head torch fast approaching, if I had stayed put and it was Paul O’Connell or John Hayes he surely would have knocked me out flat. Declan arrived at 11.30pm. It was late and he was tired and weary after the day. We bundled him into a tent to relax and Aileen and I swapped stories with him over even more hot whiskeys. After an hour or so, he jumped in with Tony B, who had a spare spot for him and to save Declan pitching a tent so late. 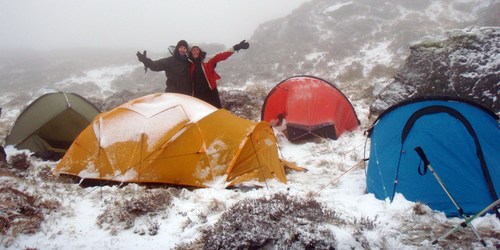 At 7am the next morning the snow was falling thick and fast. I could hear Pádraic’s Jetboil in the distance, getting ready to make the tea (or whiskey, only joking). I put the sausages on; it was like the miracle of the loaves and the fishes sharing them out. Tony G got stuck into the full monty of duck eggs and bacon. Tony B and Declan left at 9.30am with the intention of making it back to the metropolis for 2pm. They headed for Lugnaquilla summit, returning by Slievemaan into Aughavannagh, and they made good time. The rest of us broke camp at 10.30am; for us it was a more sluggish, leisurely start. We headed through the snow up to the saddle to the east of the South Prison. Our plan from there was to take the same route as the party ahead of us. Up on the saddle we were bombarded by hard cutting snow, piercing to the eyes. In the high winds, it was difficult to stand up or even see, and so we decided to head back down. We had enjoyed ourselves and did not feel the need to push it any further that day; there would be time enough for hard going in Scotland! We headed back down, taking the upper track through the forest and we reached the cars before the others. We went to the IMC hut for a quick cuppa and a tidy up before heading back to Dublin. A camp that’s short, sweet and spontaneous sometimes works out for the best; it was one of those times – just good craic!

Pádraic Gibbons, Tony Barry, Aileen Moloney and I went back again in March 2011 for another IMC winter camp on Lugnaquilla. This time we had a frosty summit and a fine sunrise. We headed up from Fentons in the afternoon, just before dark. Tony followed us up in the dark! It certainly was a very pleasant night camping on the summit of Lugnaquilla, something we could not do in 2009 because the weather had been too wild. 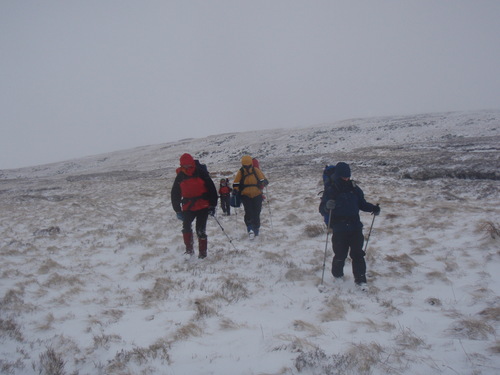