(by Ben March, from IMC Newsletter Spring 1999)
Witnessing a rescue from a Kerry mountain storm. 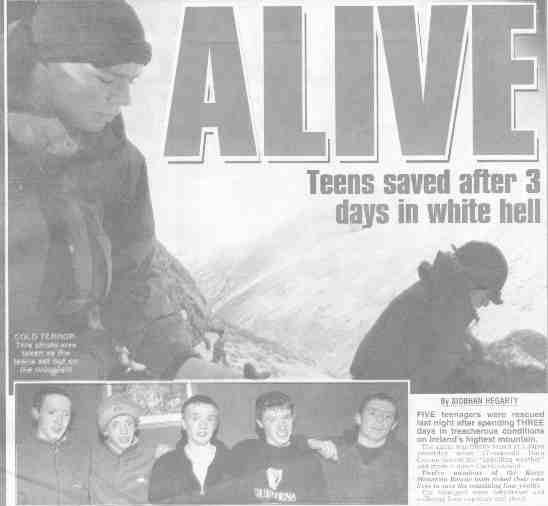 At 7am on the morning of Tuesday, December 29th, 1998, Frank Power, Dermot Sheils, Séamus Crowley and I, all members of the IMC, sat in a rocking car at the foot of Carrauntoohill. As the car was buffeted by wind gusts of up to Storm Force 9, horizontal hail peppered the windows, and beside us, a full-sized galvanised farm gate slapped back and forth, threatening to unhinge itself at any minute and cheesegrate Frank’s nice new car. Undaunted, Frank produced "Travel Connect 4" (what next!) and we settled down to see if dawn would bring any let-up in the ferocious wind.

Meanwhile, unbeknownst to us, on the shore of the tiny corrie lake by the Eagle’s Nest, some 650m above us, a drama was unfolding. Five young Dublin climbers, some of them known to us from the UCD climbing wall, were caught in the very teeth of the storm. Wind howled around the 200-metre high walls of the corrie where they had chosen to camp (situated between Carrauntoohill and Beenkeragh) and slammed into their tents from every direction. As the temperature rose, snow and ice on the slopes above them melted and joined forces with torrential rain and sleet which sluiced down through their camp.

The five young men, Eoin and Darragh Curran, Conor and Dónal O’Shea and Ben Griffin, are aged between 16 and 18, and all hail from Templeogue in Dublin. They are all experienced mountaineers, although only the Curran brothers were familiar with the Reeks. On the night of Monday, December 28, they had camped in the Gap of Dunloe. After a late start the following morning, they walked though the Black Valley, and started their ascent of Carrauntoohill from the Southeast. They had no radio, and were first made aware of the approaching storm on meeting another party descending from the peak by the shore of Lough Callee. On voicing their intention to camp by the Eagle’s Nest, members of the second party assured the lads that they would probably be able to weather the storm in the shelter of the corrie.

They summitted Carrauntoohill at about 5pm, just as dusk fell. They then began the difficult descent of Shay’s Gully, thick with snow and ice, in rapidly diminishing light. They reached the tiny lake in the corrie at about 7pm, and, in deference to the impending storm, briefly considered descending further to the mountain hut that lay just a couple of hundred metres below them. However, they didn’t fancy the precarious descent past the waterfalls in the dark. Lulled into a false sense of security by the apparent calmness of the night, they decided to pitch camp on the flat rocky outcrop just above the lake. The lads spent the next couple of hours preparing food, and generally settling in for the night. As they went about these mundane tasks, they became increasingly aware of the rising wind and rain outside. By ten o’clock, the full force of the storm broke over them. The wind rushed in from every direction, delivering sledgehammer blows to the thin material arrogance of the tiny tents. In that cauldron of storm-fury, something had to give. A principal tent-pole in Darragh Curran’s tent bent, then snapped in two. As he rushed outside to investigate, a gust through the open door caught the tent, spinnaker-like, ripping the pegs from the sodden ground, and sending the tent and its remaining occupant skidding towards a sharp drop into the maelstrom of lake water below. Darragh reacted quickly, and collapsed the tent. His companions followed suit, knowing it was only a matter of time before their tent was also flattened by the storm. In a mad flurry of activity, they simultaneously extracted their survival bags from the wreckage whilst piling anything heavy they could find onto the madly flapping fabric. For nine interminable hours, the lads crouched huddled in their survival bags, periodically checking on the well-being of their comrades through the screaming wind.

When I interviewed Darragh Curran, he was characteristically silent on any fears he must have had for the ultimate safety of the group. One can only imagine the terrible, desolate atmosphere of the place at that time.

Dawn finally broke, and the party prayed the storm would abate. It stubbornly refused to oblige. One aborted attempt to descend was thwarted by the wind-whipped spray from the waterfalls drenching the descent route. The lads finally mustered the necessary determination to make the nightmare descent to the hut which they all reached at just after 10am. They spent hours there in deplorable conditions, ankle-deep in sheep droppings, sparsely equipped with the few sodden items they had managed to salvage from the destruction of their camp. Meanwhile, my friends and I ambled around Muckross Lake, picked our way through wind-downed branches, and thanked our lucky stars we weren’t above in the invisible mountains which surrounded us in the clouds.

At midday, Darragh Curran and Conor O’Shea were chosen to go for help. It took them two and a half hours to reach Cronin’s farm in zero visibility. They had crossed two rivers in furious spate. The three remaining climbers were finally reached by their rescuers at around 4pm that afternoon. All were suffering from signs of hypothermia and shock. It took six stalwart members of the Kerry Mountain Rescue to recover their waterlogged gear (Not something they make a habit of, so don’t expect it!).

That evening, the lads faced a hungry press-corps with enviable aplomb. The next day, several tabloid newspapers, delighted to have a saleable story during the post-Christmas silly season, would make front-page news of this affair, taking the lads to task for risking the lives of the Kerry Mountain Rescue team. Meanwhile, to his credit, Paul Curtis of the KMR was far more magnanimous, praising the lads for their obvious enthusiasm and youthful experience.

The following morning, Frank led our group, this time with a new member, Déaglán O Dónaill, on the Reeks walk in glorious conditions. (In the meantime, Séamus had succumbed to the ‘flu). From the saddle above the corrie, we could look down on the brightly-coloured remnants of their camp scattered about the lakeshore like so much flotsam and jetsam. There are probably no better words to conclude this tale than those of Paul Curtis himself. I paraphrase: "In a few years time, these lads will have passed us all out. When they return, I’d love to bring them up a route myself. In the circumstances, they behaved remarkably in a remarkably responsible way".

All the lads wish to acknowledge the bravery and dedication of the KMR, and thank them heartily for all their help. They also assure me that they will be returning to the mountains at the next possible opportunity.

As for me, well, all I can say is : "Gentlemen, I take my hat off to you. I’ll see you out there sometime!"