(by Pauline Delahunty, from the IMC Newsletter Autumn 2001)
A personal account.

I rarely think about what I say. In fact half the time I bypass my brain completely. My mouth takes off on its own, spewing verbal vomit over everyone, leaving me to deal with the fallout. Mostly, that fallout consists of bruised egos, some shocked moral standards or a dented reputation, and more often than not, these injuries belong to me. I’ve learned to live with the flaw and sometimes even laugh at the scenarios it creates. This was not one of those more humorous times. On this occasion my mouth got me into trouble. Big trouble. Trouble of the life threatening kind.

Sitting around a camp site in the Swiss Alps with fifty other Irish climbers is an exciting place to be. Routes are planned, equipment checked, adjusted, repaired and rechecked. Rucksacks are packed and repacked, each item ruthlessly judged for its weight versus necessity. Weather, snow and even avalanche conditions are discussed in earnest. Health issues are of the utmost importance as people become very aware that their body is a their most vital piece of gear. Most notably, are the compelling stories of death-defying feats and epics of high altitude adventure which are recounted and exchanged.

It’s a wonderful feeling to be part of the MCI meet. However, being relatively new at the mountaineering lark and being acutely aware of my own mortality, I tend not to stick my neck out. I have a secret desire to live for ever and so far so good. Then my big mouth decides to stir things up. In the midst of the bustle and chat I heard a confident earnest voice say "I’d like to do the Fiamma". I nearly laughed when I realised the statement came from me.

The Fiamma is a skinny flake of rock that sticks straight up out of a 2,500 metre mountain called Spazzacaldera. There is just enough room on the summit for one person to straddle the rock and if that’s not heart stopping enough the top is an independent boulder which sits on the flake and has been known to wobble.

A reply came in the form of a Northern Ireland accent "Aye. I’d like to do the North East Ridge of that. Let’s do it tomorrow so." The accent belonged to one Coryn Armstrong who had previously informed me that he leads E1, ergo way out of my league. "Great" says I, not being able to admit that when I said "I’d really like to do the Fiamma" what I meant was "I’d really like to do the Fiamma if I was a competent climber with a fit and co-ordinated body and a spare life in my back pocket". I didn’t mean that I’d actually consider doing the climb, much less the North Ridge and forget about liking it.

Caught in the headlights of my own ego, I could not back out now. Coryn very matter-of-factly continued "so I guess we’ll leave around 10.30 in the morning. You will of course need your climbing shoes, harness, some extenders, I’ll bring the lead climbing gear and I have an 8.5mm half rope. That’s a bit thin but it’s light which is obviously an advantage. It won’t take a hard fall of course, but its strong enough to take a slide, so it will be fine."

"Great" I croaked feeling a little bit nauseous trying to digest the bit about the rope not being strong enough to take a fall.

"Great" I replied. Why was I saying "Great" when I meant "No Fucking Way"? Still preoccupied with figuring out a way of getting out of this without losing face, I started the scramble. It was a grassy slope and not very steep, I knew I could handle it. I was cool. The gradient became a little bit steeper and the knot in my stomach tightened. Coryn was way ahead and out of sight, I shouted at him that it might be an idea to stick in an oul’ piece of protection (like before we plummeted to our deaths some 800 meters below). I tried to sound casual but I’m not sure Coryn bought it.

The real climbing started shortly after that. Coryn shot off clipping in to fixed bolts as we ascended. Following behind, I unclipped the gear, getting a frequent bout of disco leg. Elvis would have been proud. My mother would have killed me (had I not been making such a good job of that myself).

"Don’t look down", I thought. I rigidly adhered to this rule all day, knowing that the moves are easy enough, it’s exposure and the views that are the thrill for most climbers on this route. If I didn’t look down, I reckoned I had a serious advantage over those other climbers, so I stuck to this policy.

We climbed on, stopping occasionally on wider ledges for a chat. Coryn, despite his young age, had an impressive and prolific climbing career. As a result, he has more than a few high altitude adventure near-miss adventure stories. My favourite was of his friend Eddie who didn’t have a bog about the wonderful world of mountaineering (I identified). Eddie forgot his water bottle on one of his first Alpine endeavours. Not a bright move. Eddie and his buddies were climbing the ‘Barres des Ecrins’ a 4,000+ metre peak of considerable adversity. The final three hours of the route are a rocky ridge with sheer drops on either side. Given the height and the difficulty of the climb, most people understandably travel light. Eddie however, on reaching the summit, and amidst some slagging from his mates over his water-bottle error, reached into his back pack and casually extracted a stove and pots and began to melt snow. Class.

I was surprised at how quickly we ascended. The summit was rapidly getting closer and it looked like we would finish the route in fine time. As this glimmer of hope was emerging, disaster struck. I was happily(?) climbing a chimney of rock. There were two huge grooves running almost parallel, so with one hand and one foot in each I was shimmying up feeling about as secure as I could at 1,500 metres. The cracks gradually began to diverge. I stuck with them hoping they would reunite but they didn’t. It got to a point where I was spread-eagled, hugging the now very wide central column, koala fashion.

"Eh Coryn," I tried to sound normal with one cheek pressed firmly against the rock face and my heart about to leap out of my chest "I’m about to make a dodgy move. You got the rope secure up there?" I received a completely incoherent reply from an out-of-sight Coryn. He was too far away for me to hear him. I thought I would repeat my warning seing as how my life depended on it. "Okay, I’m going to move now" I shouted not moving an as much as an eyelash but beginning to slide down all the same. I got another muffled response. I wondered how much slack there was on the rope before it would tighten and hold, then I wondered if it would hold. I decided not to leave gravity win without a fight so I dubiously removed a shaking right hand and slowly transferred it into the left crack Feeling around for a good hold I was rewarded with a generous place to wedge four fingers, a gift from God. I then found I was able to pull my right foot over and get two feet in the left-hand groove. Hey presto, I was safe (well I wasn’t falling at any rate). It wasn’t until afterwards, in the sanctuary of the local pub that Coryn told me he was actually shouting "Don’t fall for a minute, you’re not on belay". Great.

We hit the base of the final and most difficult pitch, up to this point it the climbing had been grade 4, this was now a grade 5. The weather looked like it was closing in. I prayed it would rain but didn’t. Instead dark clouds hovered ominously, the odd measure of thunder rumbled around inside them, but no rain. 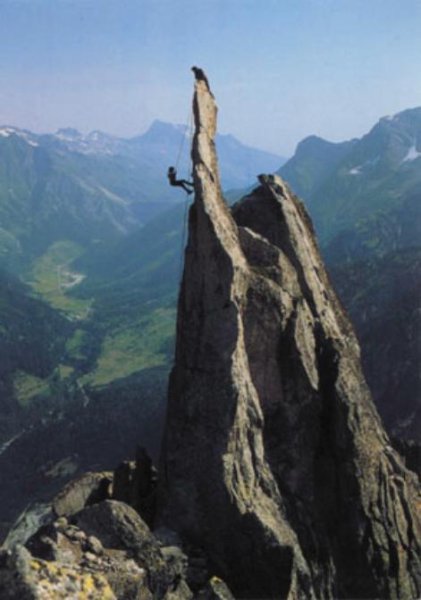 Coryn led, I watched him from the base of the climb. Towards the top he began to feel around looking for a hand-hold. I could tell from the way he rejected and then reconsidered the holds that there was nothing ideal at that point; it was a question of palming the rock and pushing up with your feet. It took him just ten minutes to get to up. He didn’t spend long on the summit, the odd low roll of thunder warned us not to delay.

Now it was my turn. My stomach was in knots. My breath was shaking. "I can do this", I thought trying to convince myself. Coryn coached me up describing the route as I ascended. I did okay until I received the instruction, "At this point there really isn’t anything to hold on to and there’s not much for your feet either. You just have to smear across and up to your left for a bit". The word ‘smear’ is enough to put fear in to the heart of any woman. At 2,500 meters ‘smearing’ just doesn’t sound like a very good idea. I looked at the smooth rock and contemplated the move. I looked down at Coryn; "It’s okay" he assured me, "I have you". "Yeah, I thought, on an 8.5mm half rope". I went for it, completed the move and found myself in an equally difficult dilemma.

"This is the final difficult move" he said. "That’s what he said about the last one" I thought. "You reach up and around with your right hand and palm the rock on your left and stand up on the ledge on your right." "Ledge on my right" I thought, "what ledge on my right" and then I saw that he meant the quarter-inch sloping blip in the rock face. It was a ‘ledge’ in about the same way a unicycle is a mode of transport but I could see the summit and the thought of straddling it and feeling secure was the incentive I needed. I made the move. I sat at the top, trying to believe I was actually there. I raised both fists in the air and took a deep breath. For the first time that day I dared look down. On one side I could see our camp site way way below, on the other side a massive dam and gorgeous big mountains all around. The view was stunning from my vantage point – on top.