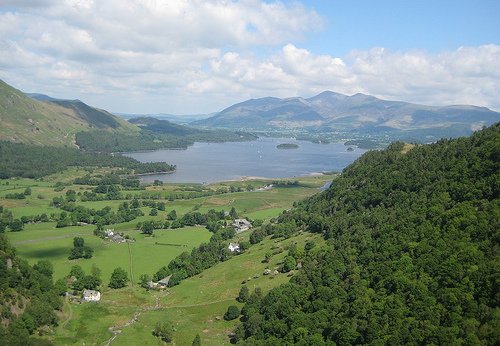 The above shot and the following one were taken from above the third pitch on Troutdale Pinnacle, on Black Crag in Borrowdale. 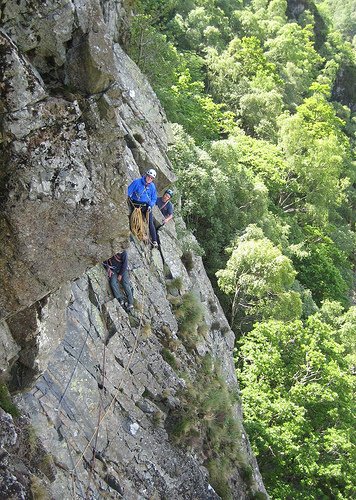 On the same day, after a leisurely lunch, we moved on to the nearby Shepherd’s Crag where Herbert and Liam shared leads on Little Chamonix, seen here with Herbert on the photogenic final pitch. 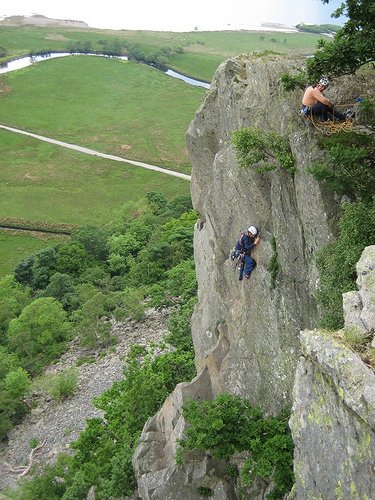 Given the summer weather, the emphasis, not surprisingly, was on climbing, with the mountain crags proving very popular. This was a very active bunch of climbers and the list of crags visited makes for impressive reading. Dow Crag, high above Coniston; Gimmer Crag, White Ghyll and Scout Crag in Langdale; Needle Ridge on Great Gable; Gillercomb Buttress; Buckstone How above Honister Pass; Black Crag, Shepherds Crag and Raven Crag in Borrowdale; Castle Rock of Triermain; Wallowbarrow, in the Duddon Valley and Trowbarrow Quarry were all climbed upon. 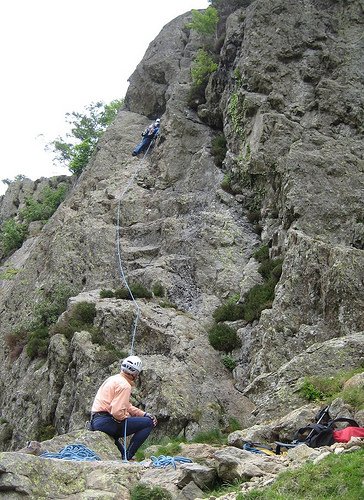 On Castle Crag, on a warm afternoon, Herbert got to clock up his first multi-pitch lead on Lake rock, an event that pleased him greatly. 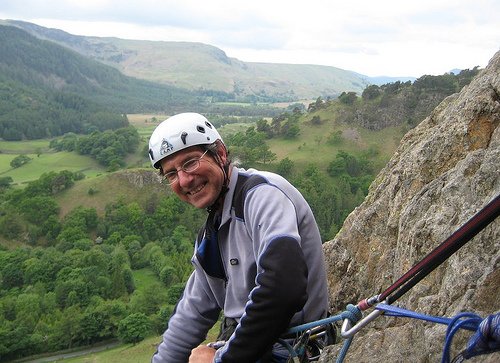 We had six from this year’s beginners’ course, and they decided to stick together as a group. They experienced a minor contretemps on Corvus, high up on Raven Crag, but extricated themselves successfully. These hiccups are all part and parcel of the climbing scene, particularly when on multi-pitch routes and, in coping with them, there is more to be learnt than might be picked up on half-a-dozen courses. Their enthusiasm unabated, they also climbed on Scout Crag in Langdale and Brown Crag in Borrowdale.

In the evenings the kitchen resembled the set of one of those celebrity chef shows, with all kinds of exotic dishes being prepared. Our little crew preferred to support the local economy by eating out, however, and on one of these occasions we were fortunate enough to arrive at the tail-end of a local event, a Cumbrian Wrestling contest. The winner, a large, bare-chested, barrel-chested and much tattooed individual, was ensconced behind a table in a little alcove in the bar, sinking pints for fashion. It was only when the bus arrived to transport him and his supporters away that we realised that he wasn’t only bare-chested, he was buck naked, and it seemed that part of the ritual was to slap him on his bare buttocks as he lumbered out to the car-park (needless to say, we were much too shy and refined to participate in this age-old, touchy-feely custom). Indeed, the event was enough to stifle any thought we may have had of sampling another local speciality, the renowned and redoubtable Cumberland Sausage. 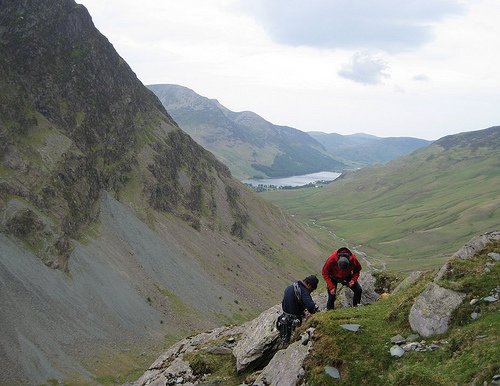 On Buckstone How, on one of the duller days, there were three parties in action. Set above the Honister Pass, with distant views of Buttermere, the rock is a type of blue slate, which makes for a change from the usual Borrowdale Volcanic, found on many of the crags. 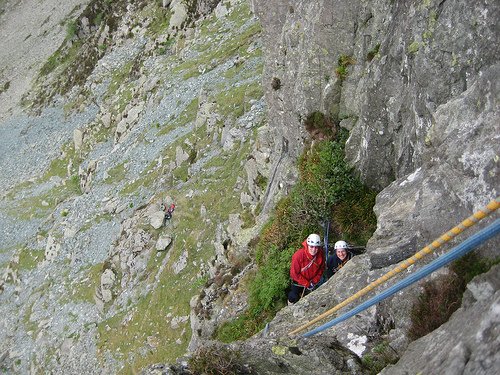 While we were on the six-pitch Honister Wall, Terry was climbing next door to us, on the popular Sinister Grooves. 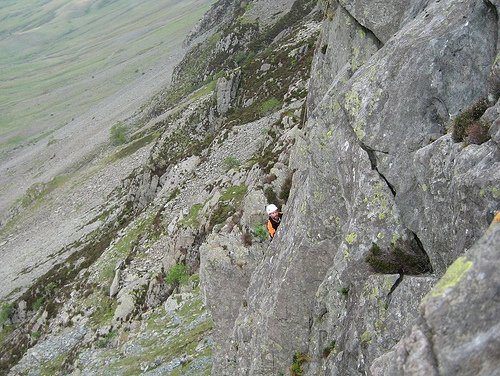 By the time Cearbhall and Stephen were on the last pitch of Honister Wall some drizzle had moved in, but they coped admirably.

All the gear shops in Keswick (and there are quite a few) were visited, various pieces of equipment tried and tested, prices haggled over, discounts achieved and several significant purchases made. On the morning of our departure a heavy dew showed reluctance to take its leave. Several parties opted for an early dash down to Wales, to bag some routes before boarding the boat, but those of us who kept faith with Cumbria were rewarded with a gradual clearance, followed by a beautiful day. 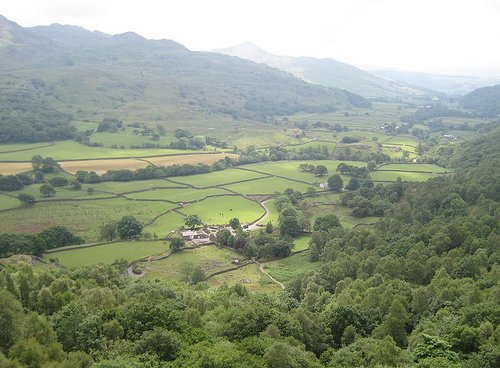 Liam and myself headed for the beautiful Duddon Valley, to visit Wallowbarrow, a crag reached via a pleasant, meandering path through lovely oak-woods, where we had the rock all to ourselves. 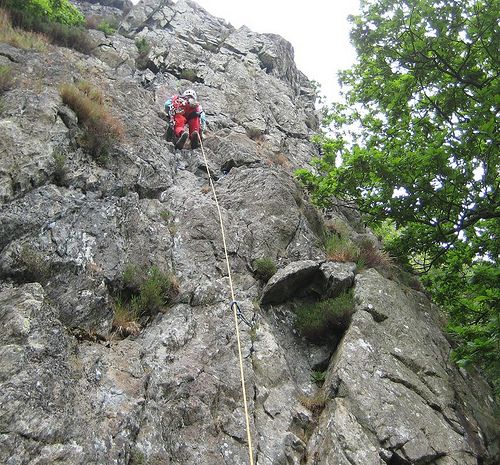 We did a route each, seven pitches in all, and finished as we had started five days earlier, with blue skies and sunshine. 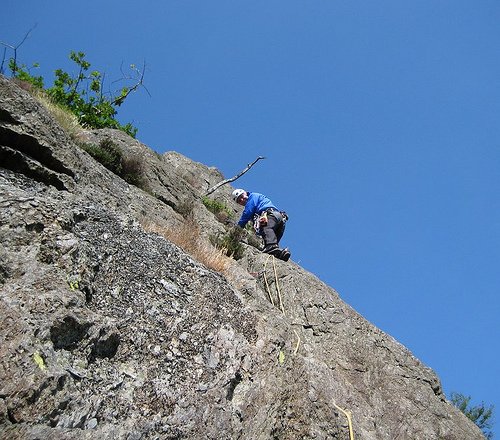 Moving the Lakes Meet to the June Bank Holiday weekend this year was something of an experiment, done on a trial basis. The general consensus seemed to be that it was a worthwhile move, and one worth repeating next year. Of course, such fine weather cannot be guaranteed every time but, with the long hours of daylight, the chance of some dry weather each day should be reasonably good.

Many thanks to all the members who supported the meet.