(by Elaine Mullen, from IMC Newsletter Summer 2004)
“The police are in the tunnels; they’re turning people back”. “OK, that’s it. Let’s go!”. And so we headed off to start the Camino del Rey by crossing the infamous ‘gap’. 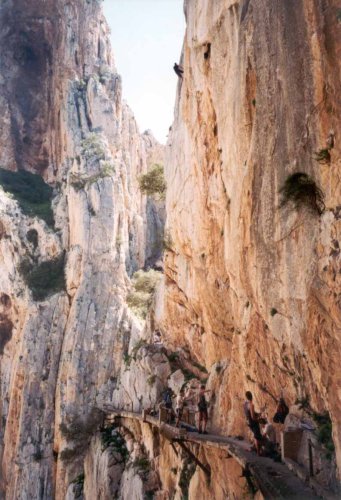 The Camino del Rey is a high-level walkway that threads the length of the narrow gorge, or Garganta del Chorro, hanging precipitously halfway up its side. It was built in the 1920s to allow the King to view the engineering works (irrigation channels and hydroelectric schemes) being carried out. In its hey-day it was one of the wonders of Spain and a popular tourist route. These days El Chorro is a very popular climbing area but large sections of the Camino, which can be used to access some of the climbing, are in a poor state of repair, unstable, very narrow and many have fallen away entirely. A railway line now tunnels its way through the opposite side of the gorge, allowing the climbing to be reached by walking through about 2km of tunnels and crossing a ‘camino’ bridge (solid but without side railings) at the far end instead.

The ‘gap’ is where the first 25m or so of the walkway has fallen down, or, as is more likely, been pulled down to keep people off; this has to be crossed to get on to the route. The Rockfax guide notes, rather dauntingly, that the ‘gap is pretty frightening the first time you cross it, but it is easy to get used to it after a few trips’. The Camino starts on the tunnel’s side of the gorge and quickly crosses over a big water pipe bridge to the other side. 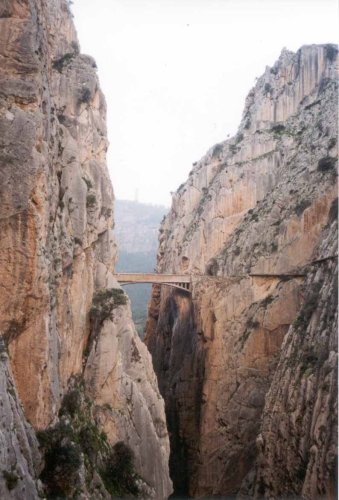 The bridge in the gorge

Looking down at this the previous day it looked quite scary, but when Ian McHardy and I arrived next day to do the camino, we saw two climbers seemingly waltz across it in runners, not roped up, and carrying plastic bags in their hands. It was obviously much easier than it looked and, with the police about, going through the tunnels was now no longer an option. So, we took off down the steep slope to just under the remaining steel rungs of the old path. Then we saw them, the magic holds: bloody great handles stapled into the rock, only they were rock-coloured handles so you couldn’t see them from above. To cross the gap you just had to move from handle to handle and step from rung to rung. I say ‘just’, but the rungs were about one metre apart, the ground falling away steeply below and the handles clearly placed by a climber with ape-like proportions. I found it nerve-racking being spread-eagled between these things but I just kept following Ian who was motoring on ahead. At this stage, being a Sunday, a large crowd had gathered above us (freshly evacuated from the tunnels) and cars had pulled in on the opposite side of the lake at the mouth of the gorge below. Knowing we would feature in countless holiday videos and photographs the pressure was on to keep going and look as if we were enjoying it!

Once off those rungs it was easy: just a short climbing pitch with loads more handles to haul up on. Up on the walkway ‘proper’ we felt quite safe, even though we were now standing on an old, decrepit, concrete walkway, less than a metre wide, above a 50m drop, with no side rails – it’s all relative! Round the corner was another missing, ‘atmospheric’ bit, but all along the route where sections like this have fallen away, climbers have fixed wire along the rock as protection to clip into, or hold on to. We looped slings through our harnesses, put carabiners on the end, via-ferrata style, clipped in and shuffled across the remaining steel support rung, hands on the wall, trying not to look down. The wire was quite thin and looked only to be knotted through a bolt at either end, but after surviving the ‘gap’ I was feeling immortal! 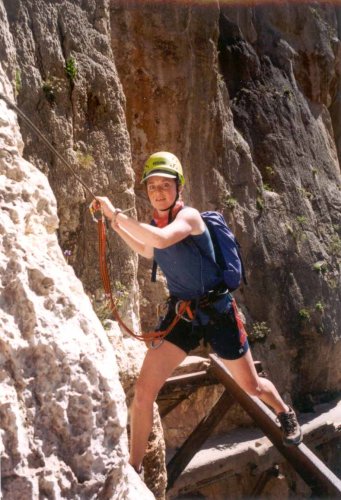 Once over the big waterpipe bridge the views up the gorge were stunning. Millennia of water pressure has left decorative hollows, caves and fissures in the 200m high limestone walls. Eagles circle on high and the water swirls below. We passed climbers in this lower gorge section, clearly very used to their precarious position. According to the Rockfax, here there is ‘little in the way of easy climbing and an air of seriousness prevails’.

Between the lower and upper gorges the walkway goes back on land and the gorge opens out into a lush, verdant wooded area with the river running through it. Another ‘atmospheric’ section greeted our entrance into the upper gorge. Once over this though, the path was in much better condition here than in the lower gorge. Fortified by some lunch, Ian lead a couple of climbs here (5 & 5+) above a solid section of camino – there was rock rather than air underneath! The rock was very grippy and the bolts well spaced, a treat after the polished, smeary, grip-free horrors on the easy-access tunnels side of the gorge.

The upper gorge area was fascinating. More of the original hand railings and overhead curved supports remained. The path was closer to the water, which at times was a raging torrent, the gorge was narrower, and there was no intrusion from trains (the tunnel running deep inside the rock opposite). Over the years, climbers have devised means of crossing the gorge at its narrowest parts and bolted their way up the other side. Rows of ‘handles’ crossed the walls low down and half way up giving access to these climbs – these access traverses themselves looked like they warranted climbing grades because of their exposure! The walls on the Camino side of the gorge were busy that day with climbers who’d obviously got into the tunnels before (or after?) the police. There were a few 5 and 5+’s we could have done and the Camino was quite solid, but we were tired; all that adrenaline …!

There is no way out at the top of the gorge. The authorities have been more successful in their endeavours here than at the other end of the gorge: a large ‘gap’ is fortified by barbed wire and a large metal gate with spiked sides. So, we returned to the car via the ‘camino’ bridge and tunnels, back for a swim in the pool in Finca del Campa where we were staying. We’d highly recommend it: the camino, the swim afterwards and the accommodation! 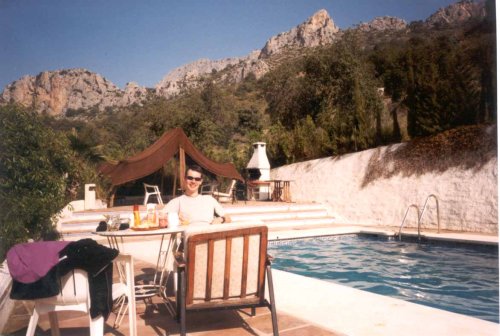 Ian
Designed By HowlThemes
Back To Top