(by Gerry Moss, from IMC Newsletter Winter 2002)
A climbing guide to the little Co. Wicklow crag

The current edition of the Wicklow guidebook was published in 1993, almost ten years ago. Since then there has been only a trickle of new routes in the Wicklow area – attention has moved on to other, less developed, areas. For this reason it is unlikely that we will see a new edition of the guidebook for some years to come. Carrick crag was developed by the Club too late to be included in the 1993 edition and, although details were published in our own Newsletter, all this happened some years ago and members who have joined the Club in recent years would be unaware of its existence. Under the circumstances we thought it might be opportune to highlight the crag again.

GR T236940. This little crag, lying on the eastern slopes of Carrick mountain, was previously hidden by the trees growing around its foot. Recent clearing of the forest has revealed all, allowing it to receive the full benefit of its Southerly aspect. Being at a relatively low altitude and in the same beneficial weather zone as Barnbawn, it can offer a day’s climbing when Glendaloch and Luggala are too wet or too cold for consideration. It does, however, suffer from seepage, and takes some time to dry after heavy rain, so bear this in mind. For a small crag it offers a wide range of climbing: routes so far include gentle slabs, a classic chimney, steep, delicate face-climbing, and a strenuous overhanging crack. There are still some natural lines awaiting a first ascent. 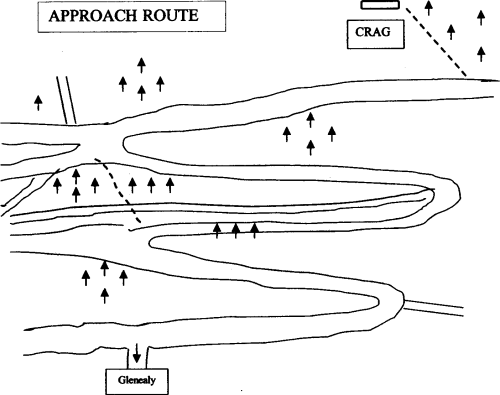 Head south from Dublin on the N11 (the main Dublin/Wexford road) as far as the village of Ashford. Just before leaving the village, and immediately after passing the Texaco filling station, take the road slanting up right, which leads, after about 7km, to the village of Glenealy. Just before you cross the bridge to enter this village a narrow road leads off right, by the side of the community hall. Follow this to where it ends, after one kilometre, at a forest entrance (this road is quite narrow and parking is very restricted, but there is a good car park in the village, opposite the pub).

Cross the barrier, keep right and follow the forest road as it curves up and back left to another junction. Turn right here and, after a short distance, take the narrow pony-track striking up left. Follow this pleasantly as it heads uphill through deciduous trees, crossing another forest road en route, to emerge at a wide, complex junction of roads and tracks (less than 30 minutes). Take the road slanting up right and the crag comes into view, up on the left, after about five minutes. Since the trees were felled the undergrowth on the hillside has flourished, so the best approach to the crag is to continue on the road beyond the crag to the edge of the trees and slant back left, about forty-five minutes in all.

All the climbs are single-pitch, varying from 8 to 18 metres in length, and the routes are described from left to right. The descent route is at the extreme left of the crag.

1  Warming-up  VD
G.Moss 2/6/92
Start at the left-hand end of the left-facing wall. Climb a short ramp and move left to finish.

2  Running Before the Wind  HS
G.Moss, B.Hannon 23/11/92
Start halfway along the left-hand wall at the foot of a shallow groove that runs up to a small tree on a ledge. Climb the groove on small holds to the ledge. Finish up the short wall above the tree. The difficulties are short but unprotected.

Moving around to the right, there is an unclimbed crack and groove above a spike at the left-hand edge of the overhanging face. The crack splitting the roof at its widest point has yet to be done.

3  NRG  E2(5b/5c)
T. O’Neill, G. Moss 5/10/96
Start at the bottom left of the wide obvious chimney, beneath a small overhang, which is split by two cracks. Climb a shallow groove and the crack through the overhang. A strenuous but well-protected test-piece.

4  Sorchas  HS(4b)
G.Moss, B.Norton 19/9/92
Start at the bottom of the chimney. Bridge up between the right-hand edge of the chimney and the left wall, keeping outside the chockstone. Overcoming the narrows provides an airy crux.

5  Dorchas  D
G.Moss 2/6/92
Start as for Sorchas. Move up the floor of the chimney to a step halfway along. Bridge up to finish behind the chockstone.

The shallow corner behind the ash tree about two metres right of the chimney has been tried, but is still unclimbed.

6  Carrick Crack  VS(4c)
B.Norton, G.Moss 19/9/92
Start at the right-hand edge of the face, just left of a grassy gully, below a crack. Make a difficult move to gain a sloping ledge. Climb the crack, which gives strenuous, but well-protected climbing.

7  Carrick On Climbing  VD
B.Norton, G.Moss 19/9/92
Start just right of the narrow grassy gully, at the foot of a short, right-trending ramp. Climb the ramp and finish up the centre of the slab on small holds.

8  Garvaghy Road  VS(4c)
G.Moss, T.O’Neill 13/7/96
Start around to the right from Carrick On Climbing, behind the holly tree, below a narrow jammed flake at 2m. Climb to a ledge and gain the top of the flake. Difficult moves off the flake provide the crux.

9  Queen’s Highway  E1(5b)
T. O’Neill, G. Moss 13/7/96
Start 2m right of Garvaghy Road below the left edge of the 20m slab. Climb a bulge to the foot of the slab and follow an incipient crack line 1m in from a grass-filled crack. Thin moves, poorly protected, lead to a good finish.