(by Allister Gerrard, from IMC Newsletter Spring 2012)
An ascent of a classic mountain route, a regular feature of the annual IMC springtime meet in Connemara.

The Irish Mountaineering Club meet in Connemara is strongly associated with the late Hugh Sharkey who had organised the meet over many years. Hugh’s walking prowess was legendary. He once completed the gruelling “Maamturks Challenge Walk” back to back – yes, he went from start to finish and back again in one day. This annual meet is always well organised and popular with IMC folk. Carrot Ridge usually draws a few interested members, weather permitting. It was named Carrot Ridge by Joss Lynam and Liam Ó Réagain who believed they were completing the first ascent in 1949; however they later learned that some Cambridge students had previously climbed it in 1933. 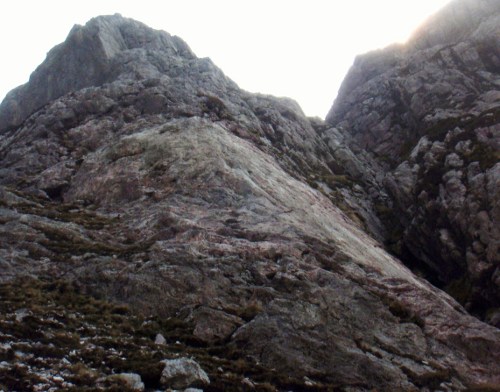 Once in Connemara take the turn off the N59 for the R344; from the north coming from Letterfrack / Kylemore Lough / Leenaun or from the south coming from Maam Cross / Recess.

Parking is available on the main road at a lay-by just past the bridge over Tooreenacoona river (GR 824 555).

There is walking access via a private road south-west that leads into the Gleninagh Valley (Gleann Eidhneach) and River at GR 820 562. You would be advised to seek permission from the local farmer before proceeding too far down the private road, especially if travelling in a large group through this quiet area. We did not have a problem and managed to slip by unnoticed.

See Ordnance Survey sheet No. 37 or Harvey’s Connemara Super Walker maps (the latter actually has Carrot Ridge marked) at GR 816 532. It is a pinkish slab to the left of the main cliffs.

Carrot Ridge lies just north of Bencorr and southwest of Bencorrbeg (577m) and more precisely just north below Binn an tSaighdiúra (the 653m spot height shown on the 1:50,000 map); here is where one will find Carrot Ridge, in the Twelve Pins.

Walking into the Gleninagh valley the hustle and bustle of busy life slips away as the beauty of this wide expansive area coupled with its remoteness and stillness takes hold of you almost immediately.

The Carrot Ridge climb is graded Difficult and is 275m long. Total height gain to the summit of Binn an tSaighdiúra is approximately 620m. When descending directly back the round trip is 11km. The time taken to climb the route will vary depending on the party and other factors and can be from as little as two hours to over four hours.

Aileen and I climbed the route in April 2009. The following day we went back early in the morning to meet Pádraic Gibbons who had bivied at the foot of the ridge from the night before. When we met him that morning for a cuppa, he had already climbed the ridge earlier that morning solo. After tea, all of us decided to climb it again.

The route of the ridge becomes clearer as you near it. To the left as you approach from the bottom (east) the ground slopes away, to the right (west) it drops off steeply into a gully with more craggy ground beside it. From the private road, we continued south-west until we chose a point to cross the Gleninagh River, with boggy ground underfoot. I would not recommend it to a hillwalker lacking climbing experience. We used a rope and climbing gear for most pitches. Those who solo it know their own capabilities and limits and can protect themselves at crucial times. The rock itself is quartzite, with white and pink colours and can be smooth and sharp in places, however it offers good grip when dry and a lot of it is broken up and the rock is rough. Although the route has been climbed in the wet, I would imagine it could get quite slippery, and I would recommend leaving it for a dry day.

Although there are many ways to climb this ridge, on both of our ascents we mostly kept to the same route, but for two pitches where we tried completely different lines. I would not take too much notice of the number of pitches as once you have started you will generally figure it out as you go along and it will be obvious where to belay, solo, use gear etc. 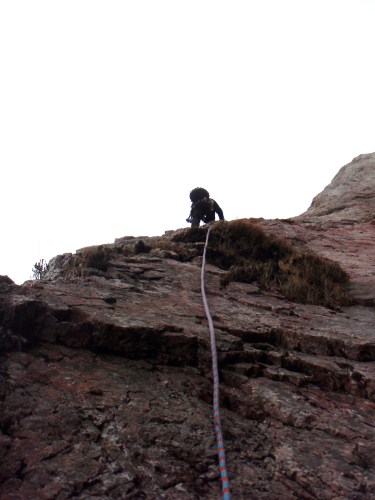 Pádraic on the first pitch

There are several ways to climb it. Both times I have started it differently and after the first few pitches it all links up as before.

Pitch 1: On my first time doing it, we climbed the slab near its left edge to a steepening (25m).

Second time round, we started the ridge way left and up a bit from the lowest point of the ridge and meandered our way up on thin holds and gear placements.

Pitch 2: Moving right, we continued straight up with small holds to easier ground. The easier ground leads to a wide stony ledge (55m). One can escape down to the left from here if necessary. This is the First Step.

Pitch 3: The next pitch starts steeply, taking you to the right but more reasonable holds and is short before reaching a stance.

Traverse left to a corner into a recess, steep for a few meters until pulling up onto a ledge of the ridge (45m). 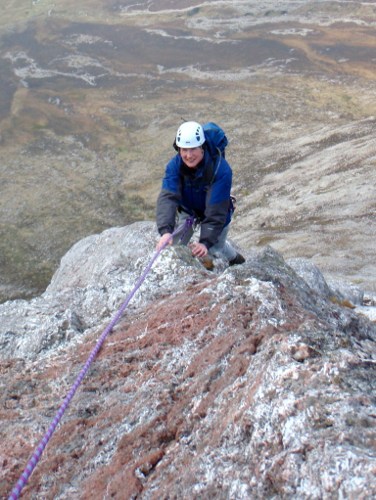 Aileen on the ridge

Pitch 4: Scramble over to the left towards a chimney/corner, an interesting few meters of climbing on good gear placements onto the best viewing platform on the ridge so far (15m).

Pitch 5: The ridge involves a nice bit of scrambling for approximately 90m with an opportunity to enjoy the views down to the valley and up to the summits around. A good feeling of being on a ridge now, as broad as it is in parts; it leads to an easy slab to the bottom of the Second Step.

Pitch 6: Start on the left side of the wall at one of its lower points. Then move right to reach a groove on the slab which leads up the second step just right of centre of the slab. Get what gear you can in when you can as you go, as opportunities lessen as you go up; it also gets more airy, no surprise there, as the holds get thin and more delicate as you inch towards the top of this tricky slab before reaching easier ground on top (36m). 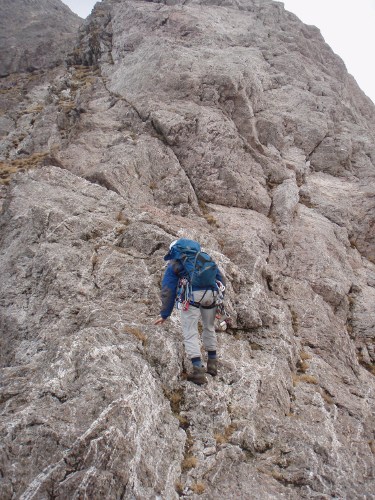 Aileen on the final scramble

Pitch 7: Reasonable scrambling leads up to the Third Step, with the final bit of scrambling to the top of the ridge (100m). From the top of the climb it is worth finishing by topping out on the summit of Binn an tSaighdiúra, the 653m peak. 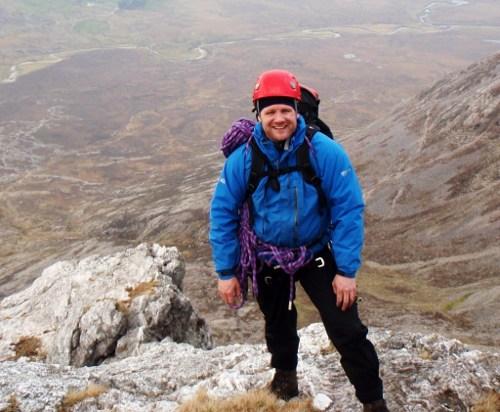 Allister at the top

From here, numerous options can be taken, depending on time.

I found climbing protection sparse in places. The odd friend, hex, nut and even wire were used; a little of each perhaps. We had a 60m rope and climbed the ridge in rock shoes the first time and the second time in boots. It is probably a more enjoyable outing in boots and would be of more benefit if looking to gain experience for climbing ridges abroad.

Carrot Ridge may only give a taste for what may follow; if you fancy more of the same but harder there are more routes next door to the west of it such as Seventh Heaven.

Relying upon Pádraic’s experience, a bivy at the base of the ridge can add to the feeling of remoteness and enhance the sense of occasion.