"I think that’s the Argentière glacier", somebody said as all four of us hung our heads out the window of the slowly-creeping mountain train en route to Chamonix. The following morning the weather was promising as we walked through the streets of this busy town at the foot of the Mont Blanc massif. 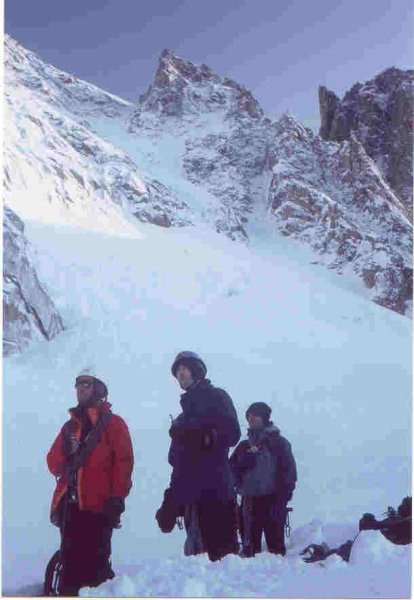 Enjoying lunch in the Whymper Couloir

Burning credit cards in our wallets having just spent a fortune on new climbing gear, I was now stuffing a pastry into my mouth and anything else I could lay my hands on as we passed by supermarkets and fruit stalls en route to catch the rack-railway to Montenvers our access to the famous Mer De Glace.

Just as we took our first steps out from the station the heavens opened. We wrapped up in our goretex gear and not deterred, got into a steady pace on the glacier heading up towards the Couvercle hut at 2700m, high up on the side of the Talefre glacier. A steep section of ladders and an energy-draining snow plod later the hut came into view, but wait, it was all locked up. We were too early in the season for the wardens. One hundred metres further on to the right perched underneath a giant overhanging slab was a small silver bivouac hut with two sets of skis upright in the snow at its entrance. This was to be our new home. By now it was beginning to snow heavily. As we settled in for the evening we got talking to the owners of the skis, two French climbers who had just completed an ascent of Aiguille Verte (4122m). Our plan was to try for La Nonne. At 3340m this is a classic rock ridge and a good introductory route to get started on.

The following morning 3.00am: "complete white-out lads" Frank said as he surveyed the scene from the little hut window into the night. Back to bed for a lie-on before our first full day spent in the hut with a deck of cards.

Later that afternoon more company began to arrive with news that the météo was forecast good for the following day. Sure enough 3am came again and this time it was battle stations. We were the last out of the hut at 4am as the other parties were going for Aiguille Verte, a longer route than ours. A crystal-clear morning greeted us as we plodded up the fresh tracks in the direction of our ridge. As visibility increased we realised the beauty of our surroundings as the Grandes Jorasses caught the first of the morning sun, towering above the Leschaux glacier; up ahead we noticed the forward parties slowing down. Soon our ridge came into view and it was time to make tracks for ourselves. As we got closer it became obvious that the amount of snow that had fallen the previous day had put our route out of condition.

We decided to attempt the ridge via our original planned decent route but after a gallant effort in sometimes chest-deep snow we gave up on that option also. Our consolation was to head up after the other parties towards the Whymper Couloir on Aiguille Verte. By 9am we approached the base of the couloir only to meet disappointed climbers returning having abandoned their efforts on this route also. At the base of the couloir at 3600m we had a quick brunch as Dermot recorded a –18 degrees Celsius temperature. The magnificent situation we were in was our reward for our efforts as we began our descent to Montenvers with high hopes of better things to come.

A good meal and proper night’s rest in a real bed (along with a few pints) and our spirits were high again. It was time to catch the téléphérique up to the Aiguille du Midi at 3842m. This famous meteorological station with its fantastic observation decks and restaurants are a must for any visitor to the region. The cable car climbs over 2,800 vertical metres from a valley base of 1039m which itself is an incredible achievement for the engineers who constructed it. Spectacular views of Mont Blanc greeted us as we walked out onto the observation deck with both climbers and tourists enjoying the high altitude views. Time to get the gondola across the Vallée Blanche to the refuge Torino just over the Italian border.

That evening we had the hut to ourselves apart from the warden. Our plan was to go for the Rochefort Arête and hopefully have time for an ascent of the Dent du Géant at 4013m. A 3am wakeup call and down for breakfast of stale bread, jam and hot chocolate. Outside, visibility was moderate with cloud building up. Soon any stars that had been visible were covered over and we could hear rumbles of thunder in the distance. We continued on but soon flashes of lightning began to light up the sky becoming more frequent as time went by. After 2½ hours we were approaching the ridge which would lead us up to the Rochefort Arête. At this stage the lightning was too close for comfort as flashes appeared all around us. I was getting nervous as I held a metal ice axe in my hand. What to do?

"Shit…what was that? I’m hit" Denis had just taken a photo of me with the flash on at point blank range and scared the life out of me. I began to see the funny side but it was time to get the hell out of there. There was now a complete white-out with zero visibility so with some careful navigation we were back in the security of the Torino Hut by 7.30am. We spent the rest of the day recovering for a second attempt.

The next morning the weather was more promising. Even the moon could be seen. With a sense of déjà-vu we reached our previous night’s position and advanced to gain our first touch of rock. It was time to rope up as we began making our way up the ridge. What had looked like small gendarmes from below now turned into huge rock towers as we picked our way through the mixed ground. It was now fully bright as the surrounding mountains appeared in all their splendour. As we pitched most of this section it made the going a little slow and in hindsight we probably should have moved together alpine style. Eventually we reached the start of the Rochefort Arête. It was like a knife edge, with barely enough space to stand with two feet together. A magnificent ridge but right then it was heaped with fresh snow. We went along for 100m or so but realised it was completely out of condition; huge corniced sections lay further along the ridge, which made it too dangerous to do the traverse. We decided we’d put all our efforts into Dent du Géant.

A quick bite to eat, swig of water and Frank launched into the first pitch which brought us around an exposed corner to a fine steep rock couloir. The rock was fantastic with plenty of protection to be found, both natural and fixed (pitons etc.). This couloir led us up to the exposed Burgener slabs, which we climbed with the aid of the massive fixed ropes, which felt like elephants’ trunks in my hands.

Being a purist I felt I was cheating using the ropes to haul myself up, but time would not allow for a free ascent and so I quickly put any notions to the back of my mind. After seven pitches we reached the S.W. summit (4013m) at about 12.00 noon. A fantastic rock pinnacle with room for only two at any one time. After a few photographs and a hand shake it was time to turn back. As we had climbed as two individual pairs we now joined our fifty-metre ropes together for the start of what seemed an endless succession of abseils. Because four of us had to complete each abseil it was some time before we were back to the base of the Dent du Géant and making our way down the ridge. A few more abseils and a little detour off route, which cost us an extra hour. It was hard to pick a line with so much snow. We back-climbed in sections but with the snow now like sugar in the afternoon sun, our progress was slow. By the time the sun was setting we were still on the ridge.

The last few sections were completed using our head torches. It was 11.45pm before we reached the Torino Hut. It had taken over 20 hours to complete the route. The only explanation for taking this long was it was in winter condition during summer. Would you swallow that?

That was to be our last day of climbing as the following day a storm came in that would last for the weekend. This put the cable cars back to Chamonix out of service and it was too bad to cross the Vallée Blanche by foot. Our only option then was to drop down to Courmayeur in Italy and hire a taxi to take us through Italy, Switzerland and back into France – over 200km and costing £160 all to travel 8km as the crow flies. The Mont Blanc tunnel would have been ideal, but it was still closed for repair due to the tragic fire last year.

Chamonix certainly has the cream of alpine routes but its weather systems curtailed our adventures onto them. Also early June is probably too early in the season to travel to the Alps but we’ll put that down to experience. 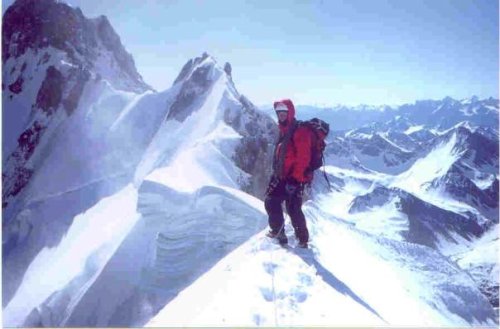 Rochefort Ridge – Frank Power
Designed By HowlThemes
Back To Top