(by Grania Willis, from IMC Newsletter Winter 2004)
Grania Willis, who became the first Irishwoman to summit the sixth highest mountain in the world at the end of September 2004, reflects on her climb of Cho Oyu in the golden jubilee year of the 8,201 metre peak’s first ascent in 1954. 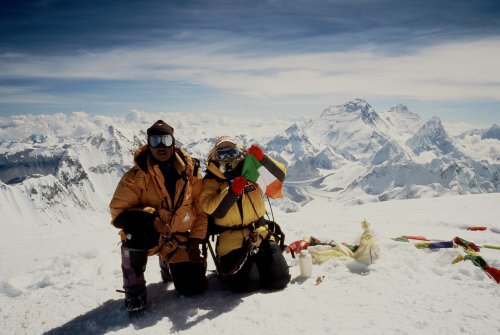 As a recent recruit to the mountaineering world my big hill ambitions have shocked quite a few more seasoned campaigners but, with Everest already in my 2005 diary, I knew that my chances of success next spring would be considerably enhanced if I could get an 8,000 metre peak under my belt beforehand.

After some Alpine climbing with Robbie Fenlon in June, the opportunity to travel to Tibet with New Zealander Russell Brice’s Himalayan Experience team presented itself to me and I welcomed it with open arms. My mountaineering experience is not sufficiently extensive to consider taking on an 8,000er without commercial back-up and Brice was offering what seemed like the perfect package.

A team of 10 clients would be accompanied by three Kiwi guides, as well as Brice, plus seven climbing Sherpas. The guides and Sherpas had an impressive CV between them, boasting 30 Everest summits and 30 successful Cho Oyu ascents. Brice himself has climbed Everest twice, including an ascent of the infamous Pinnacles. He also held a long-standing record speed ascent of Cho Oyu but his time of 11 hours was beaten twice while we were on the mountain.

The expedition members gathered in Kathmandu towards the end of August, leaving the Nepalese capital on the 26th to fly to Lhasa and then embark on the overland trip to Chinese Base Camp (4,800m). I was still in Athens covering the Olympics for The Irish Times but my arrival in Nepal was delayed still further when riots broke out in Kathmandu following the murder of 12 Nepalis by the Iraqis.

My September 1st flight was cancelled and even when I eventually arrived on the 5th, the capital was still under curfew – a very eerie experience for anyone familiar with the usually crazy hustle bustle of Kathmandu life. By now I was 10 days behind the rest of the expedition and playing catch-up at altitude is far from ideal.

My itinerary involved an overland journey from Kathmandu to Kodhari, across Friendship Bridge into Tibet and then on to Tingri. Three days at Base Camp were pretty dispiriting as the rest of the team was well ensconced at ABC (5,800m) and had already done a carry to Camp I (6,400m). They were well ahead in their acclimatisation schedule and I couldn’t wait to catch up with them.

I finally trekked the long haul up to ABC on the inauspicious date of September 11, but all thoughts of bad omens were cast aside when I met up with the people who were to be my close-quarter companions for the next four weeks. Russell Brice was the only one of the group I’d met before, and that was only for an hour, but I felt instantly at home.

After a pretty rapid ascent so far I was expecting some altitude related problems, but nothing manifested itself much to my relief. But Lydia Bradey, one of the Kiwi guides who had done an oxygenless solo ascent of Everest in 1987, had been suffering from quite severe headaches. It wasn’t until several days later when we climbed the Ice Cliff above Camp I that, much to Lydia’s delight, I confessed that my head was mildly sore. “So you are human after all!”, she crowed.

Aware that dehydration was probably the chief culprit, I increased my fluid intake. This task was considerably easier back in the comforts of ABC rather than having to undertake the endless chore of melting snow. And whose law is it that states that you never knock over the pot when it’s full of snow, only when it’s melted?

Water is at a premium everywhere on the mountain, even at ABC, with the cook boys constantly on water-carrying duty to provide the 450 litres that was used at camp every day. An incredible 150 litres of that was used solely for filling the flasks that were available round the clock for our consumption. 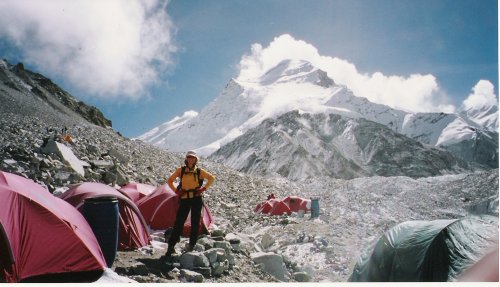 My first trip up to Camp I came after an initial carry to Lake Camp at the bottom of the dreaded scree slope. The rest of the team had already tackled the scree and their stories of one step up, five slithers down, didn’t encourage me. And yes, it was just as bad as they had described, but it must have been far worse for Mark Inglis, another Kiwi, who was climbing on prosthetic limbs after losing both legs from the knee down to frostbite.

Inglis had spent two weeks stranded in storms high up on Mount Cook 22 years ago but, after winning a cycling silver in the 2000 Paralympics in Sydney, returned to summit the New Zealand peak and now has his sights set on Everest next spring.

But first we had the Cho Oyu Ice Cliff to tackle. This 50-metre vertical wall of ice is one of only two technical challenges on the mountain, the other being the Rock Band, just above Camp III, which has to be faced only on summit day.

After two nights at Camp I everyone headed back down to ABC to prepare for the final summit push; everyone that is except Inglis, who opted to stay at Camp I rather than face two unnecessary trips up and down the scree slope. He’d already had to do some emergency repair work on one of his legs, which had snapped on the descent from the Ice Cliff. Rumours at ABC that one of the Himex climbers had broken his leg were greeted by us with much amusement, especially when we heard that Russell had informed the gossips that he’d done running repairs with a spanner.

Our planned summit date of September 25 was put back 24 hours when the weather forecast that Himex pays dearly for promised high winds up on the mountain. Several teams climbing without the benefit of such high-tech forecasting were forced off the hill while we whiled away the extra day in the warmth of our ABC mess tent, eating and playing cards, both on an almost non-stop basis.

Fresh snowfall on our original departure date gave us the chance to let off steam with a monster snowball fight but the westerners weren’t a patch on the Sherpas. Even the Australian team Sherpas joined in but the fight was brought to a halt when a stray snowball whizzed into Russell’s tent, endangering the entire comms system.

The stir-crazy symptoms were relieved the following morning when we finally got the go-ahead to start for Camp I. An overnight there and then it was on up the Ice Cliff and the draining and sometimes very steep trudge to Camp II at 7,000 metres, a new altitude record for me. Our wait for the weather window was well rewarded however, by cloudless blue skies and near perfect snow conditions with a good trail already established on the route to the summit.

There was a height gain of only 400 metres to Camp III, but arrival times at high camp were well strung out as members of the group coped differently with the altitude. Sleeping on oxygen was an option and one that several of us, including me, embraced enthusiastically.

A 1.30 a.m. wake-up was agreed but I was sleeping so soundly on my O2 and with heavy duty earplugs in that I didn’t stir until after two o’clock. With a tent-mate who was always last to leave, it was no surprise that we brought up the rear of the team at something after 3.30 with the headlights of other climbers blending in amongst the stars further up the mountain.

The Rock Band was our first real challenge and, surprisingly, I wasn’t fazed at having to climb without being able to see my foot placements on this sheer rock and ice face. But I certainly was fazed when, a couple of hours after sunrise, my energy levels plummeted. Left with virtually no water after a fellow climber spilt almost the entire contents of my water bottle I was struggling.

The steep parts, most of which are roped, were no problem but the endless summit ridge was draining and dispiriting, especially as most of my team mates were by now well ahead of me. But finally I could see the prayer flags that mark the summit and there was Everest, with its cohorts Lhotse and Pumori on guard to the right.

It was an emotional and wonderful moment, made all the more special by being on the summit with Lydia Bradey, a legend in the mountaineering world. Twenty-four hours later, a legend in the making reached the top. Mark Inglis, who had to abandon his summit attempt early on September 26, became the first double amputee to summit Cho Oyu when he topped out the following day, his 45th birthday.

Inglis will be part of the Himex team tackling the north face of Everest next spring, when I will be using the expedition to raise funds for Cancer Research and the Hospice Foundation. Donations or fundraising suggestions will be welcomed on 087-2998411 or to gwillis@irish-times.ie 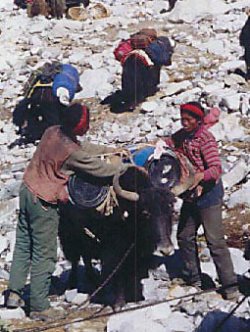 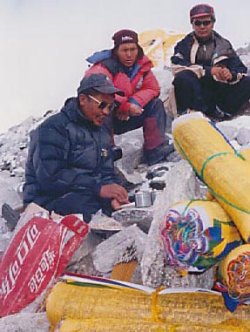