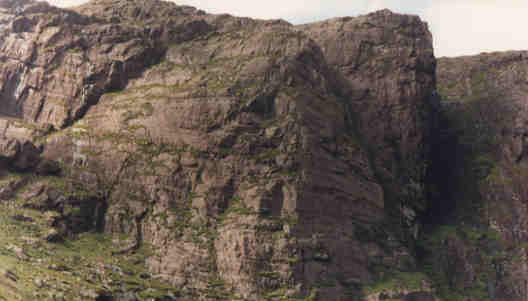 I’m showing this picture of cliffs on the west wall of Coomahorna (Coom of the Barley) to encourage some serious climbers to take a look at them. The coom is in the Mullaghanattin Range and is north of the highest point on the road from Sneem to Caherdaniel. It is on the eastern side of Coomcallee Mountain, with grid reference about V 634 678. Above it and to the west, is a hanging coom with a lake – Coomcallee itself. The sunlit section of the cliff on the left is south-facing and its upper portion is at a relatively easy angle, so that the shadowed corner on the left provides a descent route. Between it and the steeper face on the right are a couple of ill-defined grooves which join higher up. The leftermost of these starts as a curving, vegetated groove. The line continues to a dark, triangular corner from which escape can be made to the left onto the higher rocks. This was climbed by me and my late son, Dian, in 1988 as Moor-grass Groove. It was my last use of a hawser-laid rope. It is about V. Diff. and much of it is vegetated.

The east-facing face to the right is steeper and would be a formidable challenge. The Old Red Sandstone is in massively thick beds with little signs of stratification within these, so that it presents little in the way of holds and no signs of protection. But the cliff deserves to be looked at by a serious party. It is about 100 m high. Further right is a vertical to overhanging nose. I cannot see how it could be climbed without bolts and étriers, but perhaps there is someone good enough to tackle it. Further right again, with its start just hinted at the edge of the picture, there is an enormous overhang from which many house-sized blocks have fallen to the scree below.

Altogether, this coom is an interesting place.