(by Denzil Jones, from IMC Newsletter Autumn 2004)
15 days on the "toughest of all of the Grande Randonnée routes. … Nothing can equal this route in intensity as it crosses the most majestic sites at the heart of this most versatile and highly coloured island”.

The GR20 runs for 170 kilometres over the mountainous spine of the “Scented Isle”. One guidebook says that “it has the reputation of being the toughest of all of the Grande Randonnée routes, crossing extensive slabs of bare rock and involving some quite exposed scrambling. In a few places there are fixed cables, chains and even a steel vertical ladder to assist hikers, taking them into the sort of terrain usually reserved for rock climbers. Nothing can equal this route in intensity as it crosses the most majestic sites at the heart of this most versatile and highly coloured island”. It sounded interesting.

The route is spread over 15 daily stages, accommodation being provided by way of refuges. Not all of the refuges had “gardiens” in attendance, although all were open and had gas. Supplies are few and far between, particularly in the northern half of the route, necessitating carrying enough food for up to four days. You also have to carry a tent and a stove etc in case a refuge is full. Our sacks weighed in at 18 kilos each at Dublin Airport. With a minimum of two litres of water on board, we were carrying 20 kilos each. 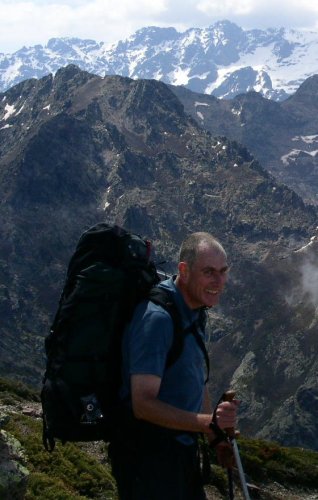 Day 1 got off to a bad start as my companion Charlie didn’t feel at all well. A delayed start gave us an opportunity to talk at length with a Belgian pair who had just completed the route in the opposite direction. They gave us a “heads up” on what to expect and were encouraging. A later start than planned, but once we got going we were fine. Uphill all day to the first refuge at 1,570 metres. It took us 7.5 hours to walk 12 km. This was an introduction of what was to come. To add to our suffering, about a quarter hour from the refuge the heel started to come off Charlie’s boot (a very old pair of Meindl). He tied it up with a spare lace.

One guidebook describes Stage 2 as “having its finger on the pulse of the GR20, leg-breaking but grandiose this stage is physically demanding with scree, narrow ridges, exposed scrambles, steep climbs and tricky descents”. It was all of that. Reaching a col at 2,020m we viewed the snow-covered range of mountains that was to be our home for the next few days. At the refuge that night the gardien produced a tube of glue and Charlie’s boot was good for another day or two.

The next day saw us scrambling over rock slabs and ascending a snow slope before having to descend steeply again.

Stage 4 is the one the highlights. Described in one guidebook as being “of Dantean proportions, it will go down in the annals as the memorable feat of the courageously intrepid hiker”. I took solace from another guidebook which said that it was no worse than what we had come across so far, just more of it and advised to take care but to at least have a look. However, it did say that a traverse of the Cirque de la Solitude should not be attempted if there is snow and ice present or if it was wet. Snow was inevitable but we had decided to at least go and have that look. There was snow but it was definitely “on”, so we descended into the Cirque and, of course, it started to rain but we were down before it made the conditions too bad. On the ascent back up out of the Cirque the fixed chains and steel ladder were buried in snow and couldn’t be seen, never mind being of any assistance. We got by with kicking steps into the snow and trudging up slowly. A good day out and not half as bad as I was anticipating, but then we couldn’t see the exposure for the cloud. 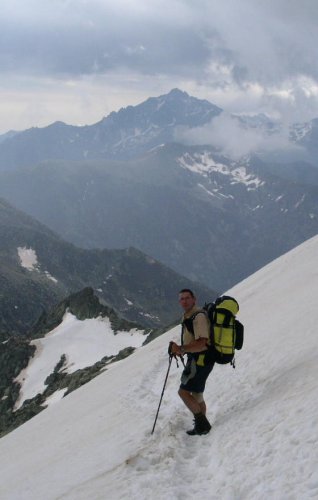 Stages 5 and 6 were somewhat easier, although long. The refuge at the end of Stage 6 had settled down for the night when a group of teenagers arrived late in a bit of a state, being ill-prepared and poorly equipped. The refuge was full so most of them had to sleep on the kitchen floor, with some bivvying outside. You couldn’t help feeling sorry for them. Charlie’s boot was glued together again but it was obvious that it wasn’t going to last another 9 days.

Day 7 was a day of mixed fortunes for us. We started out in sunshine and soon were ascending snow slopes. We crossed a ridge at 2,225m and were rewarded with a fabulous view of mountains and lakes and snow-covered ridges etc. A great day out and the highlight of the trip, until we heard thunder below us. We were off the ridge and away from any lightning, but descending snow slopes in cloud and heavy rain with thunder crashing about makes you think that maybe a sun holiday wouldn’t have been such a bad idea after all. The pits of the whole trip was when we reached the refuge. It was small and very crowded with everyone trying to dry gear without success. We were out of supplies and decided that we would rise early and walk the next two stages in the one day. This would put us a day ahead of schedule. We could use this “spare” day to get the train from Vizzavona to Corte, where Charlie could buy new boots, and still be on schedule.

Up at 5am and on the hill early. We completed the two stages in 11 hours on the strength of a Twix bar each.

Corte proved to be quite a change from the previous week. We enjoyed sitting down in a restaurant and having a long leisurely lunch. More importantly, new boots were bought.

The southern half of the GR20 is not as spectacular as the northern half, though it is still a tough walk. Not all of the stages are particularly difficult, but they are long. The first two stages are through beech forests. Nice enough walking but not mountaineering so we decided to kill them both off in the one day. The new boots were well and truly broken in that day.

Stage 12 saw us back up above the 2,000m mark. Another tough day, switching backwards and forwards over the same ridge for most of the day. The refuge was busy but we got sleeping space on the kitchen floor.

The next day saw us seeing off the end of that ridge before starting on a new range and ending with the customary long steep rock descent to a refuge.

Definitely downhill now as we were getting closer to the end of the GR20, but Stage 14 had a sting in the tail……a steep ascent in hot sunshine. We finished early in the afternoon, had something to eat and spent a while watching rock climbers at play at Col de Bavella.

Because of the heat we decided on yet another early start on our final day. Essentially a 1,600m descent, with a few short, sharp climbs thrown in. We reached journey’s end to a round of applause from fellow successful hikers and a well earned beer (or five).

The next day saw us bus it up to Bastia for a couple of days rest and recovery by the sea. I spent almost a whole day asleep.

Corsica is a beautiful island. Its mountains are majestic, its small sandy beaches unspoilt and its people very welcoming. I have fond memories of fabulous vistas, of hard rewarding days in the mountains, but also of birdsong, beautiful wild flowers and of the heady scent of the maquis on the lower slopes. The route is challenging but you are rewarded for your toils.

Perhaps best avoided in the busy season of June, July and August, because of the number of people on the route, the heat and the threat of thunderstorms, we felt that a late May start was ideal with the presence of snow a real bonus.