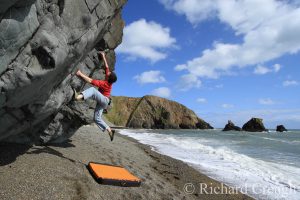 Richard Creagh began his climbing career in the climbing wall in UCC and since then climbing has taken him all over the world. Richard is also a talented landscape, adventure and wildlife photographer.

‘Having been interested in photography since I was a teenager it wasn’t surprising that I combined the two interests and while for the most part I just climbed, I sometimes put a bit more effort into making climbing images. It’s great to see my own photographs in the same magazine that inspired me when I started. I hope there’s somebody in a climbing gym somewhere whose palms are sweating at the sight of some photograph I took.’

Richard will be giving a slideshow about his climbing life, what climbing has taught him and where it has taken him.

You will also see some samples of Richards photography in David Flanagan’s ‘ROCK CLIMBING IN IRELAND’.

Registrations are closed for this event