(by Kevin Byrne, from IMC Newsletter Summer 2004)
A review of Robert Roper’s book about the high-altitude life and death of Willi Unsoeld, American Himalayan legend. 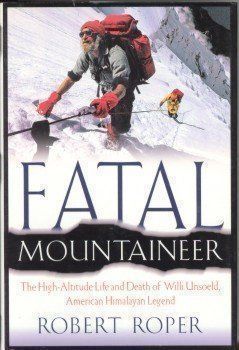 “…It has to be real enough to kill you” – so said Willi Unsoeld of outdoor adventure education. Sadly ‘it’ became real enough to kill him in 1979 at the relatively early age of 52. A theologian, professor of philosophy, life-long top-class mountaineer, family man, raconteur and one of the first Americans to climb Everest in 1963, by a new route and traverse, Unsoeld was swept away by an avalanche as he descended Mount Rainier in winter with a group of students – just a few short years after the tragic events that form the centrepiece of this biography.

A deserving winner of the Boardman-Tasker award for mountain literature, the book is a gripping read. In style reminiscent of the investigative and racy journalistic writing of Jon Krakauer, it recounts the story of the 1976 ascent of Nanda Devi by a team of top Americans that included Unsoeld and his daughter Devi – named after the mountain. Being the highest mountain in India, Nanda Devi is fittingly both remote and sacred to Hindus as the home of the Goddess Devi, consort of Shiva, who can be both bountiful and terrifying. Access to the peak is made difficult by a protective ring of very high mountains and passes that also maintain the unique ecology and climate of the Nanda Devi Sanctuary – a World Heritage site. Opened up to climbers for just a few short years (during which time the expedition took place) the Sanctuary quickly began to suffer the ravages of man. Fortunately it was closed again by the Indian Government in the early 1980’s and remains so.

Woven into the story of the expedition is Roper’s account of the life, philosophy and mountaineering achievements of Unsoeld, a colossus on the stage of American, if not world, climbing. Written in the present tense, the reader feels very much a part of the unfolding drama … an expedition begun with no clear objective, it had two nominal leaders, generational gaps, logistical difficulties, interpersonal relationships and tensions, a father-daughter combination, bad weather, objective dangers, chauvinism, illness and bowel-loosening fear. In short, ingredients far more exciting than your average blockbuster novel.

That the expedition succeeded was due largely to the determination and single-minded ruthlessness of the up-and-coming alpha male, John Roskelley. Roskelley’s personality and approach present the perfect foil to the heroic and philosophical Unsoeld. Tragedy struck late on in the expedition, after the summit had been achieved, and the reader is left wondering if it might have been avoided. Roper is sympathetic to his subject and perhaps in awe of a man who displayed charisma, intellectual vigour, good humour and physical stamina in such abundance throughout his life. But, as he draws on conflicting accounts of the events, Roper asks some serious questions and in the end exposes how empty and fragile all philosophy can be in the face of human loss and tragedy.

The writing is crisp and dramatic with frequent interesting, occasionally frustrating, but never dull, discourses on history, theology, mythology, sociology and even political dirty tricks. A natural leader of men in all his endeavours, Unsoeld lived life as he preached. This book celebrates that life, cut short at just 52, but already filled with achievements sufficient for any half-dozen high-flyers.

If you want a book that will strike fear and admiration in you and keep you turning the pages then “Fatal Mountaineer” is the one. Go buy it.

Me, I’m off to get my hands on John Roskelley’s book on the same expedition. A different perspective I suspect … watch this space.