(by John Duignan, from IMC Newsletter Summer 2011)
Reflections on the classic climb and recollections by the first-ascensionists. 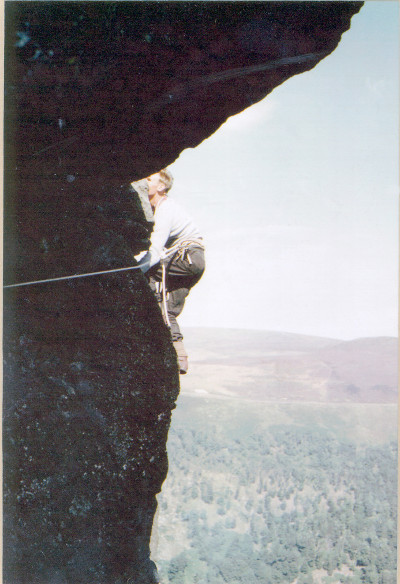 The photo he took on the climb hung in Frank Winder’s study during his lifetime.

Frank befriended Zeke Deacon and Vivian Stevenson on their visit to Ireland and invited them to Luggala to look at the Main Face. Frank, along with other IMC members, ensured that they got a good welcome on their trip. Deacon and Stevenson. along with two other Royal Marines climbing instructors, spent a fortnight that summer in Ireland. Stevenson wrote a superb article about their visit in the 1960 IMC Journal. Their visit was a tour de force – new-routing in the Poisoned Glen in Donegal with the Drasdo brothers; battling their way up Seventh Heaven in Connemara in the rain; and then travelling east. In Wicklow they put up Spearhead, rated Hard VS, in Luggala, and Cornish Rhapsody, rated Extremely Severe, on the Upper Cliffs in Glendalough. The “new routes” section of the IMC Journal reviewing the climbs of 1959 salutes their Luggala climb and its importance in Irish climbing.

Looking at the picture, I can’t help wondering about these men. Deacon is seen balancing on boots, hemp rope coils around his waist. He has made a thin hand-traverse – no positive footholds, only smearing with his boots – and edged out over space and made the strenuous move around the corner into the unknown. There is no way to reverse the move. Beneath him the climb drops away for over two hundred feet. What did he feel at the time?

Re-reading in the IMC 1960 Journal The Wearing of the Green by Stevenson, I see he gives his rank as Lieutenant and Deacon as Corporal. How did this team work? Did rank mean you point the way and bark an order?

Did the IRA campaign in the late 1950s give them any concern coming to Ireland?

Frank Winder passed away. I tried to find Zeke Deacon but he was not in the phone book. Worse – when I tracked down Harold Drasdo, he was under the impression that Deacon was dead. He did put me in touch with Vivian Stevenson.

Vivian Stevenson spoke in a strong voice that belied his years. He quoted Tom Patey as saying that Zeke Deacon in his prime ranked with Joe Brown as one of the strongest climbers of his day. He recalled the terror of poorly-protected moves on Seventh Heaven in a rainlashed Connemara and contrasted it with the beautiful day in Luggala, looking over the Guinness estate and Lough Tay. He spoke of receiving a warm welcome in Ireland and in particular of the IMC members’ hospitality. “One of the best climbing trips we had.” Happily he assured me Zeke Deacon was alive and well.

A few days later, Zeke Deacon phoned. He recalled being twenty-nine years old – four years older than Stevenson – and at the peak of his climbing career at the time of the visit fifty years ago. They had only known each other for five months but worked well as a team. There was no pulling rank and he continued to climb with his friend Stevenson for a further forty years. He had gone back into civilian life within a year of the climb. He too remembered idyllic weather on the day. The hand-traverse crux on Spearhead had caused him to fall three times – “Vivian caught me each time as I fell into space”. The physical fatigue was matched with the mental strain of not knowing what was around the corner after the crux swing without protection. “It was a point of no return – what I warned against as an instructor.”

It was a real pleasure to talk to these two great climbers and revisit their trip to Ireland. Frank Winder was wise to skip work that Monday and must have got great joy looking at this picture on his study wall. Our thanks to his widow Jeanne for donating it to the club.

Sincere thanks to Mrs Jeanne Winder and Bill Hannon for sharing this photo with the club. If there are any other photos relating to earlier IMC climbs I would be delighted to help research these and will ensure that the photos are returned to their owners. I can be contacted at duignanj at gofree dot indigo dot ie.