(by Paul Cullen, from IMC Newsletter Autumn 1999)
Along with three other climbers, Paul Cullen set a new record for climbing the Five Peaks in September 1999. But the experience left him with some misgivings … 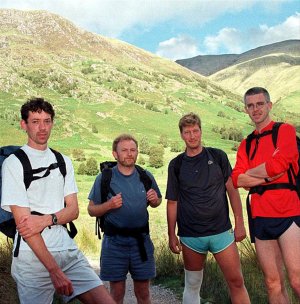 It’s three in the morning, we’re on the top of Snowdon and stars are shooting past in clear skies. The sodium lights of the north Welsh towns are winking in the distance but no-one is looking. Three people in the group are chattering on mobile phones and two others are discussing the merits of rival brands of mobiles.

A hellish vision of the future, perhaps, in which the world of the city invades the countryside, right up to its highest peaks. No-where is safe now from the depredations of modern technology, it would seem.

But then who among us does not use the same technology – Goretex coats, altimeters, wicking fabrics? The era of nailed boots and woolly jumpers is gone and mobile phones are only the latest device to find use in the hills.

The Five Peaks challenge in which I participated at the start of September continually threw up such questions. The exercise, which involved climbing the highest mountains in both parts of Ireland, England, Wales and Scotland, brought together a varied group of people, from reasonably experienced mountaineers to 40-a-day smokers who wouldn’t walk for a bus.

People who had never before set foot in the hills thus found themselves engaged in a marathon challenge involving a total climb of over 17,000 feet. They left behind their skills as public relations consultants, managers, computer trainers and broadcasters at the foot of the first mountain, Carauntoohill and embarked on unknown territory.

The results were mixed. Right from the start, the unfit suffered. Balmy late summer weather made the challenge easier, but the non-hillwalkers showed little knowledge of the ways of the countryside, and insufficient respect for the dangers of mountaineering. At least one of our group became seriously disoriented as a result of fatigue and carried on far longer than he should have.

We took the bog-standard routes up each of the peaks to save time. A 5 a.m. start in Kerry left us time to drive back to Dublin and then north where Slieve Donard was climbed in the afternoon. Then it was a race to get back to the ferry from Dún Laoghaire, a task made easier by Garda escorts which screeched us through the rush-hour traffic in Dublin at breakneck pace.

Snowdon was ascended by the Pyg track, and then we were whisked up to the Lake District to start the climb of Scafell Pyke at 8.30 a.m. Glorious early-morning sunshine made this my favourite climb of the challenge.

Ben Nevis was climbed by the standard tourist slog, and we hit the top in mist and rain at about twilight on Saturday. It was nightfall by the time the bottom was reached, 41 hours and 19 minutes after we started.

This was by some hours a new record for the Five Peaks, but I was left with some misgivings. Excellent back-up, especially a team of drivers and the Garda escort, was the key to breaking the record. In truth, we climbed at a pace that most IMC members would have little difficulty with.

And why undertake the challenge at all? The Five Peaks is something of an artificial construct, dependent on traffic conditions and ferry times (unless you have a helicopter). Modern man has sought new challenges and dangers to replace the adventure and risk that was once posed by infectious diseases, war or acts of discovery. Mountain challenges are increasingly popular, but their frenetic pace is at odds with the view of mountains as a place of peace.

And yet after I had written about the challenge in The Irish Times, there was a tremendous reaction. Friends congratulated me on our achievement and even a local barman came up to me and said ‘’aren’t you the mountaineer? Like that fella Falvey? ’’. Maybe these challenges aren’t so bad. Oh, and my colleagues raised £22,000 for charity.