You know how it is yourself. You wait ages for a bus, then two come along together. Well, similarly, an age-old IMC custom lay languishing in the doldrums, in danger of becoming nothing more than a folk memory, consigned to the scrapbooks of yesteryear. Then along comes a most unlikely white knight to recapture the glory of earlier days. Slim, slight, petite even, someone you would consider more suited to the haunts of the café latte clientèle, rather than the abode of the brash and brawny. Someone you could knock over with a feather. And therein lies the nub of the matter.

Saturday got off to a cool, windy, but dry start, and the early birds got some climbing in before the rains came, and come they did, and on rising winds. So the rock was abandoned for the N/E ridge of Tryfan, on the summit of which our heroes were tossed hither and thither, buffeted and bossed by the gales. Picking herself up for the umpteenth time, Aileen decided enough was enough, and vowed to take evasive action. Back down in Llanberis, she marched into Pete’s Eats, slapped her money on the counter and demanded that he hit her with everything he had. Obliging as ever, Pete staggered out some time later with not one, but two Big Jim Specials, one for her and one for Pádraic (and we’re not talking greasy spoon scenario here, rather something more on the line of a greasy shovel). Then under the watchful eyes of Allister, Peter and Margaret, the two of them set to work. Matching each other bite for bite, belch for belch, they continued the heroic struggle until the two extra-large dishes were wiped clean, thus taking their rightful places alongside such former stalwarts as Joe Hobbs and Brian Searson. Where do they put it all – listen, forget your carbon footprint, we’re talking carbohydrate footprints here, and of gastronomical proportions. I have it on good authority that Pádraic survived for the rest of the week-end on tea and dry toast.

Needless to say, there was an eagerness to work all of this off on the Sunday, and twelve of us, more dirty dozen than apostle-like, headed up to the Idwal Slabs. 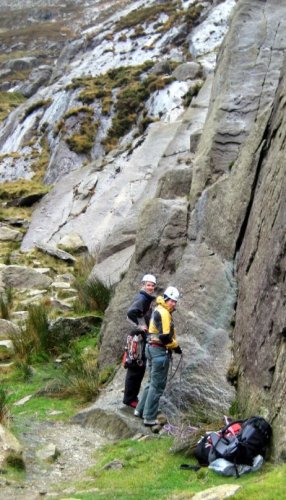 Operating within our own time zone, we were the first to arrive at the foot of the gleaming sheets of rock, and if the gleam was due more to dampness than sunshine, sure wasn’t the dust kept well at bay, and the sunshine appeared later. 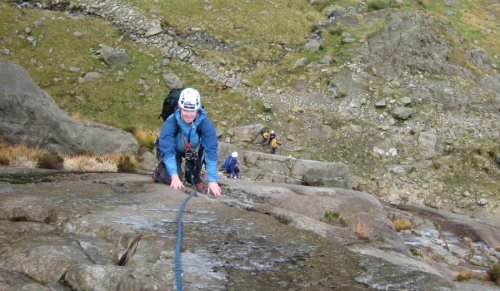 With Genevieve and myself in the van, closely followed by Conor and Jane, who were just ahead of Cearbhall and Martina, shadowed in turn by Allister and Aileen and, last but by no means least, Peter, Pádraic and Margaret bringing up the rear, we polished off pitch after pitch of sometimes dry, sometimes damp, but always clean, rock. The whole ensemble being ably directed from base by Liam.

It was at the top of the slabs that the newcomers discovered the truth of the old saw that it’s not all over until the fat lady sings, and in fact the old dear hadn’t even begun to clear her throat. In typical Celtic fashion, the descent began with a stiff and steep upward climb, that went on for quite some time, to be followed by an even steeper section of backclimbing that led, eventually, to the gully bed and the downward path. 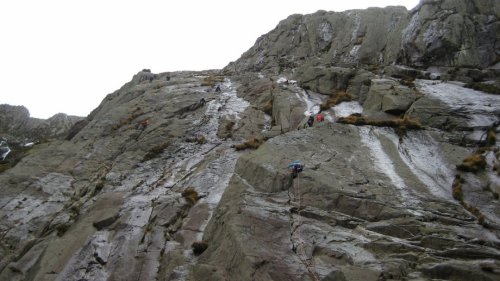 In addition to Tryfan, Snowdon was also accounted for, with Allister putting his mountain skills to good use. And what would the October week-end be without putting hand to rock. We climbed in The Pass, Ogwen, Idwal and Holyhead.

Our thanks to Gwydyr Mountaineering Club for the use of their well-appointed and well-positioned hut, it provided cosy accomodation at a modest price. Perhaps the fact that the hut was formerly a chapel had something to do with the gods looking kindly upon us.

We had good weather, bad weather, wind, rain, cloud and sunshine and, as usual, we coped with it all. We gathered in the evenings around the blazing fire in the cosy bar attached to the local hostelry, Tyn-y-Coed Inn, for sustenance, refreshments and chat about the day’s escapades.

Bara Brith is a well known, and popular, traditional Welsh cake, but Snowdonia is your original cut-and-come-again cake. Any wonder we left with sharpened appetites – like young Oliver Twist, we’ll be asking for more.