(by Gerry Moss, October 2008)
A return trip to the classic route F.M., on Slieve Lamagan in the Mournes.

I first climbed F.M., on Slieve Lamagan in the Mournes, for the one and only time, way back in 1990. But I must confess that, at the time, I treated this fine route in a rather cavalier fashion, scarcely affording it the regard it deserves.

My excuse is that, back then, we were in retreat from Fair Head and foul weather, and F.M. hadn’t figured in our plans. The last sound we heard on the Friday night, as we settled into our sleeping bags on the floor of the late Jim McKenzie’s barn, otherwise known as The Palace, was the sound of rain drumming on the roof. And wouldn’t you know it, the first sound we heard on Saturday morning was the non-stop rattle of the rain on the slates. We sat it out until mid-day, before conceding that climbing was not only ruled out for that day, but more than likely for the Sunday too, due to seepage.

So we packed up and headed south to the Mournes, a regular fall-back, and often the saviour of a rained-off climbing trip to the Head.

We spent the night in a cottage that had once served as a hut for the long-defunct Glenfoffany Climbing Club, and was, at that time, being used by a waning Belfast section of the I.M.C. Sunday morning was cloudy and damp, but better things were promised. Our targets included Dot’s Delight on Lower Cove and, rather than hanging around waiting for the weather to improve, we decided to do F.M. enroute to the Cove. Terry and Emily roped up while I, to save time, soloed up, sometimes in front, sometimes behind, sometimes to one side (I was young and foolish then and, though older now, little else has changed). Our arrival at Lower Cove coincided with the parting of the clouds and, with rapidly drying rock, everything went according to plan.

What brought all of this to mind was an email I received from Helen Condon in late June. Still on a high after successful participation in the Lake District meet, herself and Michael Scott had just climbed F.M., on one of the rare good days of the summer. She was feeling mighty pleased with herself, and rightly so, for it’s a grand route, one of several classic contributions to the Mourne climbing scene by Roy Johnston.

So I decided it was high time I returned to F.M., to make a less-hurried, less off-hand, ascent of the route. But I am no longer at the stage where I can treat a walk-in of well over an hour as a mere bagatelle, a trifling warm-up excercise, to be followed by a care-free romp up damp slabs. A slow learner, I am now a firm believer in the motto that states if you can’t be strong you must be cute and have reached the conclusion that what every older climbers needs is a younger, fitter, strong and keen apprentice. Enter Genevieve. We have a very satisfactory working arrangement – I do most of the donkeywork on the rock, she does most of the donkeywork on the approach.

Thus it was that, early last Sunday morning, weighed down with gear and rope, she powered her way along the track towards the shapely Slieve Lamagan, while I, lightly laden, trotted sedately behind. 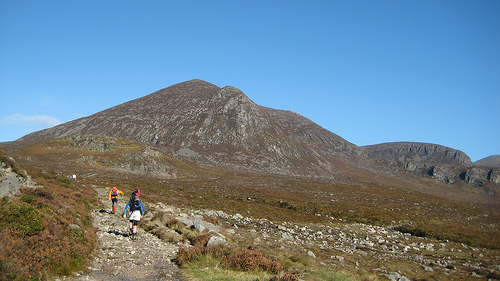 Wasn’t Sunday a wonderful Autumn day? Wall-to-wall sunshine, cloudless blue skies. True, we were buffeted by a strong and cold northerly wind as we headed up the valley, but the wind was blowing from the back of the mountain, and we felt sure we would be sheltered on the rock, and so we were. 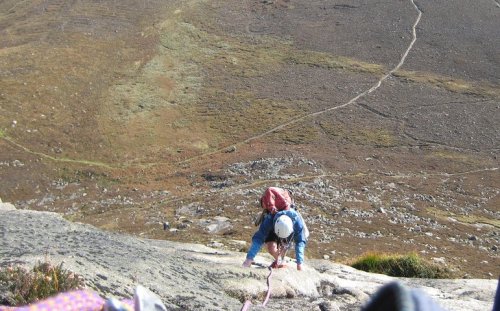 It was all very pleasant: bathed in soft, autumnal sunshine; padding up dry rock; enjoying the views out over the lovely Annalong valley. Encouraged by all of this Genevieve took over the sharp end of the rope, making the moves, route-finding, placing gear, setting up belay anchors.

We had a leisurely lunch on top, then scrambled back down to base, with never even the slightest hint of rain in the offing. A touch of Mourne magic. 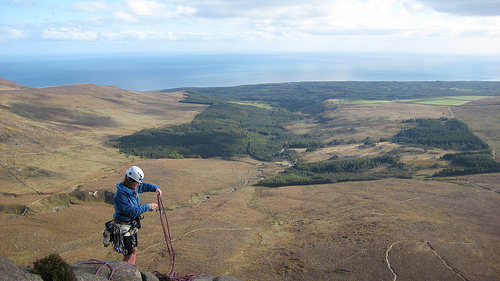 On the walk-out we caught up with two young women, returning from a day’s climbing on Lower Cove. Two of Eddie Cooper’s protégés, they had been shown the ropes at the Ozone Wall, introduced to real rock in the Mournes, taught how to place gear, then set free. And they soared. Still in the early stages of their climbing careers, their bubbly enthusiasm was infectious, their excitement and delight a joy to behold. The previous weekend they had been to Snowdonia for the first time, were blessed with good weather, and gobsmacked by the number of long, easy climbs available in The Pass and Ogwen Valley.

I know exactly how they feel. 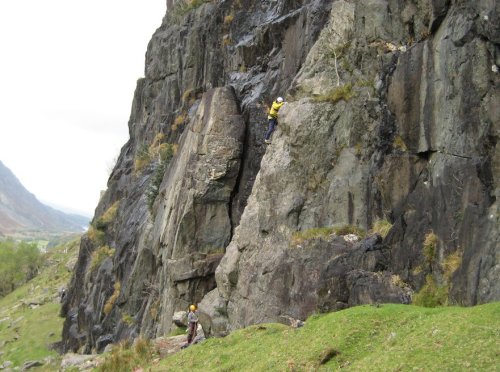