(November 2008)
Voting for the IMC Person of the Decade produced a result that would make any politician, even a dictator, green with envy. In a high poll against 250 candidates Gerry got 93% of the votes. This landslide win is nothing if not deserved. 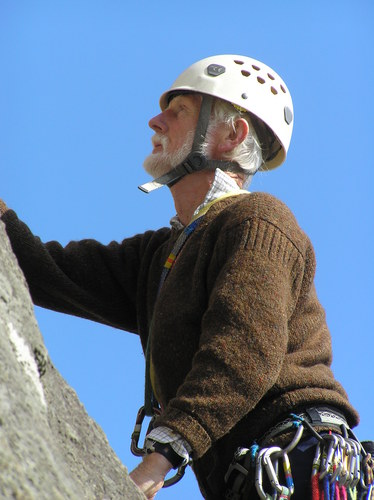 Although he is described as Person of the Decade Gerry has been a landmark in the IMC for more years than some of us would want to admit. At times it seems that he is not just a member but a one-man committee. If we could bottle him we could sell him.

His story-telling contributions to Newsletter and website are of the highest literary quality and would be well worth publishing as a collection.

Gerry’s foraging skills are second to none, he has been the finder of climbing opportunities at Ardmore, Knockadoon, Sheeps Head, Ashford, Barnbawn, Carrick Mountain, Loop Head, Robert’s Cove, Hook Head and lots of other places. Not content with finding these new places Gerry has been missionary in bringing people to them and broadening their climbing experience. He has also been a promoter of super crags such as Luggala and some of the many crags in the Mournes. These are usually hidden from our view by the close-up bulk of the Quarry and Glendalough which we sometimes seem to imagine are the only Irish crags open to us.

And finally he is respected for the standard of the meets he organises. Gerry does not work on the principle of telling people where he is going and giving them the option of tagging along. Somehow he has mastered the art of finding suitable accommodation that miraculously caters for exactly the numbers who attend. He has a way of getting people sorted with transport and enthused about the meet that would be the envy of a marketing department.

An added feature of Gerry’s overseas meets is that they are in places that cater for the full range of the club’s primary activity, mountaineering. Where Gerry brings you you will find a choice of “high E” climbs, V. Diffs and Severes, scrambling, mountain walking and combinations of all of these.

Gurb fhada linn é. May many learn from him and copy him.

(SOH)
Designed By HowlThemes
Back To Top