(by Allister Gerrard, June 2005)
Gran Paradiso lies between Mont Blanc to the north and the Dauphiné range to the south and at 4,061m is Italy’s highest and a good mountain to help acclimatise before attempting Mont Blanc. Although if you can get to something higher it might stand to you even better. Graded F+, it is mostly a rubble/snow plod, with a slope of 35 degrees.

We parked at the base of Gran Paradiso National Park at 1960m. The start of the walk up to the Hut Vittorio Emanuele II (2775m) takes about 2.5 hours approx. From the car park the start crosses a glaciated river and follows it for a couple of km before disappearing up a windy track alongside a waterfall. The views as you gain height are spectaular and on a clear day in June it was very warm with a heavy pack. Upon arriving at the hut, the feet revelled out of the hot boots & even more so being dipped in the freezing water of the adjacent pool. The hut itself is pretty good and we shared a room with 4 bunks and only half full for the night which was good. After an evening meal in the hut we hit the bunks at 9-10pm; ear plugs are a good idea.

We had an early rise at 3.45am, with people flurrying about the place almost in a panic as if the place was about to burn down. Panic breeds panic, so I moved into second gear, time to put the slippers on (only kidding). Tired with a broken night’s sleep, it was clothes on and down for breakfast. We set off at 4.30am into the darkness, torches lighting up the way ahead, we were first off of the blocks and ahead of the rest of the posse which we left ‘faffing’ around at the hut with laces, crampons etc. The route heads out directly at the back of the hut over a field of rocks and boulders etc. before turning right upwards into a wide chasm with steep snowy ground on both sides. At this point, after 30 minutes of walking, we stopped and looked back and could see the ensuing posse behind, a series of head torches all the way back to the hut marking the route back. It was our turn to put on the crampons and harness etc. and the peloton started to pass us as they had already done all this; we were in no race or rush. We ploughed our way up through the snow into what was like a short V-shaped valley, which eventually swung around to the right and upwards to more open ground. Heading out of the valley we had to move in single file and it was clear already one or two were struggling with the altitude as the pace was slow and snow was up to our knees on this steep section, I wasn’t complaining and happy to take it handy. When the ground opened up again and widened we moved off into our own and approximately half way up stopped on some rocks for a bite to eat, to chill out and take in the views around. We could see ‘Ciaforon’ which we had climbed the previous day; we reminisced about the previous day’s climb, which was more technically challenging.

The rest of the walk up was mostly just a snow plod; however, the altitude slowed us ever so slightly by each step as we neared the summit. Just before the summit there is a little scramble over some bare rock, with one short narrow very exposed ledge to cross in crampons, however, we were able to clip into a rope anchored to the rock when crossing this point, so it was no bother. On the summit our lady stands on top – ‘The Madonna’ with magnificent views. We had a clear day and views of the North face of Mont Blanc (to be our next challenge, not the face though), Matterhorn, Mönch etc. 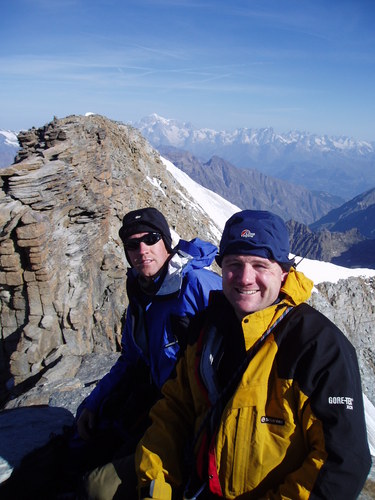 John and Allister on the summit of Gran Paradiso 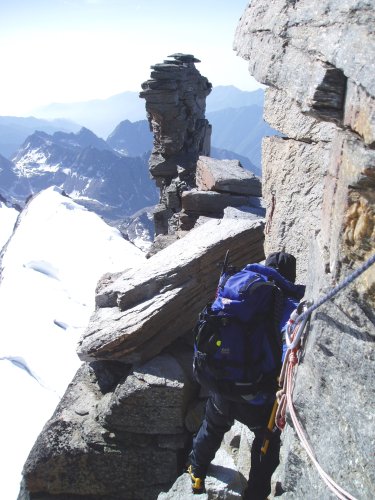 John stepping off the summit of Gran Paradiso

The descent was relatively straightforward, some deep snow on the steep ground with sheets of ice underneath ensured the odd uneventful slip. Finally, down at the hut, we got a breather and peeled off the layers in now the midday sun. After a short break, we strolled down to the car park at the base of Gran Paradiso National Park, passing these awesome glaciated rivers on the way down, crashing down endlessly. A recommended route for acclimatising or as a first 4000’er when ready to take on your first alpine ascent, without a guide. 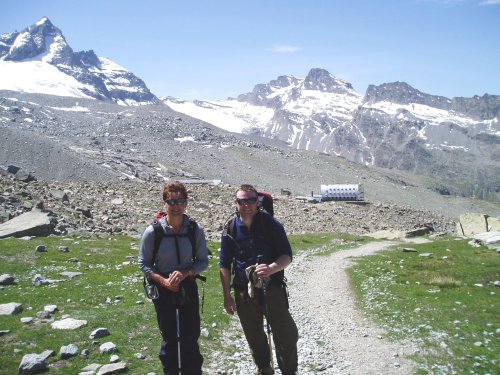 The drive back to Chamonix took approximately one hour. The next day we headed for Mont Blanc!