The cold snap at the end of Feb was probably the final throw in yet another year of poor winter conditions on the Irish hills. These days the west coast may get more snow than the east but nowhere seems to get any more ice than you could shake a shiny new Charlet Moser Quasar at – a steal by the way at €500 the pair, excluding the leashes! Even Scotland has been having a lean time of it. But if you’re an optimist and still have spare cash after forking out for the Quasars, the Rambo crampons, a rack full of Black Diamond Express Ice Screws (excellent value at only €75 a pop…oops) and of course the fully insulated Goretex-Titanium-Fibre-Optic-Ergo-Metric-Fully Branded Babygro for that all-over snugly feeling, there are some good deals available right now on slightly used ski-lifts in the Highlands – one careful owner, fully serviced, stored in a garage etc – guaranteed to whiz you skywards to your very own winter playground!

A few miserly millimetres of snow, barely enough to dust the rounded tops of our beloved Wicklow – that seems to be all we can expect. But then, just when you think there isn’t an icicle’s chance in hell, you arrive down one day, no axes of course, to find the whole place plastered in ice. Every water course, every boghole, every bit of oozing slime, frozen to a perfect consistency. Frustrating or wha?.

Much more often though, you find the exact opposite. You know the scenario… Minus 10 in the city for six days running, high expectations, plans made, a struggle out of the scratcher hours before dawn, blindly intent on being first to attack the bulging ice that has surely been building all week in the North Prisons. Ah yes, the thrill of the chase, how satisfying to conquer the virgin ice hours before the hordes … except that as you peer through the swirling mist you find only wet miserable bog, the water gurgling away happily and the slime oozing with its usual consistency. In short, full summer conditions. Even more frustration…and embarrassment to boot as you sidle past the walkers on the summit, afraid they’ll spot the gleaming Quasars and the other mouth-watering technology.

Why is this? Why can’t we seem to predict the ice conditions if it’s cold enough in the city to freeze …. well, your water tank, say?

In my experience of searching for the exclusive and elusive Wicklow ice there are a few things that need to be factored in to reduce the guess-work. One critical item is whether or not the hills have a blanket of cloud while the surrounding country-side does not – especially at night time. Of course ‘blanket’ is the operative word here because if the hills are cloud-covered they simply won’t freeze. Meteorologists sitting in Dublin may be able tell whether Lug has a blanket of cloud when the stars are bright in the suburbs but so far I haven’t got in on the secret. More than once I have been disappointed with the amount of freeze and can only put it down to cloud cover.

Something else to watch out for is wind. In perfectly still conditions it takes a deep cold to penetrate flowing water. But … with a strong wind and cold air the wind chill can be enough to create sprays of water that will freeze and build up to considerable thicknesses. Sitting at home it’s a bit easier to know what the wind has been doing as well as the temperature so next time keep an eye on wind speeds when the temperatures are looking promising.

A third thing to keep an eye on is how wet or dry the weather has been in the previous week. The best ice is often found where there is continuous slow seepage. But seepage dries up if the rainfall amount has been low, though, on the plus side low rainfall will mean that streams will be low and may freeze up where otherwise they might just thunder on.

In general the best conditions for ice in the British Isles are created by freeze/thaw conditions. Continuous sub-zero conditions over a week or so, while seeming to promise a lot, might actually create very little ice. Good freeze/thaws don’t often happen here – the thaws are often too strong. So there is a fourth ingredient … fluctuating temperatures, cold at night but above zero during the day works best.

A fifth ingredient might be snowfall. We tend to associate snow with ice but this is not always the case. In fact sometimes the best ice is to be found when there is no snow. A light fall of snow followed by a rapid melt can create surface water, which will freeze. But a significant snow fall can insulate the ground and prevent the turf and seepage from freezing as well as hiding the best lines. Good ice does not require good snow … and good snow does not usually result in good ice.

So there you have it … well some of it anyway if my experience is anything to go by. I’m sure there are other subtle factors at play but in conclusion I’d just say that if you’re searching out the elusive winter ice, be prepared to analyse a bit more deeply and you’ll be disappointed less often. Maybe you’ll even be pleasantly surprised from time to time.

Oh, and by the way those Quasars are last year’s toys. You know it! Deep down you know you really should trade up to the latest model. Go on and do it! If you don’t you’re only fooling yourself…and you won’t be ready for the Big Freeze in 2005. 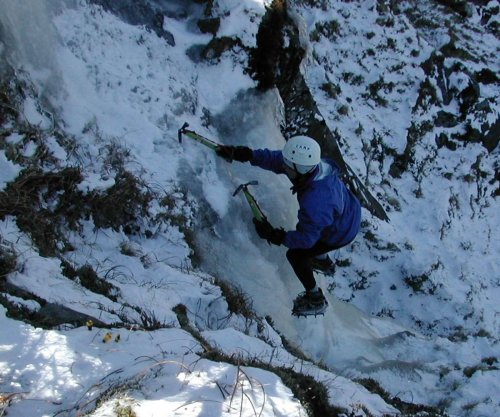