(by Gerry Moss, July 2010)
A great day’s climbing on the seacliffs of Knockadoon, in east Cork.

Headed south with Joe on Saturday to the seacliffs of Knockadoon, on the tip of Youghal Bay. A glorious day, as promised by the Met men, with blue skies and and a fresh breeze. Our arrival coincided with full tide, so, while waiting for it to recede, we sussed out a previously unclimbed buttress, abbing in to check for possible lines. 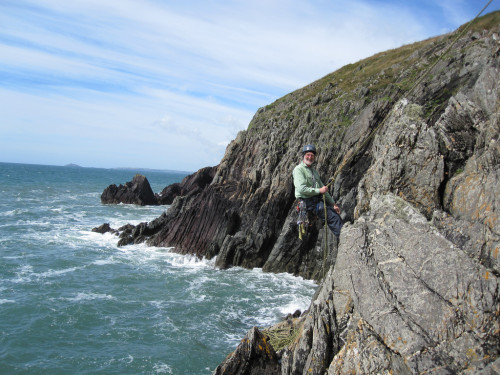 We spotted two, the first one involving tackling a small overhang head-on. But after the overhang had defeated both of us, I sidled around to the right and sneaked up on its blind side.

We abbed down again, this time to the bottom of a chimney just left of the face, and Joe put up a pleasant Mild Severe, his first new route at Knockadoon. "Escape from Hades" climbs a narrow chimney, breaks out left for an airy traverse, then tackles the break just left of the overhang. 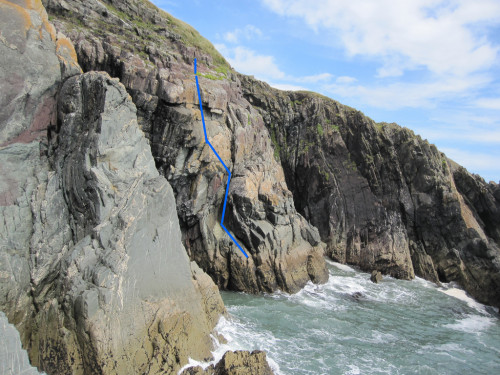 We moved on then to West End Wall, the area with the steepest climbs hereabouts, and here I was repulsed not once, not twice, but three times by a line I had put up a few years ago. Which goes to prove that rock is very much akin to young people nowadays – no respect for their elders. The only possible way to save face now is to bump the route up a couple of grades.

Normally, we would have this place all to ourselves but, in the midst of my struggles, I was pleasantly surprised when Peter Britton popped his head over the top and greeted us. Before he moved down to Clonmel, Peter was a long-time and active member of the IMC and, during that time, we shared some memorable climbing weekends and Alpine trips. He is now one of the driving forces behind the Rathgormack Climbing Club, and has been very much involved in putting up new routes in the Comeraghs in latter years. Peter and I were the first to put up routes here on West End Wall, back in 2003. He was accompanied on Saturday by Stephen Gallwey, the creator of many of the impressive lines on the big cliff at the back of Coumshingaun. 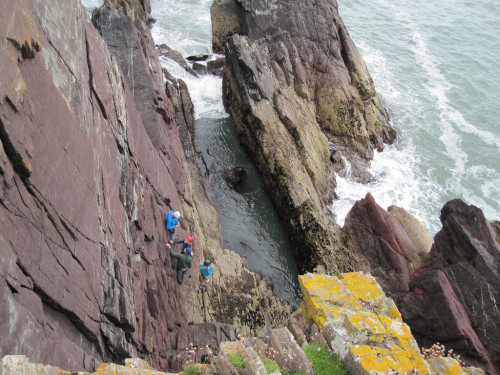 They each had a young daughter in tow, and it was great to see the two girls, both accomplished climbers, scramble happily over the wonderful sandstone slabs that abound in Knockadoon. 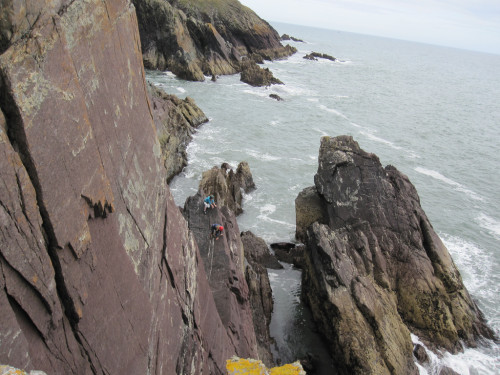 We pressed on with the climbing, aware that rain was promised for about four o’clock, but we were packing our bags sometime after five before the first few drops appeared, bringing to an end another great day on the sea-cliffs.

Incidently, we met, as arranged, at the Spawell carpark, but the first thing we saw was a new notice, stating that parking was for customers only, and other cars would be clamped. We decided not to risk it. So, another option scuppered, then.