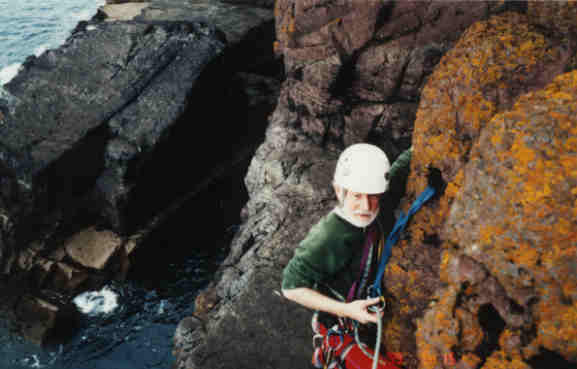 It’s ten miles and more from the town of Kilkee to the lighthouse on the tip of Loop Head and that whole stretch of coastline is composed mainly of seacliffs. Mile after mile of beetling overhangs, huge sea caves, sweeping slabs and rockfaces of up to 80m in height, facing out over the turbulent Atlantic. Most of it is unclimbed and, some would argue, unclimbable. But is it? With so much rock, there is, there has to be, opportunities for bold, adventurous outings, for modern day epics. It seems a great pity that this stretch of Co. Clare’s coastline remains largely untouched while the hordes jostle for room on the ledges at Ailladie. Granted, Loop Head is a different kettle of fish to the Burren and would not be to everyone’s liking. The Head being more akin to the seacliffs of Gogarth, it calls for commitment and skills different to those required at Ailladie, but that’s no bad thing, surely?

There has been some exploration of Loop Head over the years and, while the number of climbers has been small, their names will be familiar to most. It should come as no surprise to learn that the first recorded climbs were at the instigation of the ubiquitous Steve Young (the man who discovered Ailladie) back in the mid-seventies, when he was a leading light in the IMC. Climbing with Dónal Ó Murchú, Jim Leonard and others, a number of routes, mostly on slabs, were ascended. While some of these lines finish on dubious rock, others give sound, well-protected climbs, on huge slabs, in magnificent surroundings. Shortly after this the very tip of the Head was visited by Clare, Calvin, and Dermot Somers. Here too, a few years later, the late Tom Ryan did some good VS routes with Stephen Gallwey, the Comeraghs specialist. This period of exploration concluded with an ascent of Dermot and Grania’s Rock by the inimitable Mick Fowler, with Steve Sustad, in an outing that included an approach by swimming and an escape by Tyrolean traverse.

It is probably correct to say that none of these climbs has had a second ascent, as they are not included in the Clare guidebook, which is confined to the limestone cliffs of the Burren and Aran Islands. I think this is a great pity, as their inclusion might prod some of our younger climbers into showing some of that initiative so much sought after at the moment.

I spent a week walking part of the coastline of West Munster with my wife in the spring of this year and noted several locations worthy of closer scrutiny. One of these was the area known as the Bridge of Ross (fair play to them, they almost got the name right) on Loop Head, GR 735 505. On the Northern fringes of Ross Bay, the Bridge of Ross is an area of outstanding beauty, with magnificent rock architecture, majestic Atlantic rollers creaming across rocky reefs and spectacular breakers surging high up the cliffs.

Now, in spite of all this pontification about lack of enterprise etc, it must be conceded that the small team that assembled at the Bridge of Ross on the June Bank Holiday weekend could hardly be described as the Cutting Edge of Irish Climbing. Nor was it cast in quite the same heroic mould as those that preceded it. Not so much the Dream Machine, more like Dad’s Army, really. But, these trifling details apart, we had everything going for us. We were blessed with three days of fine weather, though high seas, driven by strong Northerly winds, prevented us from attempting to climb any of the sea-facing crags on the headlands. However, when you can’t be strong you must be cute, so, being nothing if not resourceful, we coped well with the stormy conditions and winkled out an enjoyable collection of short (up to 20m) routes, against a background as fine as anyone could wish for. In addition, we spent at least as much time exploring the coastline as we did climbing and came away with lots of ideas for future visits.

The area is described from W to E and the climbs from L to R when viewed from below. The first two slabs are easily spotted, being on either side of the little bay immediately in front of the car park, which is signposted. 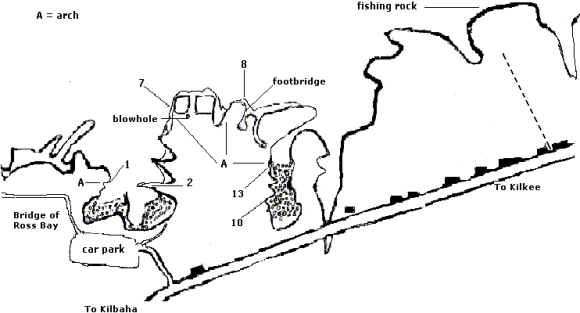 Arch Slab. On the W side of B.O.R. bay there is a slab forming the L side of an arch. The slab has a diagonal crack in its lower section, two corners on the upper L hand side and a short, steep wall at the top. Abseil down to a belay in the diagonal crack, at a point where there is a blow hole running through to the arch: an atmospheric place when the seas are surging in. (Low to half tide only).

Bay Slabs. These are the slabs jutting out into the bay on the E side. Approach by boulder hopping from the foot of the slipway at the back of the bay, or by abseil.

2/  Crystallographer’s Delight.  Severe.
The L side of the slab has an overhanging band running across it at about 4m. Start below a crackline in the centre of the upper section. Climb steeply to the overhang and follow the crack above.
L.C. G.M. E.H. 5/6/99

Square Buttress 1. There are two obvious square-cut, flat-topped buttresses on the E tip of the Bridge of Ross bay. These climbs are on the W facing wall of the W buttress. Access to the foot of the wall is by abseil (low to half tide only). Due to tidal restrictions only one route was done on this wall, but there are a number of steeper possibilities.

7/  Escape Route  Diff.
Start below a groove at the R end of the wall. Climb steeply on large holds until it is possible to move R to a large ledge. Continue more easily to the top.
E.H. L.C. 7/6/99

Footbridge buttress. The following climbs are approached by crossing a small, black footbridge, spanning a channel about 2m wide. Access to the footbridge can be gained by scrambling down some 30m to the E and traversing back along the shoreline or by abseil. (Low to half tide only). From the footbridge move 3m R to the foot of a black groove.

Little Zawn. About 50m E of BOR bay. Approach by a steep grassy track at the back of the zawn. With the exception of the last climb all the routes here are non-tidal. On the W side of the zawn are two steep slabs, the first route is on the L slab.

13/  Moss Bridges.  H.S.
Start on boulders just left of the mouth of the arch (most tides). Climb the arete on large holds until it is possible to make an airy and thought-provoking traverse out R over the edge of the void, go around a rib and finish up the short corner.
L.C. E.H. G.M. 6/6/99.