(by Gerry Moss, February 2008)
A winter climbing trip to the Mediterranean’s warmest islands.

Having purchased the newly-published guidebook, Rock Climbing in Malta, just before Christmas, Liam and I spent the last week of January enjoying splendid trad climbing, on wonderfully rough, sound limestone, on Malta and its neighbouring island, Gozo. Spring comes early to Malta, and wild flowers were abundant on all the cliff-tops. 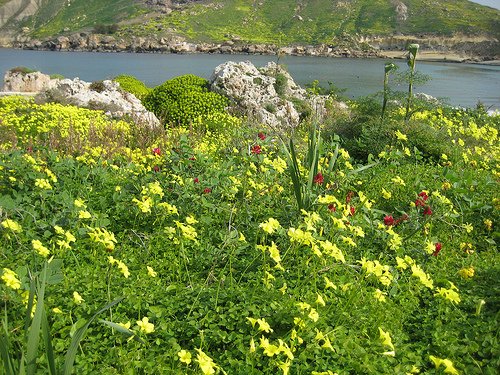 There are several fine inland crags, like this one shown here, Commando Ratlines … 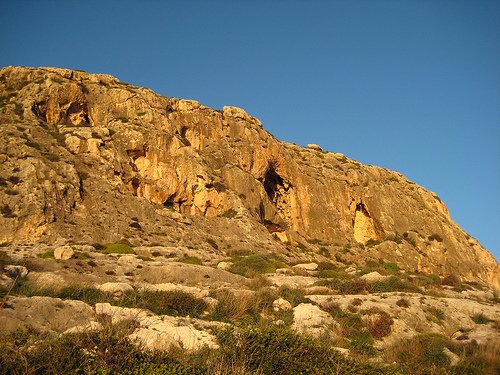 … but, for an exciting atmosphere, it’s hard to beat the many fine slabs and cliffs lining the coast. 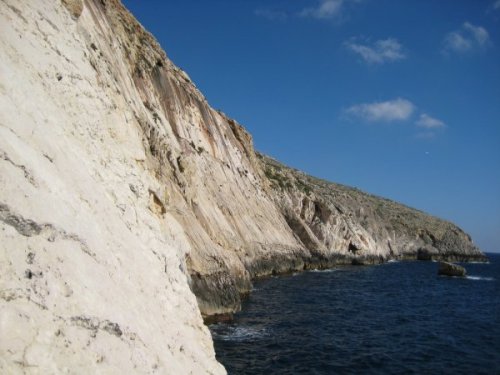 On the slabs the abseils were often quite gentle, and the routes correspondingly delicate. 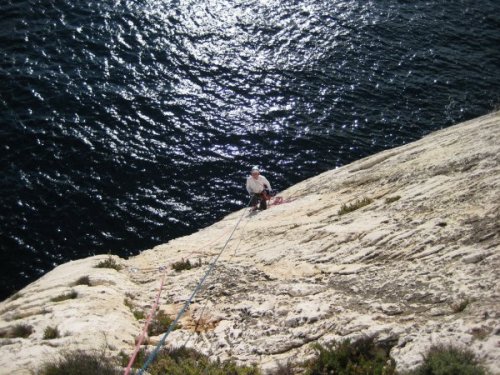 But some of the steeper faces called for careful assessment before making committing abseils in search of small stances above the azure sea. 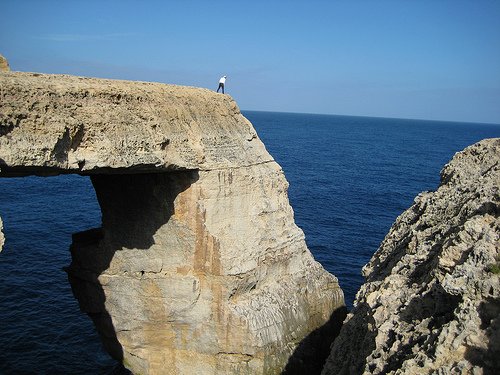 However, the exhilarating jug-pulling encountered on these faces made it all worth while.

The multi-pitch routes were miniature voyages of discovery, and careful study of the guidebook was the order of the day, … 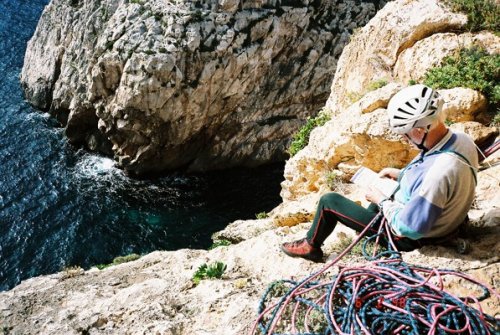 … with, sometimes, a bit of downclimbing called for, and the negotiation of blind corners … 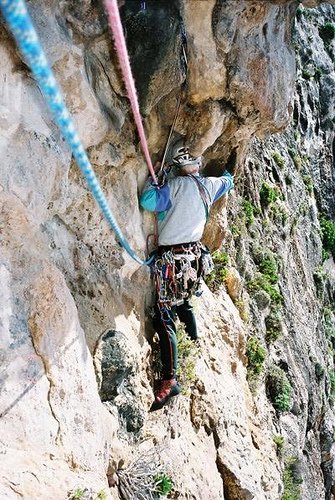 … in search of hidden caves and big roofs.

All very enjoyable, with a big cliff atmosphere and a wonderful backdrop.

Malta enjoys the warmest climate of all the Mediterranean islands, and our weather was marvellous, with sunshine all the way, and not even the slightest threat of rain. It was, at times, almost too warm inland, but a delightful, refreshing breeze could be relied upon when climbing on the sea-cliffs.

The valley period between Christmas and the Mid-term Break, is a good time for travel bargains – our return fare, with all extras, came to 100 Euro each. We stayed b&b (a very substantial breakfast), in a 4 star hotel for 13.50 euro per head per night and dined there every evening for 9.95 euro excluding drinks. Our day trip to Gozo cost 20 euro return for the car and two people.

Our hotel was choc-a-bloc with Ancient Brits: grumpy old men, doddery old dears and winsome widows, many of them there for breaks of up to eight weeks, fleeing the rigours of winter in places like Manchester and Leeds. We melted into the crowd: comparing ailments and remedies; grumbling about our governments; complaining about the cost of living and, of course, despairing at the behaviour of kids nowadays. But, eyed speculatively by the many merry widows in residence, we skipped the bingo sessions and chickened out of the chance to dance the night away to the strains of Cliff Richard’s Greatest Hits.

Car hire in Malta is cheap, but so too, it seems, is life. The most hair-raising experiences we had were on the road, not on the rock. Officially, they still cling to the inherited British system of driving on the left, but most of them are Continentals at heart, and yearn to drive on the right, which they frequently do, especially when passing other cars. Matters are further complicated by the usual 18% undecideds, who compromise by driving straight down the middle. Though they may be ambivalent about the British rules of the road, they are fully committed to the Imperial system of measurement: thus the upper speed limit of 70kph is freely translated to mean 70mph and is applied evenly on city streets and rural roads. This addiction to speed is all the more surprising when you consider that, at an overall length of 27 kilometers, no car journey is likely to take more than 30 minutes, and it would be possible to walk from one end of the island to the other during the course of a morning. Though it must be stressed that walking and cycling on Malta’s roads could definitely be classed as adventure sports . We quickly learned to avoid the area around Valletta and the Three Cities (thankfully, the climbing is nearly all on the other side of the island). Gozo, on the other hand is more relaxed, with less traffic, but an equally impressive coastline.

The guidebook lists well over 1000 routes, spread over all the grades from Diff up. Though the bulk of the climbing is trad, a couple of crags offering sports routes, and some bouldering areas, are included. Check out malta-rockclimbing.com for more details.

All in all, a great trip, and highly recommended. I think we’ll be doing a Terminator on this one.