(by Donald Gill, from IMC Newsletter Autumn 1999)
A trip to the Alps for the MCI meet. 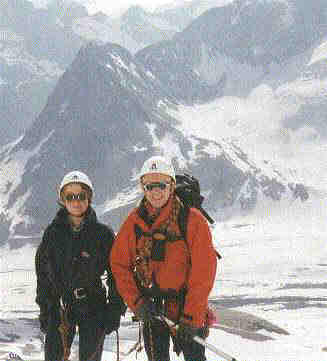 The Air Engadina aeroplane from Geneva was late in arriving at Dublin. When it landed it was not a powerful jet but a Dornier twin engine turbo prop with a yellow tail. It seated 30 passengers when full. The flight should be interesting! There were several MCI participants for the Alpine Meet on this flight and we were all overweight. Backpacks overflowed with tents, beds, ropes, climbing gear and more gear of every conceivable kind for alpine survival and comfort in camp. "No excess baggage charge this time" said the Swiss check-in girl, but "you will be charged excess on the way home". The two and a half hour flight was exceptionally smooth and lunch was washed down by a couple of glasses of complimentary champagne. Life was bliss at 26,000 feet, or twice our expected climbing (in boots) height! The train terminus was under the Geneva airport. The Milan express followed the shore of Lac Léman and up the wide Rhône valley between snow-capped mountains. We got out at Sion but the last bus to Arolla had already departed. However a yellow Post Bus brought us part way up the valley to Les Haudères. The driver kindly telephoned ahead for a minibus and trailer for the final leg of the journey to the campsite. We arrived at sunset and quickly erected tents.

Arolla is in the Valais area of Switzerland, in the southwest, where French is the spoken language. It is about 35 km up a valley on the south side of Sion and has an official altitude of 1998m. The campsite is in the valley below the village. It is surrounded by towering snow-covered mountain, with many glaciers hanging in suspense on their downward journey with their blue green melt water tumbling down the valley. Settling in was easy and clear blue skies on that first day enticed one to explore the village with its wooden chalets and to consult guide books and maps over a cool drink outside one of the small chalet hotels. 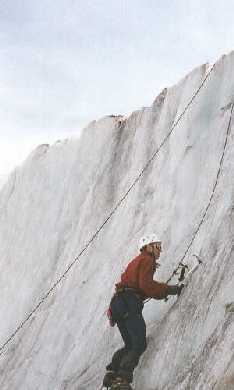 There were about 80 MCI members in the campsite with a large proportion out on the mountains at any one time. Frank Nugent, Chairman of MCI, had arranged a glacial training course for those in need. On Sunday the first group set off for a nearby glacier and were divided into groups of 5/6. Our instructors were Dawson Stelfox, Calvin Torrans, Robbie Fenlon and Murray Hamilton. I was with Dawson who quickly put us through our paces walking and climbing up and down the icy slopes with crampons and ice axes, and also cutting ice steps without crampons. From there we learned to climb ice cliffs with an ice axe and an ice hammer – suitably top-roped with ice belays screwed on to the top of the cliffs. Using the same cliffs we practised crevasse rescue technique with victims acting conscious and able to assist, and unconscious and dead weight. A system of pulleys using crabs and prusik brakes was quite effective but very hard work if the victim was unconscious – we earnestly hoped that our climbing partners would avoid falling into a crevasse! Finally the six of us roped up to practise moving together on the ice. It was time to put the lesson into practice and to hit the high Alps!

On the following day, Dick Delaney, Mary Reilly and myself headed for the Cabane des Dix at 2928m. This was quite an exhausting trek as we were feeling the altitude on the steep track to Pas de Chèvres at 2855m that overlooked the hut. The scenery was truly breathtaking with mountains all around. The route to the hut from the pass was down 20m of vertical steel ladder, along a very rocky track and across a wide, but gently sloping glacier. A steep track brought us to the hut where gear was hung up in the large hallway and we registered with the warden. The trek was over 5 hours from the campsite. There was time to relax before dinner which comprised soup and delicious chicken curry. Most of the hundred-odd residents retired to the dormitories early and the alarm was set for 05.00

The first alpine route was very memorable. At the suggestion of Frank Nugent we climbed La Luette, a peak beyond the hut at 3548m. The guide book referred to a track up a shoulder but this was obliterated by late snow. The pre dawn light reflected in shades of pink and yellow on the snowy mountains all around. We decided to contour towards the main glacier where two Belgium climbers were ahead of us and moving easily. Again we felt the effects of altitude and we were very glad to reach the snow-covered arête leading to the summit where we clasped hands in jubilation and took time to admire the view that was slowly closing in from the south-east. Time to go! We roped up for the descent and agreed that we should have roped up for the climb up the glacier and along the arête as a slip here would have been curtains. Forget ice-axe arrests in the Alps! The hut was a welcome food stop before continuing on down the valley to Arolla. The importance of an early start and early return were appreciated as the surface of the snow and ice had softened in the heat of the midday sun. There is greater security in climbing up or down frozen ice and snow in crampons.

The alpine system had evolved and our next route was up another glacier to Cabane des Vignettes at 3160m that was a base to climb Pigne d’Arolla at 3772m. This Alp towered over the campsite that unfortunately was hidden by cloud on the summit. However there were wonderful views on the way up and down the steep glacier overlooking the hut. Our performance at altitude was improving with each climb and this was assisted by adopting an alpine pace, suitably slow with few stops. The highest hut we visited was Cabane des Bertal at 3311m. This was a long slog up steep tracks from the Arolla valley Again a steep glacier led to a steep col with the hut perched high above it on a rock. It was approached by a rocky ledge with a chain support, followed by three ladders. The lady warden welcomed us at the top where we were exhausted and were glad to take ropes and gear off. We were aware the weather forecast was very bad and we just arrived in time before it started to snow. It snowed all night and hopes of climbing a couple of nearby peaks were dashed. Only 10 persons stayed in the hut that night out of a possible 70. Bad weather even deters the expert climbers! Down we went in the morning carefully picking our path down the glacier and the steep zig-zag track down rocks and grit to the valley floor.

Rock climbing was a popular spare-time activity with many of the MCI gang. There were crags quite near to the campsite and occasional large boulder the size of a double decker bus and bigger. These all had fixed rings on top and bolts to which one attached crabs and extenders on the way up. Further up the valley there were multi-pitch climbs, again with bolts. Swiss and French parents rear their young children on these boulders. I had signed on for a one-day course in Dublin and my instructor was Calvin Torrans. His general tuition was excellent on local climbing systems and general rope technique, but a full day on rock makes one weary. And that was a rest day! Alas there was insufficient time to climb crags and Alps. However, Frank Power, Dermot Dignam, Tom Fahy and Conor Burns were regular visitors to the crags. They were later joined by John Guy, who was warming up in a secret location in the French Alps. They completed some classic routes to the summits of Aiguille de la Tsa, a pinnacle overlooking the campsite, and l’Évêque, a mystical sharp peak behind Pigne d’Arolla. Conor also had time to run a secret escort agency on some rock routes and only lost his way once!

Towards the end of the second week Mary Reilly and myself made a second trip to the Dix hut with the aim of climbing Mount Blanc de Cheilon at 3869m. This was to be the last route and expectations were high. The journey to the hut was completed in two hours less than the first trip, reflecting better acclimatisation and fitness. At 04.00 the following morning more than half of the hut was up and scrambling for equipment and breakfast – pure bedlam! We set off in the pre-dawn light along a rough track on top of a moraine before roping up to climb the Cheilon glacier to the col. The route up the ridge from the col was difficult with a mixture of loose and icy rock, and a very steep glacier leading up to the snow-covered crest. A long arête of snow and rock led to the summit. Almost there! But there was a danger of being last on the mountain with a difficult descent. Prudence ruled in the guise of a Swiss mountain guide who was leading a small party of young teenagers all roped up. He agreed to let us follow him down the difficult rocky ridge onto the steep glacier. The ease and confidence of their moving together over rock and glacier made me realise that there is a long way to go to being the expert alpinist.

As we packed up gear for the journey home we said farewell to our many new, and not so new companions. A few had departed for Zermatt to have a crack at the Matterhorn. Some others transferred camp to Chamonix where Mont Blanc beckoned. We’ll be back! (And we escaped a baggage surcharge again – thank you Aer Engadina!)