Following our trip to Mt. Elbrus (5642m) in the Caucasus, Russia, in 2004, John Gorman and I chatted about what next? The following year, I was seriously thinking of going to the Alps myself, so I decided to give John a call.

On the evening of Saturday the 25th June 2005 (following on from U2 in Croker the night before) I met up with John in Chamonix. Over the next 4-5 days we would climb Ciaforon, Gran Paradiso and Mont Blanc. Although John and I had been to Scotland in winter, at the time we were not confident in our Alpine skills so we decided to hire ourselves an Alpine guide, Julie-Ann Clyma.

Julie-Ann drove us through the Mont Blanc tunnel from France and into Italy. On the drive the views were magnificent; Julie-Ann pointed out the impressive North face of Mont Blanc and some famous climbs she had done involving ridges and pillars, overnight bivvies on cliff edges, and so on. This woman had had some climbing CV (not to mention her PhD) – the Alps, Alaska, South America, and some first ascents. She had also been on four 8000m peaks, including the greatest of them all, K2.

A few hours later we began our trek up to the Vittorio Emanuele II hut (2735m), the refuge at Gran Paradiso national park. On the walk up we enjoyed tremendous views of glaciated rivers and falls thundering down the mountains, winding zig-zag paths, wild animals and good weather. After dinner at the hut we practiced our ropework for the climb the next day – our first climb of the trip, an attempt on Mt. Ciaforon, as an acclimatisation climb for later climbs planned on the trip. We headed to bed at 9pm, drifting off about 11pm, then being woke up at 4.45am the next morning. What am I doing here I thought, it’s my holidays, getting up at this hour, why didn’t I just go to a beach in Spain, rather than stepping out into the freezing morning. Julie-Ann reminded us that we were here out of choice; I could hear Shay O’Hanlon in my head, you do it because it’s hard, because you enjoy the challenge, because going to a beach is boring, hmmm. OK, I do like the mountains, time to get up, besides the challenge ahead had looked exciting. Out the door we trod at 6am, the sun just rising, we crossed over some rocks, boulders, glaciated streams to the edge of the glacier. We roped up together and moving together gradually made our way up the huge gently-sloped glacier, with La Tresenta (3609m) on our left, up the west side of Ciaforon. 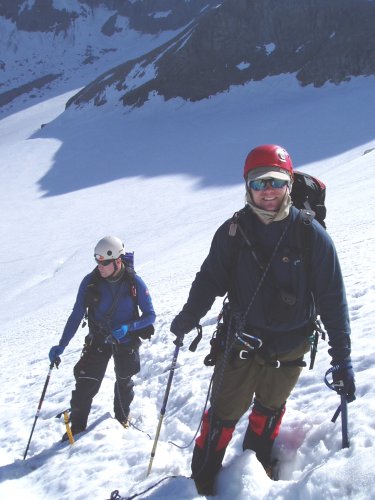 Near the top of the glacier and before reaching the rocky edge of the mountain, we had a 120m (approx.) steep section to climb. At first it looked easy enough, the equivalent of a Scottish grade I or II. We thought we could climb roped up without having to place gear. However, there was up to a foot of loose snow, on top of hard ice; the feet were unstable. We decided to climb this bit in three pitches. I belayed Julie-Ann as she led. The ice was hard and I struggled to find solid placements at times. An hour later we reached the col, prior to starting up the next section of rock. We had lost valuable time; everyone in the Alps always seemed to talk about time like it was as valuable as gold or chocolate. We had spent an hour climbing up the short bit of ice and snow. John and I weren’t too concerned about time at this point, as we were enjoying it. The rock climbing section ahead went up for approximately 500m with more snow and ice ahead until the summit. The rock looked OK for scrambling up in boots, however Julie-Ann decided to use the rope. I belayed her up as she disappeared up through a chimney of rock. The scrambling and climbing on rock added to the excitement of the mountain climb. The rock climbing varied from moderate to severe in places, we climbed quickly, however, we were slowed by the having to set anchors and belays etc. We found some bolts and pre-fixed anchor points along the way which helped with time. An hour later, after five to six pitches we reached the top of the rock climbing bit. Julie-Ann of course being trained as an Alpine guide was fixed on us keeping within Alpine guidebook time; conditions were tougher than expected and slowing us. 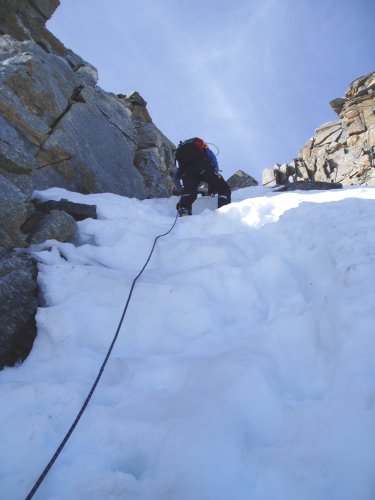 At the top of the rocky section we had some sheets of ice to cross. Unroped at this point we just had to watch our step while crossing the ice before reaching the snowy slopes again. On the snow again we made up good time. We reached the start of the last section quickly. The last section looked like a Scottish grade I/II snow again and we assumed we would get away with climbing without having to use gear. However, under the thin layer of snow was solid ice, so out came the rope again. Julie-Ann reckoned it was Scottish grade II ice initially. Each pitch gradually got steeper. On the third pitch, John and I were poised on the steep ice with our two front points dug into the ice and we had just the one walking axe. We waited patiently each time while Julie Ann set up the belay ahead with some ice screws. We used our free hand to balance ourselves on the ice. I could hear John whispering, as Julie Ann set up the anchors, “what’s taking so long”? He was feeling the ice melting through his thin gloves and the calves were staring to ache. Put your heels down flat in line with your front points, I said, to rest your calves, as if I knew what I was taking about (I had remembered Connor O’Connor’s friend Terry, telling me to do the same at the wall). The last two pitches Julie Ann-reckoned were 50-60 degree ice; she graded it at Alpine PD+, with an AD finish. I hadn’t a clue of Alpine grades – “A P Diddy who?”. Finally and not before time, we reached the top of the ice climb and 10 minutes later after a short plough through the snow we reached the summit of Ciaforon (3642m). It was certainly worth the effort; a clear day, we had 360 degree views of lots of Alps, including Mt. Gran Paradiso (4020m), which we planned on doing the next day. 50m down from the summit was the most beautiful blue lagoon of water to one side, an unusual sight. 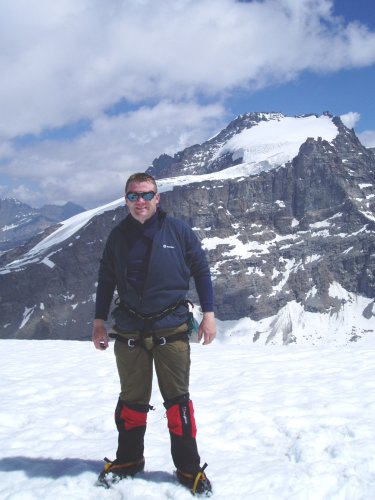 Allister on the summit of Ciaforon

After a quick bite, we decided to get moving before any potential storms came in. On the way down we tried to contour around the steep ice we had come up. However, we were still slowed by having to rope up and use anchors to cross some icy sections before reaching the rock climbing bit again. On the way down the rock, we scrambled down half of it to make up some time on the easier sections and used anchors on only the tougher v.diff/severe bits. As we reached the end of the rock climbing bit, a huge thunderous roar let out which echoed across the mountains for miles. That’s it, we’ve had it, I thought; here comes the storm, our punishment for taking so long on the mountain. Alas, my fears were put to rest, it was just a huge rockfall some place over to our right (where I’m sure there was no-one). We moved even faster. Before reaching the main glacier, we dug our heels into the steep snow section and began trudging down. I dug my heel into the ice below the snow and stopped suddenly, to witness the snow on top of the ice take off down the mountain; a few minor avalanches of snow slid down the mountain for about 50-100m. Wow, did I just do that? Better be careful. We were a little more anxious now and quickly made our way onto the main gradual sloping glacier. Roped up crossing the glacier, we stepped across a few thin crevasses on our way down before reaching the gravelly boulder field. We arrived back to the hut at 5pm. Our planned short acclimatisation climb should have taken us approx. 8 hours (by Alpine guide book time) however, it had taken us 11 hours due to the unexpected icy conditions. So much for easing into it all and we hadn’t met another soul on the mountain that day. This was supposed to be our easy break-in day; roll on tomorrow! John and I didn’t care though, we were happy to have had such a full day of mixed climbing; that’s what we were here for, for the adventure.

Next day was Gran Paradiso and thereafter Mont Blanc. However, that is another story!