(by Kevin Byrne, from IMC Newsletter Winter 2004)
A review of John Roskelley’s book. 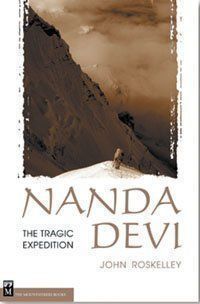 Having read the gripping account of Willi Unsoeld’s life in Robert Roper’s “Fatal Mountaineer” (see the review) I hurried to get my hands on this book so I could compare the two and pry further into the tragic events of the 1976 American Nanda Devi Expedition. I wasn’t disappointed. If “Fatal Mountaineer” was a terrific read, then Roskelley’s book, though unambiguously sympathetic to its author, is equally compelling.

Enough went on both before and during the expedition to fulfil the research needs of a gansy-load of PhD-seeking psychologists. A lethal concoction of leadership clashes, disputes over tactics, variations in ability, deliberate ambiguities, differences indeed about the whole point of the expedition – all spiced up with father/daughter and boyfriend/girlfriend inter-personal relationships – created a timebomb that was already ticking long before anyone got to the mountain. The expedition didn’t deserve to succeed. It was ill-conceived on many fronts including its timing vis-à-vis the monsoons, the ‘decision’ to have two leaders, one of whom hardly set foot on the mountain, (plus a climbing leader), the choice of members, the equipment list etc etc. Had it failed and had there not been the tragic and poignant death of Devi Unsoeld, the whole episode would barely have rated a footnote in the annals of modern Himalayan climbing – except perhaps as a study in how not to go about it.

But of course the expedition did succeed, due mainly to Roskelley’s ability and drive and, tragically, young Devi Unsoeld lost her life high on the mountain from which she was named. The local porters, enthralled by the generous and sympathetic hippy-like Devi, saw her untimely death as a great mystic event – the incarnated Goddess returning to her home. For the expedition members there was the uncomfortable knowledge that the tragedy might have been avoided. That knowledge undoubtedly remains with those who still survive.

Roskelley’s account makes compelling and exciting reading. It’s fairly typical of American authors in its no-holds-barred style. At first this is refreshingly objective even if it leaves an uncomfortable feeling of being entertained at the expense of others. But it is important to question whether the seeming ‘baring of the soul’ is fully honest and objective. Accepting responsibility for some things can boost credibility when blame is being placed elsewhere, often for more important failures. After reading both books, this juror remains undecided where the fault lay. Events were set in motion that seem to have led inexorably, in a sequence worthy of Shakespeare, to Devi’s tragic death.

The author claims that the book lay completed without a publisher for many years. It’s not difficult to see the reasons why. For one, Willie Unsoeld, a hero of American climbing does not come well out of it all. More importantly the whole tragedy was far too recent to justify publication soon afterwards.

Unsoeld died within a few short years of his daughter, in a climbing accident, just at the time Roskelley claims he was hoping to meet again with him. I wonder would they have met? Would they have looked each other in the eye? And what would they have said?

Nanda Devi: The Tragic Expedition
By John Roskelley
Published in 2000 by The Mountaineers Books
ISBN: 089886-739-8
Paperback
First published in hardback in 1987
About €20