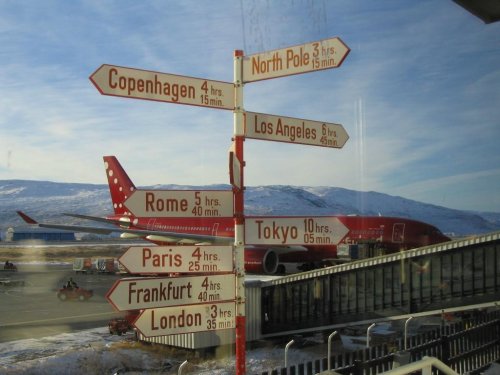 At first, flying over North Greenland in autumn is a bit like flying over a wedding cake, or a blank sheet of paper for that matter. Very, very white. As your eyes become accustomed to the view, the sheet of white begins to take on some form and various textures and contours become visible. First of all mountains, then frozen lakes and rivers and finally huge crevasses in the ice. This is the Inland Ice, an ice cap that sits on top of the second largest island in the world and all but smothers it.

My next twelve days were to be spent in the small strip of land beside Disko Bay not completely covered by ice. Like all distances in Greenland, everything is relative. In this case “small” still meant bigger than Ireland. We (my brother and I) arrived in a small turbo-prop plane at Ilulissat airport and landed on the river of ice they like to call their runway. The nice man from the national tourism agency who had offered by email to collect us met us. He regaled us with stories of Aurora Borealis (which he said he saw so often he didn’t even bother looking any more), icebergs and frozen fjords – this is what we had come for.

Ilulissat, like any modern frontier town, was interesting, but rough. The local shop had flat panel displays on the cash register (courtesy of the annual Danish government subsidy) but the customers still carried guns and wore overalls and boots rated to -100 C! We were eager to get moving, so we immediately arranged to join a boat that was heading out to the ice fjord for the day.

The ice fjord is a truly humbling experience. It is the result of the ice cap glaciers calving huge icebergs into a shallow sea and then those icebergs just keep building up until the pressure finally forces them free into the outer fjord. Even though we were on a sizeable fishing boat, we found ourselves staring up at enormous mountains of ice, some hundreds of feet high. As stunned as we were, we were totally gob-smacked when told that only one-eighth of the iceberg appears above water – it was a bit like sailing round the summit of Lugnaquilla. 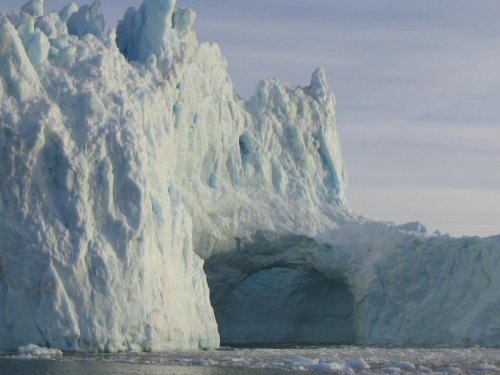 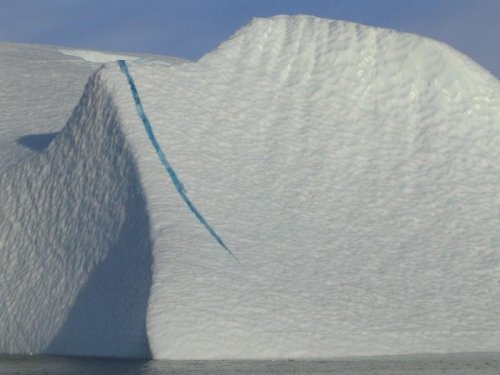 The bergs themselves form two types. First there are the “crazy tops”. These are new icebergs and the tops are twisted, contorted, full of crevasses and seracs. These are bits of broken glacier, which have just fallen into the sea. One look at these and you know why glacier travel is so dangerous. The second type is the “smooth tops”. These are crazy tops that have been in the water so long they have flipped right over so the water-smoothened bottom is exposed above water. Where crazy tops are frightening, smooth tops are beautiful and soothing. The time had come for us to explore closer, so we pulled up beside a smaller smooth top and jumped onto it – first foot straight into a narrow crevasse. Just as well, because the ice was so hard and slick that any slip would have meant a dip in the sea. The captain later told us that he doesn’t carry life jackets because if you fall into that sea, you are dead anyway.

Our main reason for going to Greenland was to get away from masses of people and experience some raw, untouched nature. That’s what we got when we hiked up the coast to Oqaatsut, a tiny fishing village two days walk away. The map showed us several possible routes, so we opted for one that brought us right up the coast via an isthmus, beyond which we could camp for the night. The journey was hard going, not least because the bog land over which we were walking was frozen solid and there were frozen lakes to be negotiated every kilometre or so.

Because the Arctic air is so cold and so pristine, distances are very deceptive. When we started our hike, we picked a hill in the distance for lunch. We were long past our lunchtime when we realised we were not much closer to the hill – a close examination of the map showed the hill in question was about 30 miles away! Negotiating the fjords was a tricky business as well. We got to one semi-frozen fjord, which was about 50 metres across. There was a 10-metre gap in the middle, which was not frozen, and the entire force of the river was blasting through that gap. We gingerly climbed over ice-covered boulders to the middle and steeled ourselves for the next step. With a deep breath and a prayer, we stepped into the water. You have not experienced cold until you’ve had a Greenlandic river flowing just below the family jewels. Very carefully, we baby-stepped to the ice on the other side and crawled onto it, gasping. A quick change of socks later, and we were on our way again. 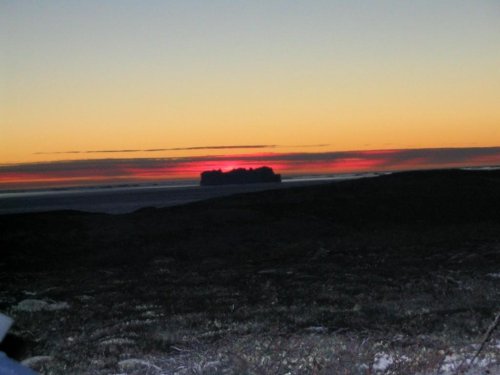 Our campsite was a magnificent location on frozen moorland overlooking the iceberg-strewn sea. Having hammered the pegs in, we sat down to watch probably the most amazing sunset I’ve ever seen. The sun even had the good grace to set right over a castle-esque berg in a blood red sky. Dinner over, we settled into our bags for the evening. Five minutes later, we were up again, scouring the area for boulders to hold down the flysheet which was now threatening to take off on a trip of its own in the gale force wind which had suddenly picked up. 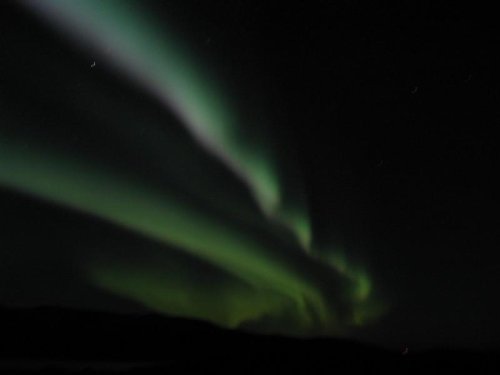 Back in the bags, we sat looking at an amazing night sky – the Plough looked as if it was close enough to reach out and touch. We sat enjoying a couple of Jamesons (with ice of course) and I was beginning to wax lyrical when my brother pointed out a streak of phosphorescent green moving across the sky – the Northern Lights! The next few hours were spent in silence, wrapped in down bags, watching nature’s own fireworks display. Curtains of green, white and rose swept across the sky and then fell like rain or soared like a flock of birds. I blessed the long exposure on my camera and crawled outside the tent to take some shots. Lying flat on the reeds and heather, I was able to stay out for about 20 minutes taking photos of the main reason we had chosen Greenland for this year’s trek.

Before arriving in Oqaatsut (population 40) the next day, we had one more obstacle to face – down-climbing a 150ft snow-covered cliff. By now we were feeling like Frodo and Sam trying to ditch the One Ring. Down we went, and arrived at our accommodation for the night, a really atmospheric log cabin with a paraffin heater and beds in the attic. Water came from melting bits of iceberg. It was very comforting to know that the water we were drinking was over 10 million years old and predated pollution. 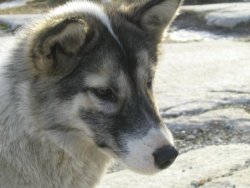 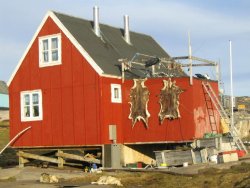 We took a boat back to Ilulissat the next day, after lazing around in Oqaatsut, looking at the sealskins drying in the sun while being followed around by friendly pups from the local dog sleigh teams. The people in Ilulissat are very accommodating and friendly. As my Greenlandic and Danish skills are limited (!), we mostly conversed through the international language of smiling, high fives and Tuborg. The people who spoke English told us some disturbing news. They said that over the last ten years or so, they had noticed the winters were getting warmer and the fjords were taking longer and longer to freeze over. This is a particularly acute problem in Greenland as there are no roads between towns and families rely on dog sledding to visit relations and to go ice fishing and seal hunting in winter. Global warming in Greenland would have disastrous consequences for the locals, as well as the rest of the world.

All in all, I couldn’t recommend Greenland enough as a destination for trekking and relaxing. While a lot of climbing groups head to the granite walls of South Greenland, North Greenland has a lot to offer in that there are fewer people and, in winter, it is truly spectacular with Northern Lights a-plenty and dog sledding to beat the band. In summer, the midnight sun is supposed to be a memorable experience. Autumn is not a bad compromise. You get a taste of the onset of winter, but still with enough daylight to travel around. Ilulissat, Greenland’s second city, has a human population of just under 5,000 and a canine population of just over 7,000. It even has a bar called Murphy’s although the locals said we were the first Irish people they had ever met, and the owner had just thought it was a good name for a pub!