(by Gavan Doherty, Irish Orienteering Association, from IMC Newsletter Summer 2004)
Orienteering is competitive navigation on foot. If you enjoy running or walking, if you are interested in maps and navigation, or if you like outdoor sport then orienteering is for you!

Orienteering is competitive navigation on foot. If you enjoy running or walking, if you are interested in maps and navigation, or if you like outdoor sport then orienteering is for you!

It has its origins in Scandinavia at the end of the 19th century, when ‘military messenger’ competitions were organised by the army. Participants had to find their way with a map from one location to another, across unfamiliar terrain, in the quickest time possible.

Distances were longer then, up to 75 kilometres! From these early origins, the sport has grown worldwide, becoming a recognised Olympic sport in 1977, and with the major Scandinavian competitions attracting up to 30,000 competitors.

How did it start in Ireland?

Orienteering in Ireland owes its origins to a group of enthusiastic Mountaineers / walkers (Joss Lynam, Diana Large and Seán Rothery amongst others) who set up the first few orienteering events here. They used Ordnance Survey maps of parts of the Dublin and Wicklow mountains, and competitors had to find 5 or 6 checkpoints on the map – this generally took 5 or 6 hours, as the courses were set out to suit the organisers’ tastes for a full day in the mountains.

As time went on, Orienteering in Ireland became more sophisticated, with specially drawn maps, initially in black and white and later in colour. Different course lengths were introduced, to cater for younger people, people who wanted to run a shorter distance and family groups. The features the checkpoints were on became more sophisticated with the maps – the checkpoints for the first few events were generally based on obvious features – ‘top of mountain’, ‘road junction’ – but as the maps became more detailed, the checkpoints were placed on smaller, less obvious features, such as ‘small marsh’, ‘gully’ etc. Orienteering in Ireland grown since those early days, with the largest competitions attracting up to 450 competitors of all ages.

So how exactly does it work?

Take a look at the map accompanying this article – this is the key! The scale is much larger than a standard Ordnance Survey (OS) map – while an OS map will show mountains, forests and roads, an orienteering map shows also small footpaths, rocks, fences, small sections of marsh … a lot more detail than on an OS map.

The scale of orienteering maps is usually 10:10,000, which means that 5 cm (about 2.5 inches) on the map represents 500 metres – the same length on a standard OS map would represent 5 kilometres! White generally means forest and yellow generally means open land. Green indicates thicker forest. Forest is normally described by how quickly a runner could cross it – white is ‘open’ or ‘run’, while thick green is known as ‘fight’! The start is shown by a triangle, the finish by a double circle, and each circle in between is a checkpoint or ‘control’.

When you get to an orienteering event, you can choose a course to suit your ability. Generally the shorter courses involve easier navigation, so are recommended for novices. When you pick your course, sign up – you will be given a card (a ‘control card’), which you will use to punch at each control, proving you’ve been there.

You may also get ‘control descriptions’ – this is a list of your controls, with information on the exact location of the flag (e.g. ‘at the path junction’ or ‘at the west corner of the fence’), and a code number. Don’t worry too much about the exact location of the flag, but the number is useful – you may see other controls while you are out that aren’t on your course, so use the code number to check that each control you visit is in fact yours. 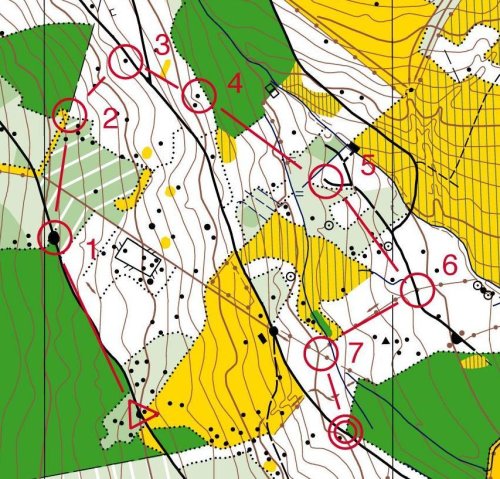 Fill out your details on the control card (your name etc) – don’t worry too much about classes or club when you first start. Ask for a start time, and make your way to the start. You will be asked to hand in a tear-off section of your control card (‘stub’), so that the organisers know exactly who is out there. When your time is called, you will copy down your course from the master copy or ‘master maps’ and away you go!

Starting at the start triangle, navigate your way to the first control. At each control, there is a flag with a punch (a bit like a ticket inspector’s punch) attached to it. Competitors punch their control cards to show that they have visited that checkpoint.

The navigation is the fun part of orienteering – although not always necessary, you can use a compass, and you’ll find that as you look at the map, there are different ways of finding the next control. Do you take the path the long way around, or go directly across country? Do you cut through the piece of thick green forest, or run the long way around the open forest? Comparing routes with other orienteers afterwards is the best way of improving your navigation, and a good way to get to know other orienteers.

Because most events have courses to suit beginners and juniors, Orienteering can be undertaken by all ages and abilities. Parents can accompany children under the age of about 8, but after that age will find courses that they can compete in on their own. Groups of walkers are often seen on Orienteering courses, while the winners will usually be strong runners who can cover up to 15km across rough forest and open mountain in one course.

What do I need?

To start all you need is outdoor wear you wouldn’t mind getting dirty (e.g. old runners, tracksuit, walking boots etc). Maps generally cost about €5, and a novice course should take a novice about one hour to complete.

Where do I find out more?

There is an informative website (www.orienteering.ie) which gives listings of all upcoming fixtures. You can also send an email with any general questions to info@orienteering.ie. The easiest way is to turn up to an event on the fixtures list – when you get there, there are organisers on hand to help out with novice orienteers. 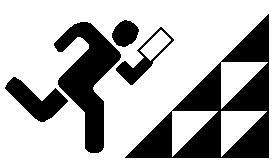