Has our winter come and gone? It’s beginning to look like it. Rambling over Bray Head last Friday morning, I heard larks singing for the first time this year: a non-stop, joyful outpouring, bidding farewell to winter and heralding the arrival of spring.

Encouraged by this, Herbert, Liam and myself piled into the car at break of dawn on Saturday and set out for the sunny southeast – Hook Head in Wexford, to be precise. We were going to climb on limestone, no less. A rare commodity along our east coast.

The climbs on Hook Head could be likened, perhaps, to a donkey’s gallop – short, but sweet. However, their brevity is more than compensated for by the quality of the squeaky-clean, rough-textured rock, the wonderful setting and the pleasant aspect. There are no access problems, as the Wexford Way runs along the top of the cliffs and an enjoyable stroll of five to fifteen minutes covers the whole stretch.

The tip of Hook Head is composed of shallow, horizontal beds of limestone, layed one on top of the other. Think of a sliced pan loaf standing on its end and you’ll get the picture. In between each slice of the loaf is a thin layer of softer, sedimentary material, rather like a slice of cheese between two slices of bread. The constant pounding of the sea has washed away the soft filling, leaving the lip of each limestone layer protruding helpfully. The horizontal gaps between the layers provided good placements for gear and, in particular, a couple of large, meaty friends proved very comforting ( we are, of course, referring to camming devices here). The end result is a rock ladder, enabling the steepest of walls, and even small overhangs, to be climbed with confidence. Entirely suitable for the over-the-hill brigade. To add to our enjoyment, we even found a section of slab towards the end of the day, and it provided an opportunity to play an exciting game of tip-and-tig with an incoming, boisterous tide.

We had planned our visit carefully, to coincide with sunshine, low tides and a lack of southerly winds (the climbs are all on the south-facing side of the Head). But there is always the X factor. Although Saturday was a pet day, storm-force winds all through Thursday had left the sea in a restless, turbulent state, and many of the biggest, most attractive looking buttresses were being washed by a lively swell, and the high splash zone placed them out of bounds on the day. But we had scratched the surface, were pleased with what we found, and will be back to scratch some more.

We had our lunch break in a little grianan: snug, sunny and sheltered. Mindful of the necessity to keep up the strength of the troops, I fed them generous helpings of dark, rich, plum-pudding, a gift from Sile, and all the sweeter for being out of season. As we dined, a plump bumble-bee joined us, attracted by the sunny setting and the bright colours of our gear. Watching it flit from place to place it struck me that it was a fitting mascot for our day.

The delights of visiting a new area; of tackling the untackled; of writing your own script; choosing your own puzzle and seeing if you have the guile and the gumption to unlock its secrets; of climbing in beautiful surroundings, with the constant symphony of the sea playing in the background – all of this combined to provide a continuous, satisfying buzz.

I can remember a time when Blue Tooth was what you got from eating blackberries and a Blackberry was something that grew on brambles; when mobile phones were fat and user manuals slim; when parents had to teach their chislers the difference between the big hand and the little hand on the clock, whereas now, parents sit, bewildered, while the kids try, with great patience and little success, to introduce them to the mysterious workings of the digital watch (by the time I have figured out how to adjust the time forward an hour for summer time, it’s almost time to adjust the bloody thing back again for the winter). It’s a fast moving world out there. If you, too, are sometimes unsure whether you should be uploading or downloading; can’t tell a HTTP from a HTML and don’t know your URL from your elbow – welcome to the club. I’m not the greatest with the latest, or the brightest spark with gadgets and gizmos (I still tend to regard camming devices with suspicion), so it should come as no surprise to learn that I have never been able to unravel the intricacies of uploading photos to our web-site gallery.

So when Tony introduced a new format on the forum recently, allowing for a mixture of photos and text, it seemed like a good idea – a sort of collection of picture postcards, recording some of a day’s, or weekend’s, activities. I watched with interest to see who would be the first to pick up the ball and run with it, but I’ve grown tired of waiting, and I need something to keep my mind off the lousy weather – so here goes. They say that one picture is worth a thousand words and, while the following may not be picture-perfect (most of the shots were taken against the sun),it might encourage others, better equipped, to post their exploits on our web-site. The pictures do give some idea of the ambience and situations we encountered on our one and only visit to Hook Head, in Wexford, last February. You remember February, of course: that was when the sun was always shining; the skies always blue; the rock as dry as snuff and the farmers praying for rain…

The climbs are on clean, sound rock, and though short are satisfyingly steep 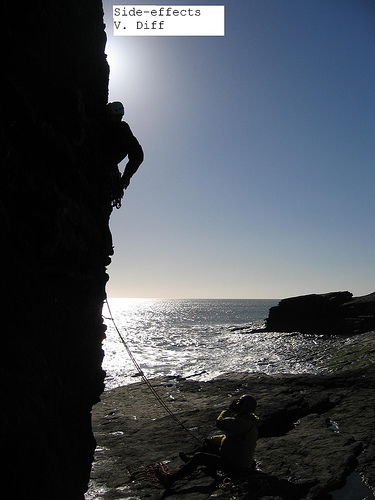 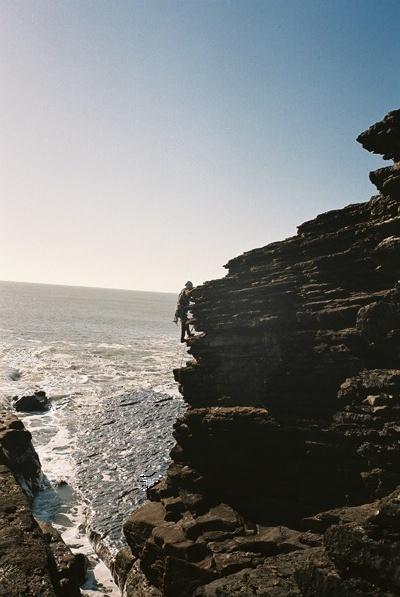 On a day full of serendipity, everything we tried turned out to be considerably easier than it looked, thus creating the welcome, and all too rare illusion that we three were in top form, climbing like demons, no less. Of course, one doesn’t spout about such things.

Towards evening we located an area of slabs which provided a contrast in climbing technique, and an opportunity to relax a little, before an incoming tide put a halt to our gallop.

The rock is limestone, but there the similarity with the Burren ends. This is a more modest playground, and though there are undoubtedly harder routes to be found than those we did, most of the lines will probably be in the lower grades. The cliffs are tidal, so arranging your arrival two or three hours before low tide would make sense. The climbs face south, and should be avoided when southerly winds are blowing.

The area’s proximity to Dublin, coupled with good roads, make it very feasible for a day trip (after our outing we put considerable pressure on the NRA, with the result that the Gorey by-pass was opened four months ahead of schedule: can’t ask for better than that).

Access couldn’t be more straightforward: drive down the peninsula to the car park at the end of the road, just beyond the lighthouse (they do tea, curranty cake and guided tours). 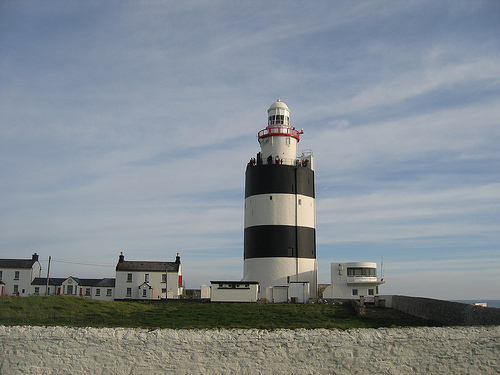 Follow the path around the rear of the lighthouse (the Wexford Way) to reach the edge of the cliffs and you have about half-a-kilometer of seacliffs to choose from.

Now, if only everything in life were this simple and straightforward!