(by Gerry Moss, October 2010)
We struck it lucky this time, with some glorious weather and, with almost a score of members on the meet, the good times were grasped with enthusiasm.

Always blessed with a keen sense of self-preservation, I had the good fortune to find myself under the care of Margaret and Martina and was looked after right royally for the weekend. In return I introduced them to some of my favourite outings in Snowdonia. We travelled over on the early boat on Friday morning, and with rain promised for the afternoon, what better plan than to climb on the seacliffs of Gogarth, only minutes from the Holyhead ferry terminal. And what better introduction to the famed Gogarth Grip than The Dream of White Horses? 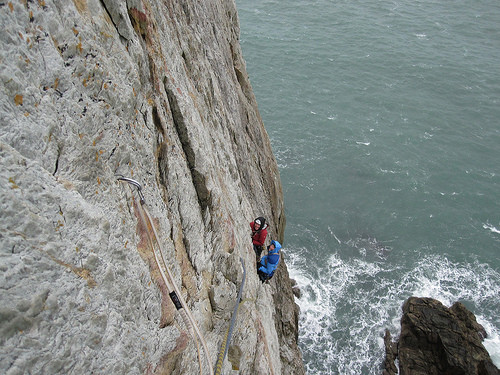 As we progressed across the route the winds steadily increased and there were a fair few white horses on show. While belaying on the first pitch we heard a shout from above and Padraig and Alan came to join in the fun. By the time I launched out on the last pitch the wind was playing havoc with the ropes and they were jumping all over the place like whirling dervishes. The rain had arrived too, first in short bursts, then heavy and more prolonged, adding a little frisson of excitement to proceedings, with Alan finishing the route in a downpour. 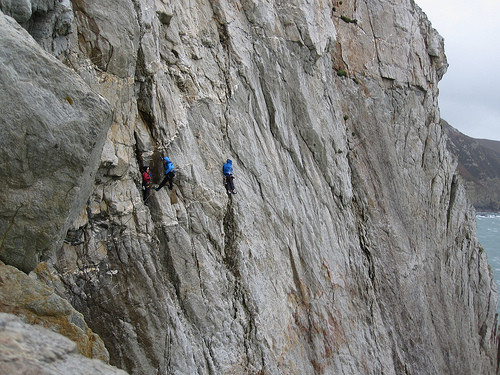 But all’s well that ends well.

The scene at Tremadog the next day was entirely different, with blue skies, sunshine and a strong IMC contingent. 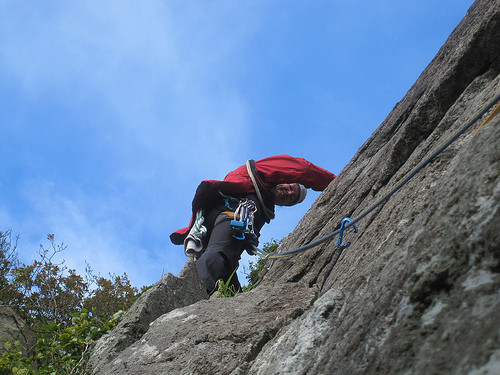 This time the girls did all the work at the sharp end while I followed at leisure. A rake of routes was produced, with Poor Man’s Peuterey, Christmas Curry, Grim Wall, Striptease, One Step in the Clouds and The Plum being just some of the lines tackled.

Sunday was another good day, pleasantly warm in the sunshine, though decidely cooler in the shade. It was an ideal day for being out and about, and everyone took full advantage of the conditions. We three headed for the early morning sun on Tryfan’s East face, choosing the marvellous outing of Grooved Arete to lead us to the summit via eight pitches on rock that was dry and clean, albeit a little polished at times. Although early at the carpark below the mountain, we were dismayed to see the line of people winding their way up the track ahead of us. Luckily, they were all headed for the North East ridge and we were pleasantly surprised to be the first to arrive at the start of the climb. 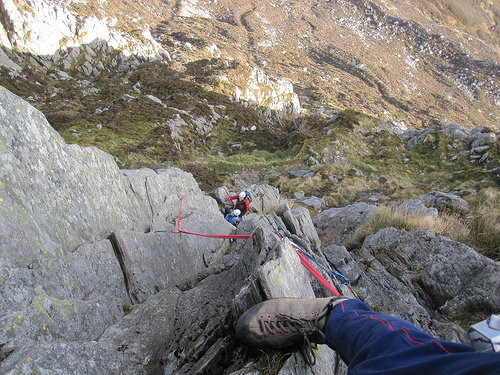 High up on the route we lost the sun and entered the shade, … 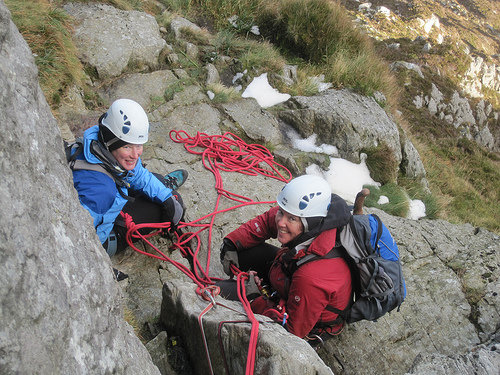 … where temperatures were a good deal lower, but the weather remained fine and the summit, when reached, was in glorious sunshine. 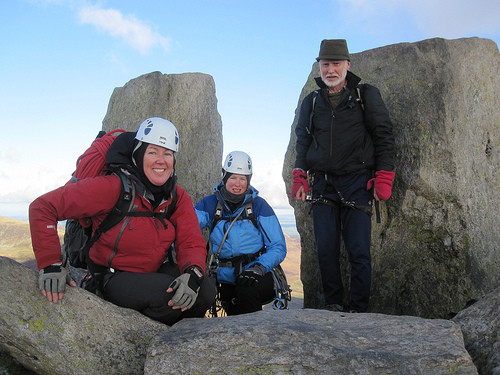 After the traditional, death-defying leap across the awesome gap between Adam and Eve, we scrambled back down the NorthEast ridge to bring a great mountain day to a close. 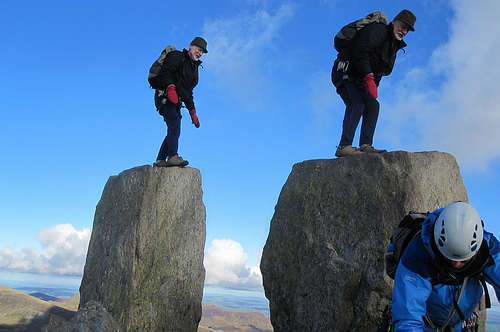 Meanwhile, as we were on the sunny side of Tryfan, Donal, Eric, Joe and Peter were on the cooler Sub-Cneifon Rib, another mountain route, on Glyder Fawr, while Alan and Padraig were on the even colder long route of Slanting Buttress on Lliwedd’s north face. Across from us as we climbed, we had a fine view of the sunny Carneddau summits, where Debbie and Solvig were stepping it out. Not to be outdone, Aileen and Allister climbed Snowdon via the airy Crib Goch, while Eoin explored the region closer to the hut. Kieran, Declan, Tim, Rob and Terrance opted for climbing further south, on the sunny Moelwyns, where the routes climbed included Slack, Slick, Pinkie and Kirkus Direct.

Monday brought even better weather, with unbroken sunshine, and from the South Stack carpark on Holyhead mountain the Wicklow mountains could be clearly seen on the horizon. In typical IMC fashion, we were returning home on several different sailings, so while some opted for climbing on Holyhead Mountain or Gogarth, more were active on Braich Ty Du and others managed a bit of shopping for gear before catching the early boat. 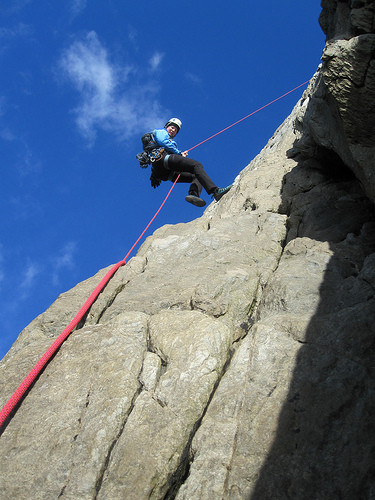 We rounded off a great weekend with a pleasant and atmospheric climb up Lighthouse Arete on the Castell Helen seacliffs. Only a ten minute drive from the boat terminal and a three minute walk-in, this is ideal for a short day. 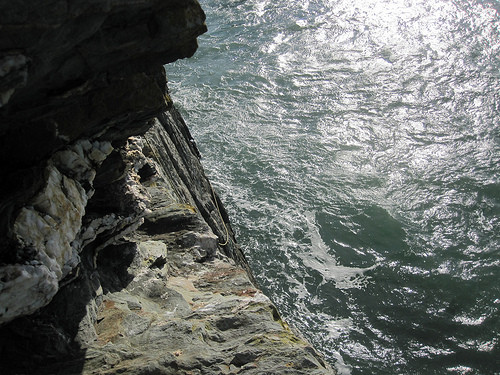 A committing 60m abseil down to the water’s edge is followed by some delightful climbing back up the cliff to the ab point. 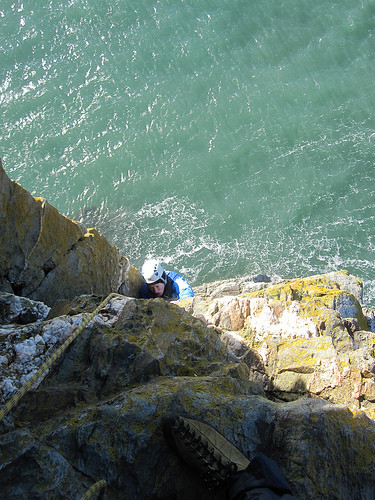 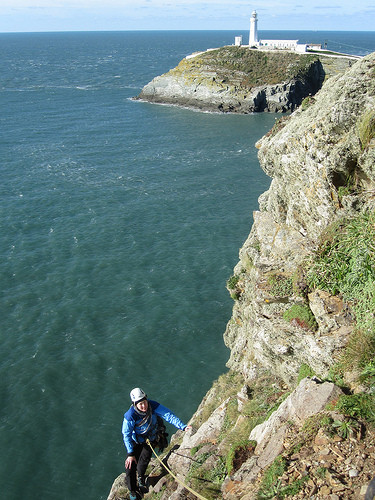 We were based in Ty Powdwr, the Karabiner Mountaineering Club’s hut, just above Llanberis, for the weekend. Commodious, clean and comfortable, its proximity to the mountains makes it an ideal base and it was a big hit with our members. Our thanks to them for allowing us the use of this fine hut.