Well, it was a great weekend. Liam, Michael and I headed over on Thursday morning to make the most of the weather. We went straight from the boat to the Gwynant Valley to get some routes done. A beautiful, quiet spot, overlooking the lake and on the edge of an oakwood, the details of these crags are tucked away in the back of the definitive Tremadog guide. We climbed until fading light brought proceedings to a halt. The caves and cracks hereabouts are home to families of tawny owls and, as we picked our way back along the little leaf-strewn path in semi-darkness, the owls shepherded us on our way, calling to each other as we rounded the lake and crossed the footbridge. An atmospheric ending to a lovely afternoon. 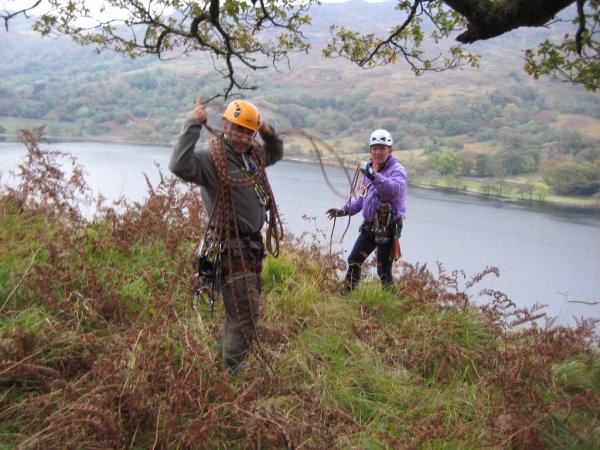 On Friday we climbed in the Llanberis Pass, which was as dry as I have seen it for many a year. We were heading for Clogwyn y Grochan but, as we drove up the road past Craig Ddu we could see it was drier than I ever remembered it. Never having climbed on this crag before, we took a closer look, found two dry lines, each of them giving two good pitches, and despatched them with gusto. Then it was down to Pete’s Eats for some grub and back to the hut to get the fire going to welcome the arrival of the rest of the gang. 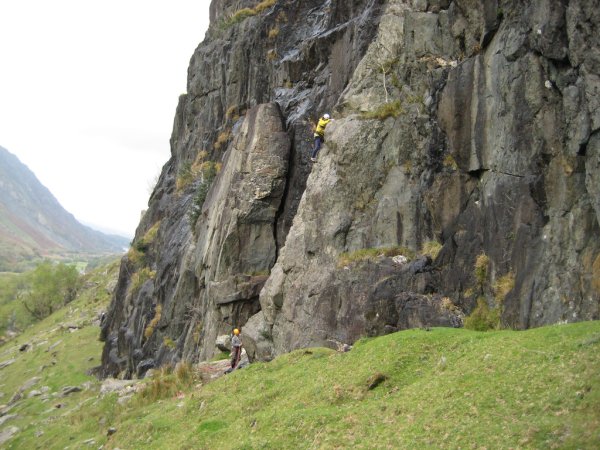 And what a gang. We had been allocated 18 places and we had a full house, with the numbers split fairly evenly between young members and those of a more mature disposition, the common factor being enthusiasm and a determination to get the best out of the weekend. I must say I was very heartened by the get-up-and-go attitude of the younger set. Not the sort to be daunted by the threat of a drop of rain, or reluctant to get some dirt beneath their fingernails. We were away early on the Saturday morning, some heading down south to Cader Idris, most heading for Tremadog. We bade Eric the top of the morning and took to the rock. When the rain finally came some of us were already on the way down, while others topped out in wind and drizzle. Then it was off to spend a few bob on renewing old, worn and torn gear.

The hut, owned by the Gloucestershire Mountaineering Club, was very snug and comfortable, with a good kitchen, a very efficient drying room, and a good supply of coal for the fire in the commonroom. We gathered around the fire in the evenings, swapping yarns and experiences, plotting the outings for the following day.

It rained cats and dogs all Saturday night, but the forecast was for a clearance on Sunday morning, so we were away bright and early, some heading for the Snowdon Horseshoe, but most driving south to meet the clearance, heading for the mountain crags of the Moelwyns. We drove past livestock stranded in flooded fields, with every hollow on the roads awash with water, and every hillside bedecked with white ribbons as the streams dashed downwards to the valleys. One of the climbs we had done on Craig Ddu was now home to a raging torrent and it was difficult to believe it had been bone-dry the day before. The rain had cleared by the time we reached the carpark and we were greeted by broken cloud and brief spells of sunshine as we walked up the track to the crags. Our early start had paid dividends, as we were the first group to arrive, to be followed, shortly afterwards, by a large group of Uni students. The rock dried quickly in the sunshine as we spread out all over the crags, and a number of routes were climbed, each rope of two or three acting independently

There wasn’t even a threat of rain on Monday morning, though we were so busy no one would have noticed anyhow. By half-past-eight (IMC time) we were rolling down the road, with the hut scrubbed from top to bottom. Holyhead Mountain was our destination, and once more it was a case of every team choosing their own line, as the sun shone and the balmy breezes blew. It was only the sight of the HSS steaming into Holyhead harbour that finally convinced the more enthusiastic ones that it was time to pack up and go 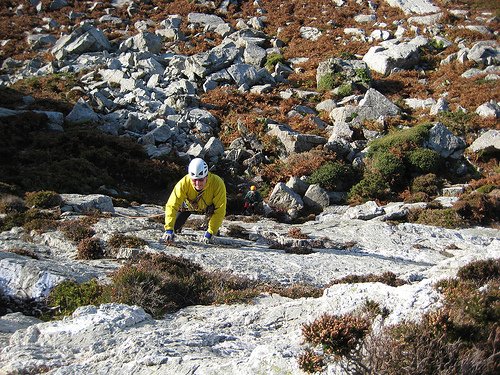 We were able to get the maximum out of the weekend because there exists, within the club, a fund of knowledge on local conditions. This store has been built up over decades of October meets to the area, and its existence is due, in no small way, to the efforts of Des Doyle, who ran this meet for twenty years, through good and lean years, in all weathers. We can all benefit from this treasure trove, not only drawing from it, but adding to it too.

So, five days in Wales, five days on the rock, five days without having to don the rainwear, and not a mention of the dreaded Lockwood’s Chimney. It couldn’t have happened in the summer just gone by. Like I keep telling yiz, the October meet to Wales is your only man.