The Burren is situated on the West coast of Ireland. What I would describe as one of the most beautiful parts of Ireland. Most of the climbing is on well-formed limestone. There are various places to climb with a huge diversity of grades.

A group of us went to The Burren this year at Easter. We were very lucky with the weather; the sun was splitting the rock most of the time. Most of us travelled down on Thursday so as to get a full day’s climbing on Friday. We stayed the Boghill Hostel just outside Lisdoonvarna.

On Friday we set off for Ballyryan, which is, situated inland. For people who want a nice challenging climb, Elvis Who? (HVS) is a good climb. On Saturday we were heading out to the coast to go to Dancing Ledges, but it started to rain. So we thought it might be drier inland. Luckily by the time we got to the Aillwee Cave the rock was dry enough to climb. The fact that a few of the climbs have Skull in their name made me wonder a bit, but I think everybody really enjoyed the climbing here. Martina and Dairín even set up a few climbs on the upper back walls! 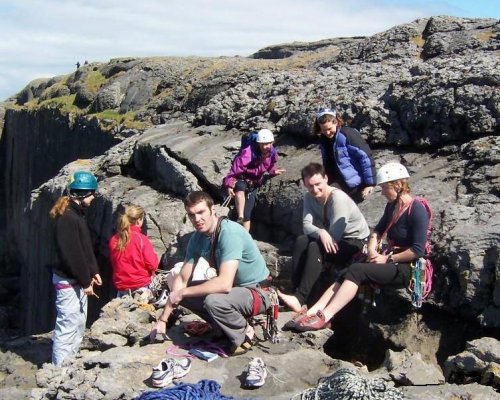 We had to go to the pub that night to make up for the fact that it was Good Friday the night before! Some of us really did make up for it! On Sunday after hardly any sleep and a few headaches going around we headed to Dancing Ledges on the sea front. For some reason I didn’t fancy leading that day! But I really enjoyed seconding climbs like Genesis and Ground Control. 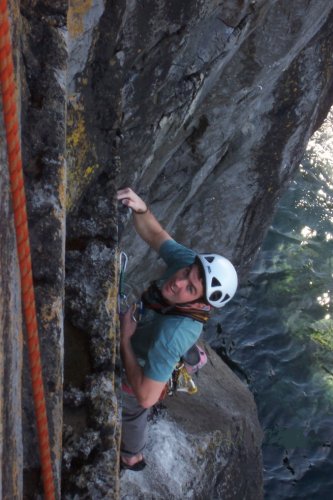 We woke up on Monday expecting it to be raining, however it was another beautiful day! We managed to get a few climbs in before heading home. I seconded Roger on Jug City. This was the highlight of my weekend. It was also the first time I had to abseil down to a climb that started just above the crashing waves! It was a bit unnerving at first but once I got down there it was cool! I really enjoyed the climb.

All in all I think everyone had a good weekend. Whether it was climbing or drinking! I would recommend The Burren to everyone from beginners setting up top ropes to people leading E’s.