(by Dermot Shiels, from IMC Newsletter Autumn 2010)
A lightweight ascent of one of the Alps’ Great North Faces.

Like many climbing plans the idea for this one was spawned at the climbing wall one rainy evening. Neil Wilson and I had discussed different alpine routes in the past and had our own wish lists but we shared a craving to climb the Cassin route. I could only get away for a few days and Neil was moving to Haiti to work for a few months at the end of the summer. So we started the preparations …

The Cassin Route takes a more-or-less straight line up the centre of The North East face of the Piz Badile. It is one of the walls that Gaston Rébuffat dubbed one of the six great north faces of the Alps back in the 1930’s. The epic ascent by Cassin and co and the subsequent horror-story descent when two of his companions died lays testament to the seriousness of the route at that time.

The route has equipped belays now and some fixed gear where it matters so the technical difficulty is now reduced. The use of modern gear, energy gels and up-to-date weather forecasts also make a dramatic difference today. However Cassin’s reputation remains and it makes you sit up and take the undertaking seriously when you are considering having a go or when you are standing at the base of it looking up! 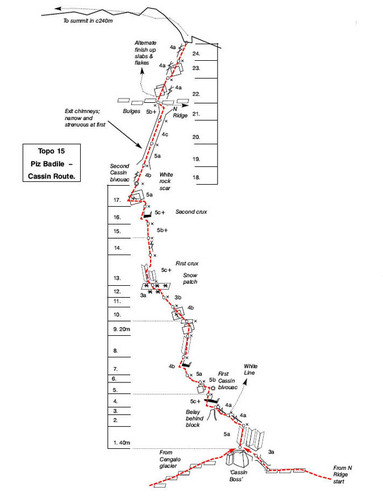 One of our topos

To prepare ourselves we read numerous climbing reports from other climbers. We studied the gear they used, the clothes they wore, the food they ate and the topos they used. We found three independent topos of the route with subtle differences and studied them in depth before we left for the climb. We decided to travel as light as we could so as to climb faster. But we expected there was a fair chance we would be forced to bivi on the route or on the descent down the North Ridge. Due to our time constraints there would be no warm-up route, just the Cassin, so we had to be organised.

We flew to Milan on the red-eye flight from Dublin and drove our rental car north along the shores of Lake Como to get to the Swiss village of Bondo. This is at the foot of the Piz Badile in the Bregaglia mountains. Luckily you can drive from Bondo to an upper car park reducing the walk-in time to the Sasc Fura hut to under two hours up a nice shaded forest track.

As we stepped out of the car to shoulder our bags we caught our first glimpse of the North Ridge and the twin North faces of the Badile. Simply put, we were awe-struck. It is a striking mountain and the gravity of what faced us landed in the pit of our stomachs. How are we going to climb that? 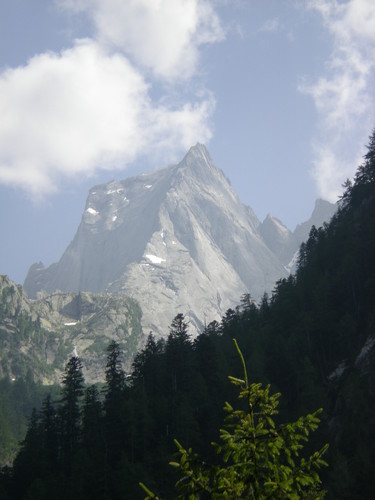 The climb is a rock route in summer months with three of the 25 pitches at about 5c+. Climbers traditionally carry their own gear alpine-style with a small bag each. Therefore we gambled on using approach shoes and left our heavy mountain boots and ice climbing gear behind to save weight.

We were climbing the route early in the season and consequently there were no footprints to follow on the initial snowfield. This must be traversed to get established in the middle of the North-East Face. We spent a lot of time creeping across this snowfield in our approach shoes kicking steps and balancing with a home-made walking stick I found at the foot of the North Ridge. 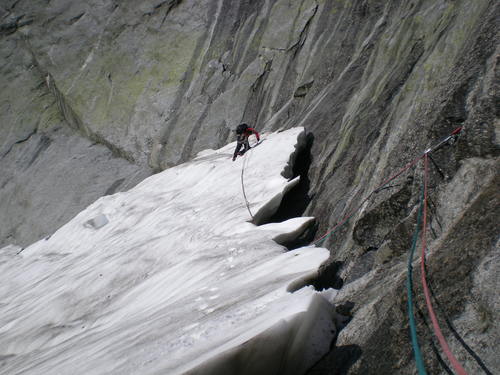 Dermot on the first snowfield

There was a 50m run-out from belay to belay on the snowfield so we had no regrets taking our time, as it would be a bad idea to rush across without crampons and axes.

We had read of an unfortunate accident at this spot in recent years which played on our minds. And to top it off the German frau warden in the hut told us the night before that it was impossible without ice gear and not to do it under any circumstance. This resulted in a sleepless night wrestling with our inner demons and making the tension more intense at that crucial part of the route. But we committed and found a way across, the tension eased away and the fun began.

There was nobody else climbing that day so we had the entire North-East Face to ourselves. This made the experience all the richer. It was great to be alone with your thoughts as you climbed the best quality granite cracks and slabs and then to sit on the belay ledges soaking up the exposure above, below and all around us. The face is the biggest either of us had climbed so far, 800m of vertical climbing once you are established beyond the snow fields. 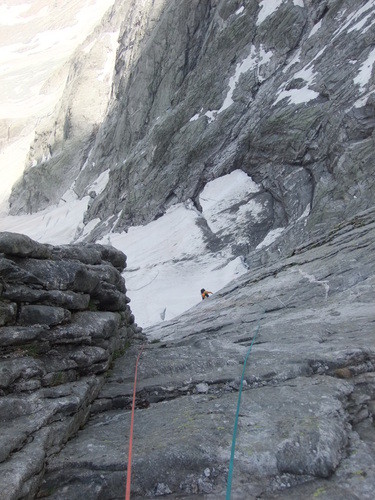 Half-way up the face

We thoroughly enjoyed the climbing and the weather was great until we were about two-thirds of the way up. Just as Neil reached the hanging belay under the second crux the thunder clouds rolled in and the skies opened up. I scurried up after him and we set about getting our bivi bags out. Neil was hanging on three or four pitons and I was on two camalots. The rain was pouring down the face in a waterfall off the overhang above us making things a bit more interesting. We juggled our gear about, clipping everything onto the belay and bumped into each other as we pulled up the bivi bags to escape the deluge.

The rain lasted about two hours I think, but after that a few rays of sun made it through a gap in the clouds and lifted our spirits. We quickly packed up and I aided up the crux corner as it was dripping wet. Then Neil led through up a long difficult slab pitch to get us into the exit chimneys.

Completely dehydrated he helped himself to a pool of rainwater conveniently located at his head level, no hands, he just dropped his face in and sucked it up (standards were dropping!). I climbed through into the exit chimneys where we found a good ledge to call home for the night and we settled in. 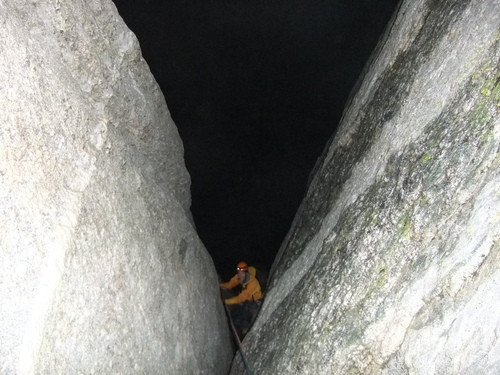 Bed time in the exit chimneys 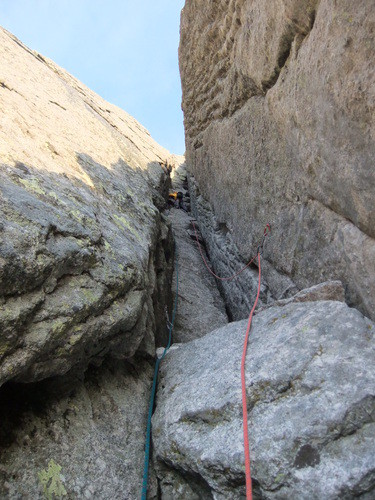 Morning in the exit chimneys

The following morning brought clear skies and a welcome sun. We set off early up the last two pitches of the chimney, which had a little ice in places. Then we made our way across to the slabs that bring you to the summit ridge, baked in the morning sunshine. We relaxed for a short while in a notch in the ridge peering into the other valleys and back down the face, two specks on the top of the Black Dwarf. Mindful of the long descent that awaited us we couldn’t hang around for long. 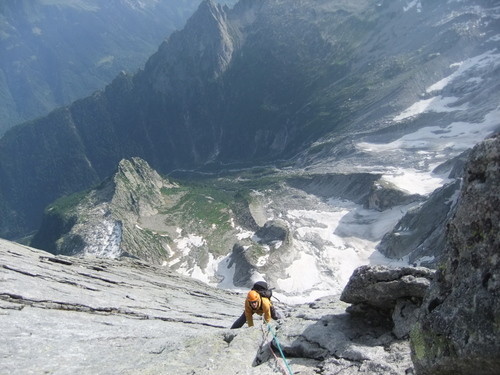 Neil near the summit ridge

The clouds built up again at times but luckily there was no more rain. So the twenty abseils down the magnificent North Ridge went without any trouble. We made it down to the hut with big appetites and a warm welcome back from the wardens, even a wink from the Fräulein! The quality of the climbing, the exposure, the feeling of remoteness, the company, the history, the hut … it was brilliant. 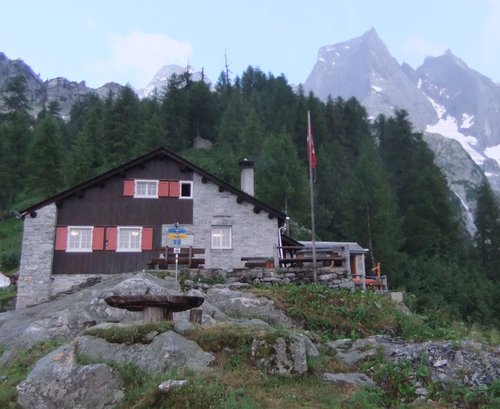 Gear we used: light rain jackets, two pairs of gloves each, hats, balaclavas, dryflow tops, 1 light fleece each, light weight bivi bags, down jackets, head torches,  6 energy gels each, 3 litres of water each, a couple of bars of chocolate, 1 set of wires, 5 or 6 friends, 10 lightweight extenders, slings and locking crabs. We left behind rainproof leggings, sleeping bags and ice climbing gear to cut down on weight.