(by Stephen R Young, 2007)
"Having spent 14 days at Glendasan, my own cooking was beginning to get the better of me …"

Having spent 14 days at Glendasan, my own cooking was beginning to get the better of me or rather the better of Brendan’s Elsans (our temporary warden, remember Dave was away Trolletteing); I decided to eat out. 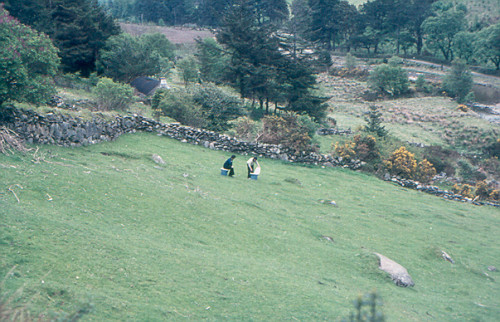 Down in sunny Woodenbridge, by sheer chance, I ran into my old mate A40 Pedro, he runs a kind of Great Pissific Ironworks, he doesn’t make rurps, just gates and similar artistic ironware. 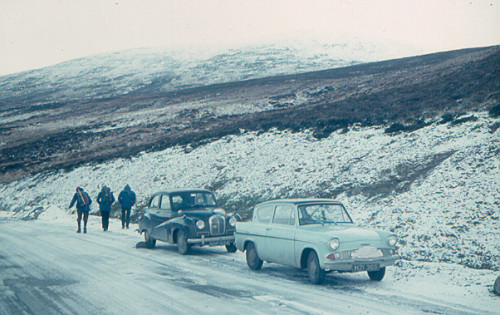 After a few jars, I was persuaded to eat later, an urgent visit to the coast was necessary, for what reason, I was never to find out!

At the Bay, the home of “Blondie and the big black one” (but that’s another story), a real tourist hotel, full of happy holiday “Brits”, Pedro ordered his umpteenth Crème de Menthe and started chatting to a fellow bar support. His newfound friend was tallish, blondish and I was soon called over to meet Leoni, a great “hairy Dane”, who was “in the air”.

By now it was the umpteenth-plus-some Crème de Menthe and Leoni started.

“I ‘av a fourteen feet (surely it should have been in meters) chromium plated cannon from which I am fired. I fold myself into a foetal position in the barrel and the gun is banged (what separated him from the powder I was never to find out). After fourteen feet, I am blacked out and travelling at 120 mph (or was it km/hr). At my apogee (top of the flight path, it’s great to have egg-headed friends) I un-blackout-in, outstretch my arms, clasp my thumbs together. (like a butterfly silhouette on the club film screen courtesy of Mike Daly) By waggling my hands, I loop the loop to land backwards into the safety net. Who said it was dangerous?”

“Well, Leoni, how often do you fly, do you get paid, do you train?”

“Oh, oh, yes, I get two thousand pounds (this is an old story) for a four second flight. Before a flight, I keep off the booze for seven days, never mind the nights, it helps in the un-blackout-in routine. I last flew, two years ago, you see, I’m in Ireland convalescing, On my last flight, dressed in my helmet and leathers (like a 1930 TT rider), I failed to land backwards and went through the net with my arms outstretched” – yes at 120 mph!

With Leoni’s phone number written on my cheque book in case I ever wanted to hire him for some spectacular event, Pedro and I set off back to the Avoca for our meal, a two-A40 convoy!

By some miracle, we found the Vale View and by sheer chance, Pedro meets his long lost cousin Ivor and his wife in the jacks (Ivor, not the wife).

The meal eaten and multiple bottles of Faisca (a fruity, sparkling rosé wine from Portugal) consumed, Ivor and the wife left for the airport, no cannon for them, they were to fly to England! 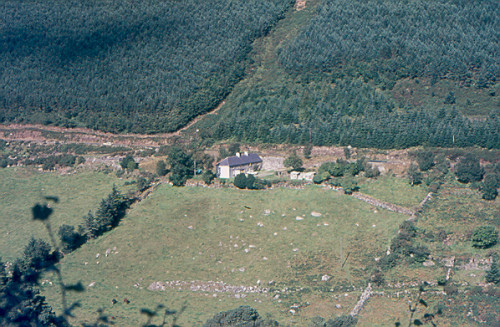 Back in convoy, we headed north, Pedro turned west at Rathdrum for the mountains and I continued along the windy, switchback road through Clara, passed the “keyhole doored barn” to Laragh and then along the Hollywood road to the IMC hut, my home for the summer. Violet had thrown me out of the Redcross farmhouse for the more lucrative summer holiday trade. After all, I was just a “winter lodger”.

Somehow, I reached the hut to find the keys would not open the “cow house” door. Had Barry changed the locks? The upstairs window was open, I found an old short ladder but, boy, is it hard to climb a stepless ladder when pissed. Well, to cut a long ladder short, I left the story and climbed into the cowhouse top window only to become stuck like a “Faisca cork”. I struggled, I was impaled on the window opener spike, the ladder fell over and I was left “in the air”. Just as I was thinking I was going to have to wait four days for Brendan to come to the hut and open it for the weekend, two motor cyclists, Leo and Gerard arrived, saw my predicament, re-positioned the ladder and pushed me in through the window, I slept where I landed. 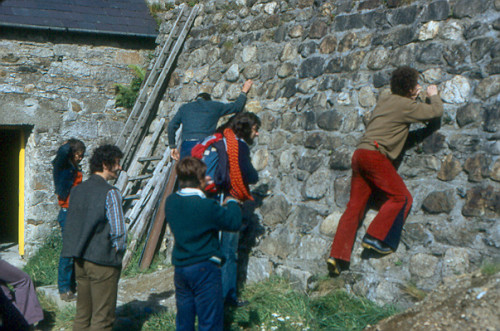 The moral of this tale is to keep two feet firmly on the ground but if perchance you get in the air, clasp your thumbs and fall backwards into your troll net (or I guess now your bouldering mat) or forwards into the arms of your trollette – Dave! 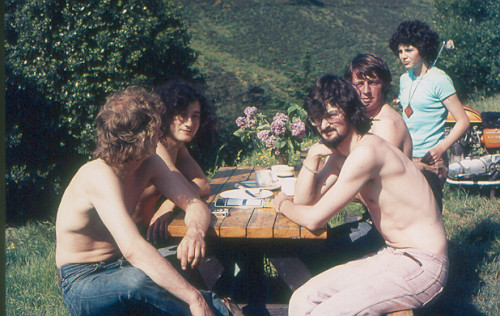 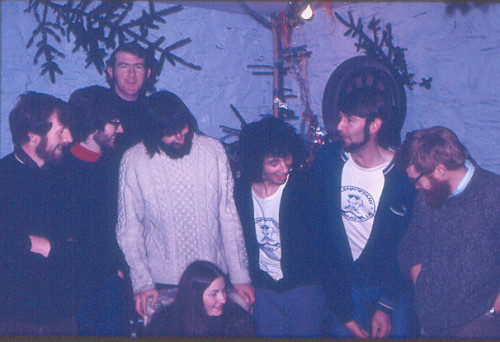