(from the IMC Newsletter Autumn 2001)
Climbing and craic at the 2001 MCI alpine meet.

The camp site in Vicosoprano is billed by the Swiss Tourist Board as a quiet, scenic place, ideal for family sojourns in the cool mountain air…. This year’s meet, while not being exactly raucous every night, did shake things up a bit, leaving the more restrained Europeans wondering how the usually precise Swiss got it so wrong.

An impressive array of late night challenges took place; such as the ‘walk holding a coin between your buttocks and drop it into a small cup’, the ‘pick up a coin off the ground with your teeth with only one hand and one foot touching the ground’ and the classic ‘how close can you come to alcohol poisoning without having your stomach pumped’. An act of immense bravery and testosterone was performed by one participant who calmly consumed a cricket and a slug much to the disgust and delight of spectators. Even more amusing was the posse of headtorch-wearing huntsmen who beat the grasses in search of the sacrificial bugs. I also witnessed a striptease which was surprisingly good despite the awful vocal accompaniment. Unfortunately for the talented stripper it ended in a painful-looking wedgey – some audiences are just so hard to please.

Fireworks, being legal to the sensible Swiss and a great novelty to us Irish, were a feature of most nights in varying degrees. Budding pyrotechnics had to compete with a backdrop of lightning and thunder and they also had to overcome the immutable rain. Taking these factors into account, there were some pretty good displays and perhaps the late-night noise helped clean any potential avalanches off the slopes for early morning climbers.

Water was a major issue at this year’s meet particularly in the first week It bucketed incessantly. If it wasn’t raining it was precipitating in some other way and on some days it rained so hard you got wet twice; once as the rain fell down and for the second time as it bounced off the ground.  Not great climbing conditions but the crickets thrived, proving there’s a silver lining in every thunderstorm; you just have to be the right species to benefit.

The inordinate amounts of H2O resulted in many climbers retreating from routes. Nonetheless it did little to dampen the spirits of the attending mountaineers. Many classic routes were completed and the extra downtime in the camp site was busily filled with cooking, drinking, eating, drinking, gear checking, drinking and of course the great sport of talking-about-climbing and did I mention drinking?

On the climbing front, recognition must go to Nigel Callender for completing the first traverse of the glacial pond at the bottom of the camp site, an interesting and varied climb, now graded Severe. As the route is no higher than four meters, protection is not necessary, although falling guarantees the unfortunate climber a plunge in a freezing pond and possibly a cheer from the local onlookers.

As with all good climbing experiences there were a few hairy moments. I myself dangled a full leg in the mouth of a crevasse, had a close shave with a falling ice axe and was forced to drop my cacks along with my harness to pee on a minuscule ledge with gliders swooping about overhead (talk about exposure). One team had an unplanned bivouac due to bad visibility on the Bellavista Terraces on route to Piz Bernina. Despite what must have been a very long, very cold night the group arose the following morning, shook themselves off and with better weather conditions continued on, completing the 4,000+ metre peak. Other than that, a few ankles were sprained in minor incidents but thankfully no participant received a genuine Darwin award.

Good reports were received of the alpine and rock climbing courses. Perhaps I will go on one next year, it would be useful to know some proper crevasse rescue should the rest of my body follow that leg. Until then I’ll just stick to the ultimate adrenalin sport of discussing great climbing and maybe even some buttock tiddly-winks.

A big huge thanks must go to the organisers Robbie Fenlon and all at the MCI office for the behind-the-scenes work that goes into the event. Personally, I completed some great mountains, backed off some great mountains and met some inspiring people. I thoroughly enjoyed the beauty of the area, the varied routes it offered and in no small way, the camp site craic. 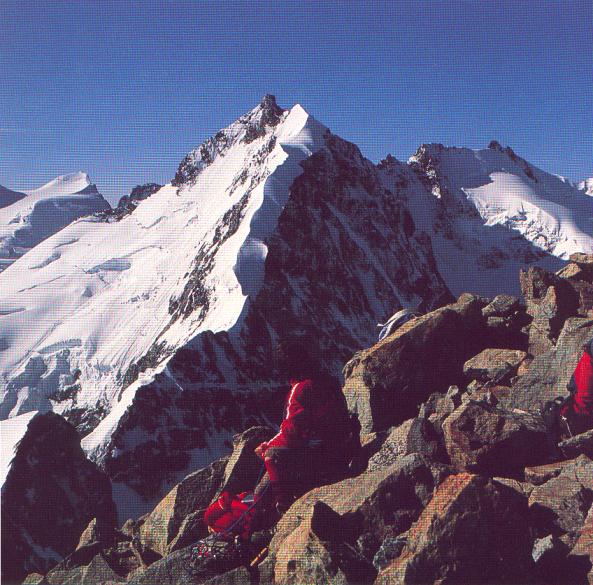 The North Ridge of the Piz Bernina, 4,049m
(minus the rain!)
Designed By HowlThemes
Back To Top