(by Paul Donnelly, from IMC Newsletter Winter 2003)
A review of Walter Bonatti’s book. 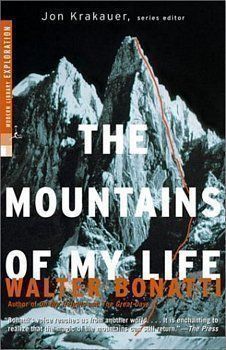 This is a book of two halves – possibly two books in one. The bulk of the book is a new English translation by Robert Marshal of selected highlights from Bonatti’s mountain publications and covers all his major ascents chronologically. The second half of the Mountains of my Life deals extensively with the controversy arising out of Bonatti’s role in the successful Italian first ascent of K2 in 1954. Of the book’s 400 pages just 25% is given to the K2 issue.

Walter Bonatti is regarded by many as the greatest mountaineer of his time. Yet his extreme climbing career was quite short and dogged by controversy. He retired from top level climbing in 1965 (the Matterhorn Centenary year) with his great first solo ascent of the North Face of the Matterhorn in winter.

Born in 1930 in Bergamo in fascist Italy, Bonatti’s career spanned the period 1948-65 (17 dynamic years). He was during this period Europe’s leading alpinist with numerous breakthrough first ascents – quite a few of them solo ascents.

From 1965 to 1980 Bonatti indulged his passion for outdoor adventure as a photojournalist. He is now in active retirement in Italy – a respected figure in mountaineering circles.

Bonatti’s Greatest Climbs: As noted the first half of this book is a selection in a new English translation of Bonatti’s previously published climbing writing and includes his description of all his major climbs (and epic failures) in chronological order. Two of Bonatti’s published books – On the Heights and The Great Days – had earlier been published in English. However the translations were not satisfactory and at times even conveyed the opposite of what Bonatti had written. As a result he had refused proposals to publish English translations of later books and this was the situation until he developed a close friendship with Robert Marshall (who worked with him on clearing his name) and enthusiastically endorsed the present book.

Bonatti, like many outstanding figures, is a man of strong character and opinions. For him the approach and spirit in which he achieved his climbs had equal importance with getting up the climb. The personal battle and an ethical approach were for him essential. He notes sadly in the book that many leading climbers did not share his ethical approach. In keeping with his views he proposed in 1955 (the year after the K2 first ascent in which he participated and of which more anon) climbing K2 solo and without oxygen. Unfortunately this revolutionary proposal was at the time considered ridiculous and he failed to get sponsorship. Had he done so and succeeded he would have anticipated Messner’s feat on Everest by some decades.

It seems clear that Bonatti’s strong personality made him for many a difficult climbing partner and team player. While he may naturally have been something of a loner it is difficult to avoid speculating how far his unfortunate K2 experiences may have contributed to his subsequent personality. He was a young man on K2 – only 23 – and the negative aura that surrounded him after the expedition (at least in Italy – his home) clearly affected him deeply and overshadowed the rest of his career. This book does not deal with this in any detail and we must await a future biography.

In my opinion Bonatti is not in the first rank of climbing writers. As a storyteller he at times seems to rather rush the fences; in addition his descriptive powers are limited. Both defects often combine to leave the reader unsatisfied – the more so because of the quality of the actual adventure being reported. This may be partly a matter of translation but I suspect it is just that Bonatti is not a natural writer and often under severe time pressure. However this book is in my view well worth reading because of the stature of the author, the epic quality of the ascents, and the boldness and courage they required overcome all reservations about writing ability. The author carries us breathlessly in his wake as he conquers one ‘impossible’ route after another. Meanwhile he shares his views about climbing, nature, and the importance of commitment to the challenge. No climber can avoid a degree of failure and Bonatti is no exception. The chapter on the retreat on the Central Pillar of Freney (Mt Blanc) which left 4 dead climbers and Bonatti mired in more controversy is one of the most gripping of the book. At the end of the climbing chapters one is left with an image of Bonatti as perhaps the last knight from the Golden Age of Alpine Mountaineering who left the field after performing a fitting tour de force on the Matterhorn in the centenary year of its first ascent.

The K2 Controversy: The second half of The Mountains of my Life deals extensively with the controversy arising out of Bonatti’s role in the successful Italian first ascent of K2 in 1954 by Compagnoni and Lacadelli. Feted at the time these climbers come out of this book with their reputations considerably diminished. Bonatti, although at 23 the youngest climber on the expedition, had a central role in the successful ascent in that it was he together with Hunza Mahdi who carried the vital oxygen bottles to over 8,000m for the summit attempt. However because the lead climbers had not placed the top camp at the agreed spot and failed to respond to Bonatti’s calls he and Mahdi were caught out by nightfall and were forced to bivouac without a shelter at 8,100m in a storm without food or drink. Miraculously Bonatti escaped unscathed but Mahdi subsequently loss all his fingers and toes. After the expedition returned, despite the headline first ascent, controversy raged in Pakistan about the Italians’ conduct, which led to Mahdi’s horrific injuries. By a cruel twist Bonatti was scapegoated by the expedition leader Ardito Desio and the summiteers and subsequently by the Italian mountaineering establishment; he was blackballed and eventfully forced to abandon his career as a mountain guide in Aosta. For the rest of his active climbing career and right up to the 90’s Bonatti was an isolated figure in Italy steadfastly seeking to clear his name by writing and even by court action. In this he was only partly successful until Robert Marshall (the book’s translator), an unlikely saviour, became involved on his behalf and uncovered key evidence in a 1950’s Swiss mountain magazine. How Marshall, an Australian surgeon with an active interest in mountaineering, became involved is a fascinating story in itself. From his reading he became interested in Bonatti and his exploits and in particular in the K2 controversy and Bonatti’s resulting plight. To pursue the matter he took the trouble to become fluent in Italian and read the relevant published literature. He then made his way to Italy and met Bonatti, subsequently becoming his close friend and collaborator. By careful research and a degree of serendipity he came to vindicate Bonatti’s role on K2. This aspect of the book reads like a gripping “whodonnit?” and is covered by contributions both by Bonatti and Marshall to build an (to me) impressive case for Bonatti’s defence.

At the back of the book is appended a speech by Bonatti in 1989 outlining his philosophy of mountaineering at an International Conference. This is, despite the interesting theme, in my view again marred by Bonatti’s weak communication skills and leaves one rather unsure of what Bonatti’s key concerns and prescriptions are and rather under-motivated in supporting them.

To sum up then, despite some gripes about Bonatti’s writing, this book rewards the reader by giving us an overview of the career of one of the giants in mountaineering – one who stood for the old values of self-reliance, challenge and adventure and stood apart from the seductions of commercialism with its perils of short-cut and hype. As a bonus you get a gripping detective story. Get it if you can. Remember it is available from Dublin libraries!