(by Kieran Kelly, from IMC Newsletter Summer 2003)
Ascents of Tower Ridge and other Scottish winter climbs.

I tend not to sleep too soundly when there is an early start (5am). Two hours check-in before meant we had to be at the airport for 6.15. A strand of advice; do not carry your rope in your hand luggage, put it with the rest of the offending objects like the ice axe, scissors, tooth pick, sewing needle etc. Fifteen kg max in the main pack, 7 in hand luggage (Ryanair), anything over this will cost €6 per kg.

From Prestwick head for Glasgow (29 miles) from there the A82 to Fort William. This was not the most direct route to the accommodation, but we were planning an early start the next morning and needed to check out the start of the planned route. Apart from this we needed to stock up on supplies and a visit to Scotland is never complete without a visit to Nevisport to check out the gear and the weather forecast. The weather for the weekend was to be very good and so it proved.

Back on the A82 as far as Torlundy, turn right then over the humpback bridge then right again for 750M and we arrived at the car park. A chat with a few other people gave an idea of the conditions on the Ben. In order to stretch the legs we walked along the route for a couple of km. The final part of the journey brought us to the Laggen Bridge Bunkhouse, one hour from Fort William. 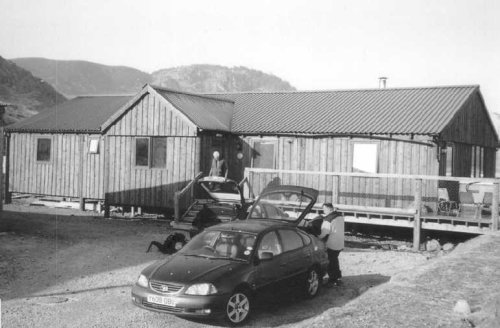 The Bunkhouse, a timber-framed structure, offers good accommodation at reasonable cost (£10 per night). The bedrooms were clean and for a once-off payment of £2 you get a sheet bag and a quilt. They did squeak a little, especially the one above me. Jack and Jill shared it; they must have been on a very tight budget. The kitchen/dining room was well equipped with plenty of utensils. A big pot-bellied stove stood proud in the dining area; the sting in the tail was it required a woodcutter to keep its appetite satisfied.

Another early morning start, rise at 4.30 am. Eileen’s porridge provided central heating to get the day off to a good start. We arrived at the Torlundy car park at 6.15. We were surprised to find some people camping and other sleeping in the back of a van; others were arriving back having spent the night on the hills. At 8.30 we arrived at the CIC hut and from there made our way to the start of the route.

After some nourishment we geared up ready for the off. The guide book recommended moving alpine-style at a steady pace on the lower section. This proved to be sound advice; before long we were at the base of the lower tower. A few belays got us over the lower tower; from there we advanced on to the Great Tower. The biggest distraction was the scenery. It was fantastic in every direction; clear blue skies meant you could see for miles. Having negotiated the Eastern Traverse we ascended to the top of the Great Tower; from there we caught sight of Tower Gap.

Tower Gap could be renamed Gridlock Gap. This is where time can be lost on this route; it cost us 20/30 minutes. Two climbers had come up the gully and had pole position, with more coming up behind. As soon as the group moved, Kevin descended into the gap and from there ascended up the slope on the far side and set up a belay. One more belay and we were there; it had taken 5 hours from start to finish. Elated at our achievement we had a photo-call followed by lunch at the summit.

Our ascent was down No. 4 Gully, which was very steep initially; it is at times like this that a second ice axe would be useful. A short time later we reached the CIC Hut and then retraced our steps down the valley to the forest road where we came across a Tollymore bus. The driver (Brendan Whelan) greeted us. I had known Brendan for some years; he was working in the area as a freelance ML instructor. He offered to drive us to the car park. Kevin refused as he said it would be cheating. We agreed for about two seconds then made a dash for the van.

Two hours walk through the valley brings into view a spectacular sight that gets better with every step. Ice helped to shape Creag Meagaidh (“Crag of the Boggy Place”) and it’s still a big part of its attraction. When snow fills the big gullies and the mountain buttresses glaze with cascades of steep ice, the winter climbs are amongst the best in the country.

Having reached Lochan a’ Choire we split up. I decided to head on up the valley to Uinneog Coire Ardair (The Window); from there a short ascent up a snow slope gained the ridge. A short walk brought me to the summit of Creag Meagaidh (1128m); from there the ridge walk offered panoramic views of the valley.

Nearby Kevin and Eileen had decided on Raeburn’s Gulley, a 360m grade 1*** route. This ice gully is long, continuously steep and the pinnacle buttress face provides exciting scenery.

The walk into “Coire An tSneachda” was an easy walk both in terms of time (40 min.) and the terrain. The plan today was “The Runnel”, a grade 2** ice gully (135m) on the fluted buttress. It is described as the central and best-defined of the three gullies, which rises from the top of the snow bay. It is straightforward climbing leading to a fine ice chimney near the top, which is the crux of the route. 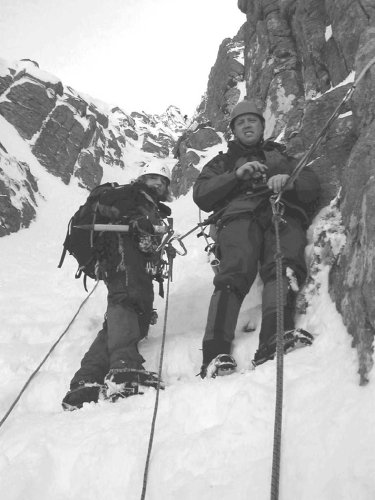 Eileen and Kieran on the first pitch of The Runnel

Day two at the Cairngorms; time would be tight. We had to check into Preswick at 8pm and with four hours drive we had to be on the road by 4pm. Eileen and Kevin had a date back at Coire An tSneachda with “Aladdin’s Mirror Direct”. A popular ice problem, Aladdin’s Mirror Direct (Grade 4) varies in length and steepness according to build-up.

Overall the trip was a great success; four days of continuous sunshine, good accommodation, not to mention the outdoor hot tub. The trip was well organised at a reasonable cost. Last but not least was the good company and teamwork that went towards achieving our objective Tower Ridge.