Yes, to dance beneath the diamond
sky with one hand waving free,
silhouetted by the sea, circled by the circus sands,
With all memory and fate driven deep
beneath the waves –
Let me forget about today until
tomorrow.
Robert Zimmerman

The inspiration of Peter Biven’s article on Sea Mountaineering (Rocksport October 1968) led me on a quest for new climbing areas to the west coast of Ireland. The lure of new rock became overpowering after hearing of tales of the Cliffs of Moher but one look up from the base of these formidable layers of crumbling limestone and shale sent us scurrying to the matchmaking town of Lisdoonvarna where the heaven-made match with the Burren Sea Cliffs began. Plumb vertical white limestone had something that no inland midge infested granite crag could offer.

Multiple trips to North Mayo in early 1973 with assorted climbers showed that the Portacloy area had rock a-plenty but that the quality of the climbing had “mental challenges” to say the least. The initial exploration involved Donal Ó Murchú and Jim Butler and at this time we found a route down to sea level close to the Pinnacle Slab that was to be our primary target after abandoning our initial plan to climb the Stacks of Broadhaven, which we had hoped to access on our air beds! On another occasion we were involved in “kid-napping” Dave Walker and Harry Connolly from the IMC hut at Glendalough. We popped in for a few minutes and asked the unsuspecting pair if they wanted to climb a new route. “Yes” was the answer, “bring your gear and sleeping bags” was our reply. En route, they were convinced we were on our way to the Peoples Crag in Kerry. A few hours later we were overlooking the Atlantic at Portacloy. Donal and I climbed “Googliox”, a 200 ft. pile of unconnected Lego blocks, while the two young’uns caused huge sulphurous rock slides to crash down to the sea some 500 ft. below. Following this traumatic experience of climbing while “Mini” sized boulders crashed past our loose route, I was spent! That evening, I refused to drive home. “We must go, it’s school tomorrow”, yelled Harry. A call home to their disbelieving parents got the reply of, “No, David, you are not in Mayo, you are in Wicklow,” came a frantic mother’s reply. A day of school missed in such a good cause just went to help build the character that produced the “Celtic Tiger”. Their other experience of abseiling from tent pegs will never be forgotten! 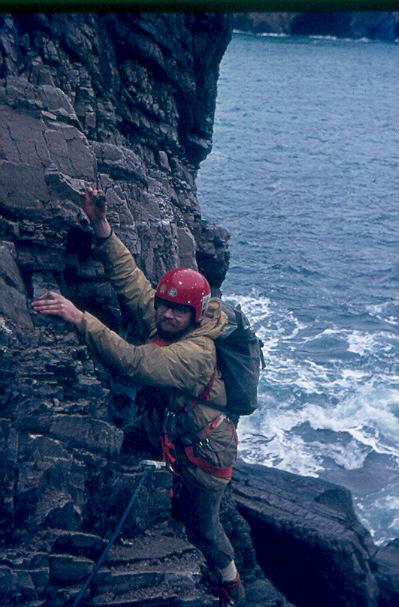 The day started early for us at noon, the weather was perfect, the sky was blue, the air and the honey coloured quartzite warm to the skin, the sea sparkling and inviting – to some.

From the tents, it was just up and over the short springy heather towards Benwee Head and the Upper Pinnacle Slab, our goal. 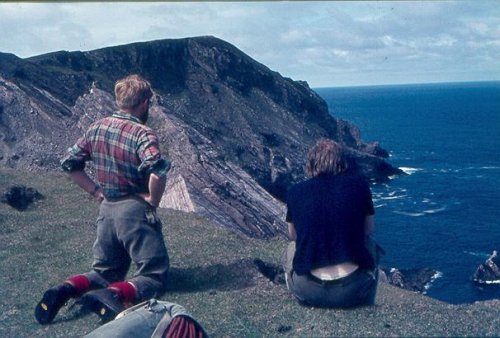 Donal and Brendan viewing the slabs

To reach the slab, the gully was descended for about 500 ft. to the start of Googliox, 180 ft., the loosest, grottiest V.Diff known to man. Donal led, I followed, it was familiar ground, we had trundled up it two years earlier. Donal set up the abseil at the top of Tír na nÓg, 150 ft. while I brought up Brendan and Cecil. 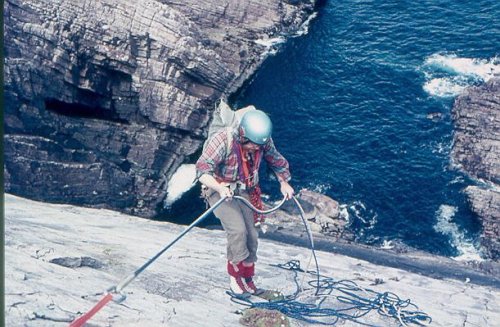 After a 100 ft. traverse back across the foot of the smooth slab towards the cave mouth, Donal prepared for his swim. Mistake Number 1, while Donal was convalescing from his ankle injury after falling off Jackie (that’s another story) the previous year, he learnt to swim; this was the key that opened the door to our epic that was about to unfold! Brendan down, cameras clicked, Donal slid gently into the dark water at the mouth of the gurgling cave, we left Cecil to his own devices. Mistake Number 2, he pulled the abseil rope down, it jammed on the only flake on the slab. Donal shivered, his skin turned Chouinard purple as we ignored him and concentrated on retrieving the rope. With a fixed line across the zawn, we sent clothes and gear. The 30 ft. Tyrolean was tensioned and we all crossed into the shade of the “Window” through the slab. By now it was 4.30 p.m. and clouding over. 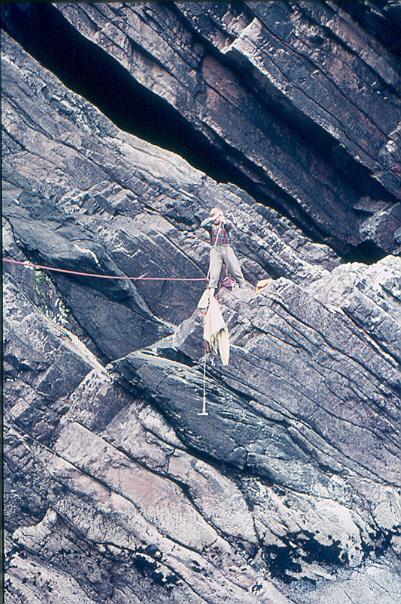 Donal hauling gear across the zawn 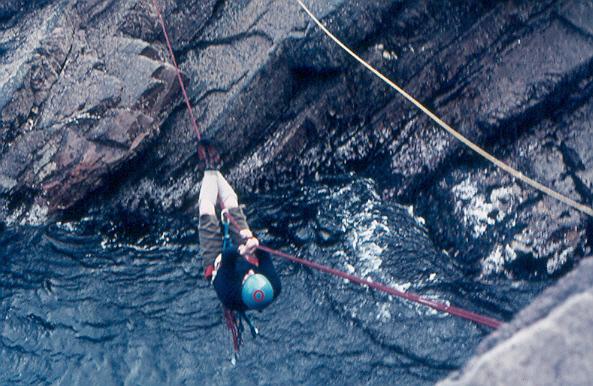 Brendan on the Tyrolean across the zawn

Out from the “Window” was steep and overhanging quartzite, beautifully cracked, looking loose but generally firm, protection was perfect I led on up to the left, 100 ft. around the corner and then the full extent of the Pinnacle Slab towered up above me, the clouds gathered, the wind increased, this was fun! The grassy ramp across the rock served as base to attack the centre of the slab. 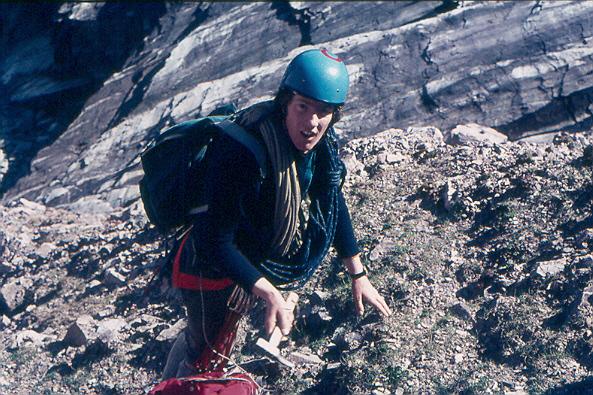 Brendan ‘digs’ for a belay

Here the rock was loose, cracks were jokes, somebody had painted fine black lines, not even the thinnest Bugaboo would fit. Eventually a peg was placed for a belay and to serve for the abseil return to the “Window”. My happy trio promptly made their way up onto the grassy ledge, the heavens opened, the slab was transformed into a sheet of water, bubbling and cascading down to the sea. The slab was so smooth, Brendan’s orange reflection could be seen on the rock! Time was ticking away fast. I tied into two 300 ft. (?) ropes and led off, the wind continued to increase with every foot of ascent. The climbing was easy, characterless, and loose and the situation obviously made it serious, no body knew where we were! Cecil shouted words of encouragement, “I’ve got the flares”, great laugh from the spectators below. I thought to myself, the range of those things won’t even reach the cliff top, nobody will see them! After 150 ft., I belayed on a loose ledge, walloped in two poor pegs. The others followed on up, more rain and wind. 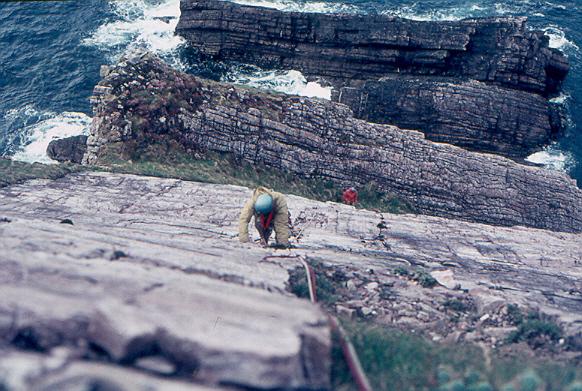 On up for about another 150 ft., passed a small pinnacle out to the left and along by a foot wide crack that split down into the very foundation of the slab, what was holding this place together? Out to my right, the weather looked grim, I walloped in one, a Cecil Chouinard angle, a star on my Climbing Diploma for using other people’s gear and I ab’d off and back to the grassy ramp. My soggy companions rapidly followed, it was now 8.30 p.m. 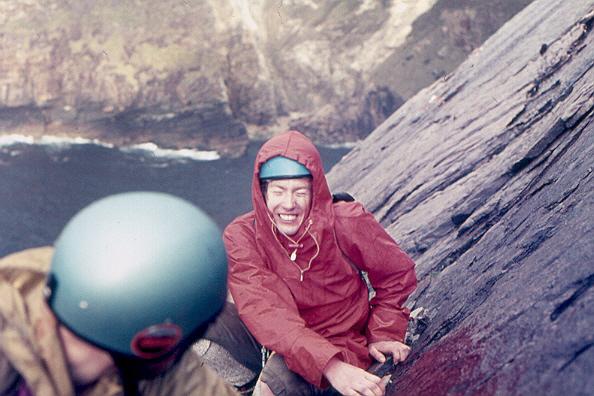 The gale has arrived

The fun was over! With one picture left in the camera, I vowed to save it for the final group picture back at the cliff top.

It was now cold and very wet. Proctor edged back down towards the “Window”, the retreat peg moved and he promptly returned! In went a long old ‘mally peg and a hammered nut, over he went, through the wind he shouted, expressing doubts about the Tyrolean. The sea was no longer inviting, it was white and fearful. Down over the lip on my abseil and safety rope, everything had to be safeguarded, the fun was over, this was different, the fast approaching gloom, a wild sea and wet slabs barred our escape. Passing the “Window”, the wind blew, the salt spray came and Brendan had to pull me back to the ledge, I had been propelled out over the sea and into space by the force of what was now a full blowing gale. The entire platform at the other end of the Tyrolean was now intermittently under water. It was hard to know which way to proceed, on across the water or back up to the grass, it was now dusk, 9.30 pm.

A quick decision was made, who made it I do not remember but I’m sure it was the right one. Donal, attached to a safety rope, clipped onto the double Tyrolean rope and kicked off – the rope was already fraying, it sagged down and the next wave grabbed him. Fighting waves and slippery rocks, he gained some height, lobbed in pegs behind a flake and waited for me. After further tensioning of the rope, now the rope was irretrievable, I crossed the heaving sea, feet in the air, sea tugging and my wind-billowed clothes, God I was weak, Donal pulled the safety rope just like an archer drawing a bow, he was at 90 degrees to the Tyrolean. As soon as I reached Donal, I set off running, up across the slab, traversing diagonally for some 100 ft., searching in the gloom for a little ledge and crack I had remembered somewhere out there. The seaweed slime now wet, the intermittent waves breaking and sending spray cascading down the slab made friction climbing in the moments before dark an interesting challenge! Communication was all but impossible, the roar of the waves and the howl and buffeting of the wind meant that rope “feel” was all we had along with knowing our companions’ climbing characteristics.

With the ledge found, pins were whacked in, the slack taken in and I awaited my first companion; it was 11 p.m. I believe it was Cecil or Brendan that came up with Donal being the last to leave the washing machine action of the gale. Each in turn started the traverse, slipped and swung across and into the boiling sea, with only “feel” to know what was happening, I hauled, they “padded” and eventually they were all at the ledge, fighting for their fraction of “horizontality”. It was interesting that belaying and knot tying in the dark is not a skill practiced by many climbers! Go practice, it could save your life!

The night was long, cold, wet for some and noisy to say the least. We sat on our minuscule ledge just above the dying power of an Atlantic force 11 gale. The efflorescence ebbed and flowed up towards us as we sang ”Ten green bottles” and repeatedly asked Brendan to remind us all why we were here! Somehow a decision was made to keep the last of the food for me, the only dry one and the “now” leader of the way out from this “infernal place”.

As night slowly crept towards dawn, I remembered the adapted words of the John Masefield poem from my prep school days:

I must down to the seas again, to the lonely sea and the sky,
And all I ask is a still day and a steady nerve to climb by,
And the boots stick and the wind’s calm and I’m not shaking,
And a grey mist on the sea’s face as a grey dawn breaking.

With the Turneresque dawn, the ropes were thrown out; they lifted skyward as if we were to perform the Indian rope trick, so much for a “still day”. The long awaited nuts and raisins were poured out towards my cupped hands and “whoosh” they were gone “down to the seas again”.

With no breakfast I’m off and soon reach the windy apex of the rock architecture and belay to our original abseil point. Soon all four of us are gathered at the top of Googliox and one by one we abseil into the scree gully that leads to the cliff top and safety.

With one picture left on the film, the final memorable photo was taken; Cecil opened his pack to reveal his camera – god, we missed those fantastic dawn shots – and … he had food with him!

I guess if we had got up the route, we would not have had a story! 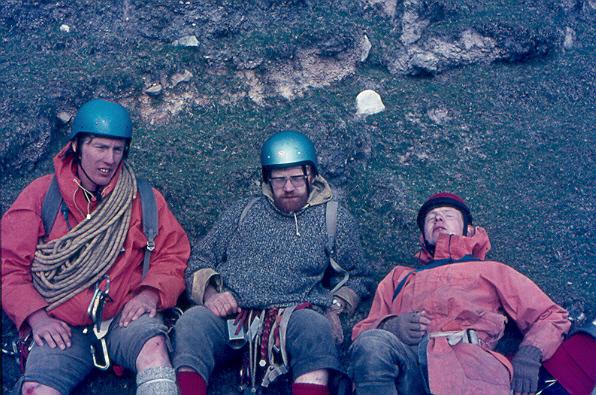 Originally penned in June 1975 but never formalised. The account was resurrected following the article “Kate Winslet washed up at Benwee Head” on the Colmcille Climbers website by Alan Tees Easter 2007, where he looked for information on “Titanic Slab”.

Link to climbs at Benwee Head