(by Elaine Mullen, from IMC Newsletter Autumn 2003)
A quick and dirty guide to the Dollies: how to get there, the via ferratas, and what to avoid.

Ian McHardy and I went to the Dolomites in northern Italy for 10 days in July. We loved it! It was our first time there, so we had only guide book pictures and friends’ descriptions to base our expectations on; they were far exceeded by the stunning scenery there.

Rather than give you a blow by blow account of what we did, here’s a short guide to the Dollies: how to get there, the via ferratas, and what to avoid.

The Dolomites lie in the Trentino-Alto-Adige region of Italy, a mixed German-Italian region just South of Austria. Before seeing the maps I had expected the Dolomites to cover one large, single area of national park, but they actually comprise many distinct and separate areas, which you would most definitely need a car and lots more than 10 days to visit. The groups to the West are the Brenta, Catinaccio, Sella, Marmolada, Pale de St. Martino and the Alpi de Siusi and Sasso Lungo, with most of the activity focused around the towns of Canezi, Corvara, Arraba and St. Martino. To the East are the Fanes, Tofano, Cristallo and Sexton groups, the latter with the famous Tre Cima Di Lavaredo towers. The main hub here is the self-styled St. Moritz of Italy – in winter at least – Cortina d’Ampezzo.

We based ourselves in the middle, mostly around Corvara, in the Sella group, but also spent some time near Passo di Falzarego, in the Fanes group.

The via ferratas (or vie ferrate, literally ‘iron ways’) are the stars of the show in the Dolomites, though there’s walking and rock climbing aplenty. Essentially, these are scrambling routes protected by a mixture of fixed cables, ladders, and even gorge-spanning bridges. Many were put up during WWI to aid movement of Alpine military units, and all are regularly checked and maintained by the Italian Alpine Club (CAI).

Routes are graded according to difficulty (technical moves) and seriousness (length, escape, accessibility, exposure), and roughly range from grade 1 (for complete novices, little climbing, short, lots of escape routes and little exposure, to grade 5 (for experienced climers/ferratists, technical climbing moves, a high level of strength and fitness required, long, dizzying exposures, few/no escape routes). We started at grade 3 and found those we did were on the exhilarating side of challenging – without the fixed protection the exhilaration would most certainly have been replaced by terror.

We used a Cicerone guide (Via Ferratas of the Italian Dolomites: Vol 1 – North, Central and East), which we borrowed from the MCI Office; a 48-page article from Adventure travel magazine (Jan / Feb 2002) that describes about 60 via ferrata routes (thanks to Tony Barry); and a short article from Trail Magazine (July 2003) with a small selection of ‘best of’ routes (thanks to Peter O’Neill).

Bear in mind that most of the guide books are written for walkers who want to go vertical so don’t be put off by scary-sounding descriptions of grade 3/4 climbs: as a climber or mountaineer you won’t have any problems. Weather troubles meant we didn’t get to do any grade 5’s but we’ll be back! And we’ve earmarked two must-do’s: the Cesare Piazzetta in the Sella group and the Tomaselli in the Fanes group.

Hire a car, hire the gear, bring comfortable boots, visit the tourist offices for maps and info, and stay in some huts.

A car is a must unless you live out of your pack, stay high and go from hut to hut. We flew cheaply into Treviso, picked up the car at the airport and flew back from Bergamo, dropping the car back there.

Gear hire is cheap and easy to do. You will need a helmet, harness, cycling gloves and a ‘ferrata kit’. The common ferrata kit comprises two specially designed karabiners attached to either end of about a metre of climbing rope, the mid point of which passes through a shock-absorbing device. This you attach to your harness with a short sling or karabiner. The ferrata kit should cost about €3.50 per day to hire, the whole lot, excluding gloves, is about €10 per day. Bring comfortable, well worn, 2/3 season boots: you will need the ankle support but not stiff soles. The ground is hard and rocky – no peat bogs here – and descents can be on steep, loose ground.

The tourist offices have a wealth of info on accommodation, huts (refugi), the vias, walking, and sell the O.S. maps. The one in Corvara even had free internet access. From there we got a list of the refugi in the area and their phone numbers, and the staff made most of our bookings. The CAI huts are much like those in the Alps – basic but adequate – but also serve lunches and beers. The privately-run huts on the other hand are a bit more expensive (still less than Swiss huts!) but far more luxurious. You get clean sheets, duvets and food served at your own table in the restaurant! (Don’t laugh! This is pure decadence after hutting and camping!!). We stayed at one such hut (Lagazuoi, Passo di Falzarego) for two nights because we liked it so much. It had a huge decked area outside with tables and chairs and a 360° view of some of the most spectacular mountain scenery you’re ever likely to see.

Thunderstorms, crowds and the lack of ATM’s.

Don’t climb the vias in a thunder storm or you may well find yourself clipped onto one long lightning conductor. Our arrival in the Dolomites was heralded by the mother-of-all thunder and lightning storms, the likes of which hadn’t been seen in years we heard. It gave us a healthy respect for bubbling cumulus clouds.

The vias are not a well kept secret! They can get very busy, especially in August and at weekends at the end of July. Those that are a short walk from the car parks and at grade 3/4 can get quite congested with excruciatingly slow-moving guided parties. You can boost your ego (and shorten your life span) by unclipping from the cables and ‘free-scrambling’ around them. 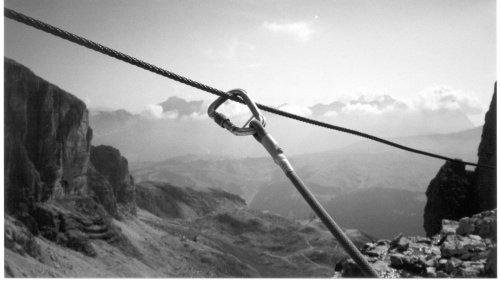 A quick note on ferrata etiquette and using your ferrata kit is useful here. First, the cables are there as protection; you shouldn’t haul yourself up on them (though you’ll need the occasional heave), but many of the aforementioned slow movers will be hauling. Second, your standard ferrata kit has two karabiners, only one of which should be attached to the cable at any given time, except when you come to the big bolt that fixes the cable to the rock. Here, strictly speaking, you should clip karabiner no. 2 on to the cable beyond the bolt, then remove karabiner no. 1 from behind the bolt and clip it on to your harness. In practice, we found this to be hugely tedious, fiddly, and unnecessarily slow. We just used the one karabiner most of the time and felt quite safe.

Finally, money. The CAI huts do not accept credit cards. So if you plan on being up high for a few days bring loads of cash and make sure your car trip there takes you through one of the bigger towns. We didn’t go hungry, but had to make a wild dash down the mountain into the nearest town at one stage to avoid two weeks worth of slave labour doing the dishes. And, as sod’s law would have it, missed the last cable car back up again. The walk did us good (not!).