(by Joss Lynam, from IMC Newsletter Autumn 2004)
An obituary of the founder of the IMC. 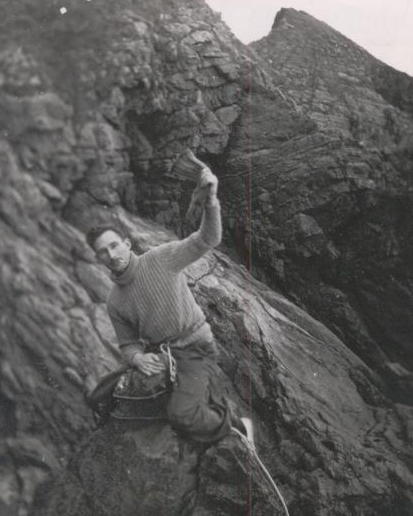 Bill Perrott died recently at the age of 78. His name may be unfamiliar to many IMC members since he emigrated to Canada in 1957, but we all have to be grateful to him for his work in the years before he emigrated. He was a leading member of a small group of friends in their late teens and early twenties who in 1942 formed themselves into the Irish Mountaineering Club. They climbed in Dalkey Quarry, at Bray Head and on Ireland’s Eye, but the Club died in 1943 as the members left Dublin. Bill, with J R Greening produced a short guide to their routes – hand-written with carbon copies! I have the IMC membership card that he gave me when we first met in the Indian Army in 1946. In 1948, when I came to TCD, I helped him re-found the Irish Mountaineering Club, as the first mountaineering club in Ireland with open membership. From a letter to the papers and a meeting of some sixty enthusiasts in the Central Hotel in December 1948 grew climbing and hill-walking as the vibrant and popular sport we know now. Until I emigrated in late 1951, I worked very closely with him (I was Secretary after him, and unlike him, had Alpine experience), but it was Bill who had the dream of an Irish Mountaineering Club.

Bill was Secretary of the IMC for the first year, which included hill-walking and rock-climbing Meets, an Alpine Meet and a big increase in membership. He continued to be an active member of the Committee for some years thereafter. Most of the members had little experience of hill-walking, let alone rock-climbing so organising Meets led by the few experienced members was very important. His wife Stella was also a climber and walker (she was on the first ascent of South East Ridge on Ireland’s Eye) and did not grudge the time he spent on Club affairs, though after the birth of their second child in 1951, family affairs took up more of his time.

He was one of the few members who had any experience in rock-climbing, though he did not claim to be a tiger. Before 1942 he had lived for some time in the English Lake District and climbed in that Mecca of rock-climbing (this is why many of the 1942 climbs in Dalkey are named after Lake District routes). It is proof of his use of this experience that within a couple of years the Club had a group of new climbers (Frank Winder and Peter Kenny to name only the most notable) making new routes of high standard and quality. He edited three rock-climbing guides, Dalkey Quarry with the writer in 1949 and two more on his own, Ireland’s Eye and Luggala in 1950. His name can be found on the First Ascent list of all these crags, and also on Bray Head. Fifth Avenue and Paradise Lost are amongst those that will always remain classics. He was always searching for new cliffs, and I vividly remember him stopping his rather battered old car on the road at the gate to Luggala Lodge, and pointing out the then untouched crag above Lough Tay. I got the message.

In 1957 he was forced, like so many others, to emigrate because of lack of job opportunities. With his family he settled in Calgary in Canada and remained there until his death. He was active in the Canadian Rockies during most of his time in Calgary and introduced his three children to mountaineering and camping. His son Ray writes that Bill disliked the loose sedimentary rocks of the Rockies and yearned for Wicklow granite. He was always interested in the activities of the IMC and read the Journal and Newsletter avidly. In the nineties his health deteriorated and he was frequently hospitalised with stomach problems. His last visit to Ireland was for the IMC Golden Jubilee (1998). Even then, though he concealed it well, he was often in pain, and this got worse over the next few years culminating in some months of misery before he died.

Anyone who knew him then will remember not just his climbing and the founding of the IMC, but his enthusiasm, good nature and wonderful smile.

Note: Barry O’Flynn has made reprints of the four guidebooks Bill edited and these are available in the Club Library