(by Dave Craig, September 2008)
A weekend at Ailladie, climbing when dry enough, surfing when not.

A summer Noah could have been proud of, has left little options for climbers at home. Quick-drying crags around the country all seem to have one thing in common, there are not many routes on them. That is of course excepting Ailladie, which has a huge number of routes on some of the best rock in the country. Routes that start to dry as soon as it stops raining, routes that are dry when it stops raining and routes you can climb in the rain!! So with this in mind and a vague promise from the weatherman that it might stop raining briefly over the weekend, we headed off.

The wet weather also means you seem to lose touch with other climbers. So when driving through Fanore, we spotted a few, it seemed only neighbourly to go say hello. Alas! I am sorry to say climbing seemed to be the last thing on their minds. 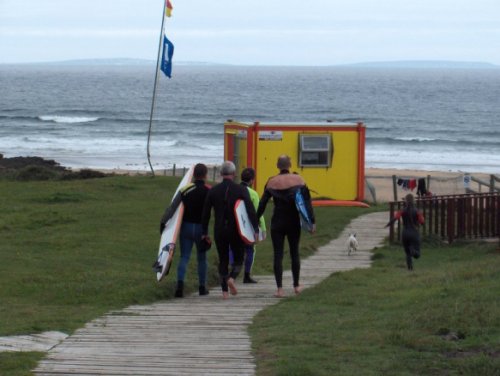 However I was soon to learn that there might be some sense to this madness, waves like mountains are there to be climbed, and just like in the mountains this lot seemed to spend more time underneath them getting wet than up on top.

Some managed better than others it has to be said, 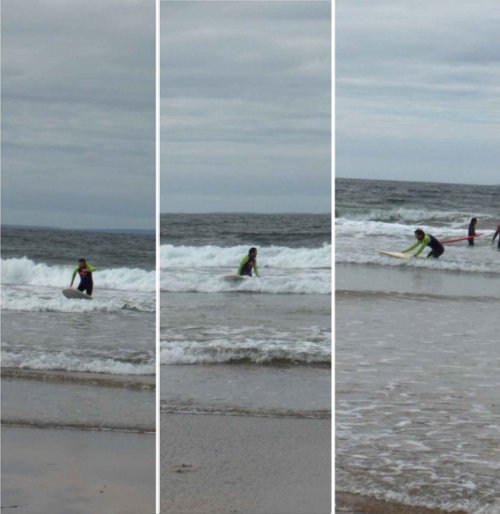 with the best of course rising to the top, 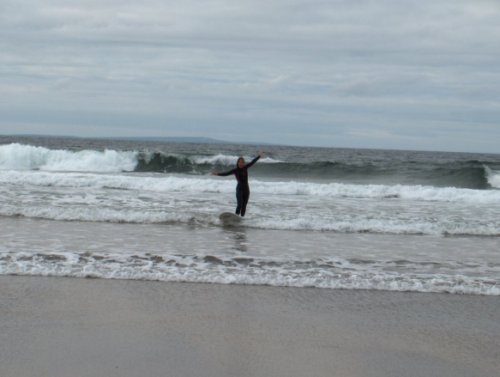 It wasn’t all fun and games though as Conor and Nicky had to apply some TLC to Terry O’Connor after a weaver fish stung him.

Eventually though the rain had held off long enough to warrant at least looking at the crag. Myself and Síle abbed into Stone Wall and climbed Western Pride, E1 5b. This end of the crag seems to dry a bit quicker than the other and is a good option for such days. Before we could get a second route the rain returned, so we bailed out.

The next day was better weather-wise, with the gaps between the showers being slightly longer. We returned to Stone Wall where Síle did a fine lead on Garbh, E2 5c, to start us off. Terry wanted his own go on Western Pride and I had a crack at Kleptomaniac, E3 6a, down at Aran Wall, but ran out of steam just above the crux; there’s never a shower when you need a good excuse. 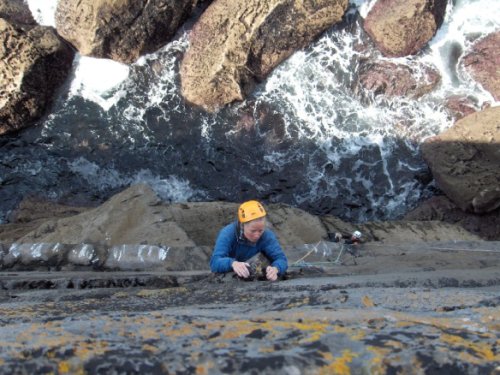 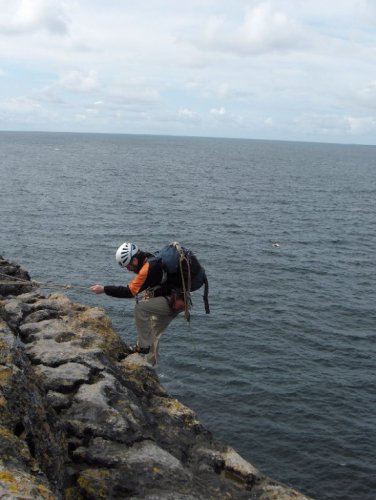 Anyone who hasn’t climbed on sea cliffs might want to note the bag with the ropes paid into it ready to go, used to stop waves washing the ropes out to sea. The best approach to abbing in to spots like this is well described in the new Burren guide (and the old one), although it is probably still best to talk to someone who has done it, before going down yourself.

Terry O’Connor’s stung foot must have been contagious as the three lads never showed on the Sunday, the hot humid atmosphere in McGann’s is ripe for the spread of such things.

Myself and Síle stayed on for the Monday, watching showers pass over all morning. Then a slight improvement in the afternoon tempted us into Murroughkilly, where we climbed Bronco, VS 4c. Not unexpectedly, the weather changed giving a fitting end to this summer, which saw me sliding down the descent ramp on my rear with hailstones bouncing off my head and completely soaked to the skin. I can only conclude: WEST IS BEST ME ARSE; next time I’m off some place sunny!