(by Chris Clarke, from IMC Newsletter Spring 2004)
A winter camp in the Mournes.

There were 3 main elements to the camp: climbing on the Bearnagh Slabs, night navigation, and a 6-hour walk on Sunday to cap it off; if this meet was a sandwich you could not get much more into it.

The weather forecast for the weekend was dry with northeasterly winds; temperatures “BLUDDY FREEZING”.

Having reached the campsite, which was the col between Slieve Meelmore and Slieve Bearnagh, we crossed over the Mourne Wall to take advantage of the shelter from the wind. Rather than pitching the tents we went climbing as time was moving on. Chris and Allister decided on Grand Central, (Grade VD 70m); Stephen and Kieran went for Directissima (Grade Severe 80m). The rock surface was very cold to the touch so gloves were kept at the ready when there was a rest or belay break. The friction on the Bearnagh slab is excellent but not as good as in the hot weather when the shoe rubber is softer; nevertheless we ascended the routes in good style and in good time.

After returning from the crag the tents were erected; three one-man tents and a bivy bag would shelter us from the elements. Dinner was next on the agenda; after that was downed we headed into the darkness to do night navigation. It was a clear night; for the stargazers it was perfect.

On Sunday morning there was frost on the tents and for a brief minute or two we had a shower of light hailstones and the cold northerly wind persisted.

All of the gear was packed away into one tent for shelter and security. The plan today was a walk. From the campsite we headed up to Slieve Bearnagh; from there we dropped down to Hare’s Gap where we crossed paths with other walkers who had come up the Trassey track.

From Hare’s Gap we headed for Slievenaglogh then on to Slieve Corragh, and finally the gigantic granite pinnacles on Slieve Commedagh; the date on the pinnacle 1913. The sign notifies that trespassers will be prosecuted. From there we dropped down to the col between Slieve Commedagh and Slieve Donard. The walk back along the Brandy Pad was very pleasant; the weather was good as it had been for the entire weekend. Before long we were back at the campsite and an hour or so later we were at the car park. 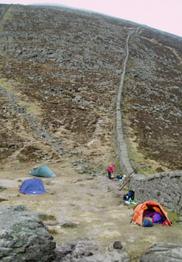 We finished off the weekend in the coffee shop beside the car park. The fruit scones, homemade, were scrumptious. The final act was a photo shoot with the kind assistance of the shop assistant. 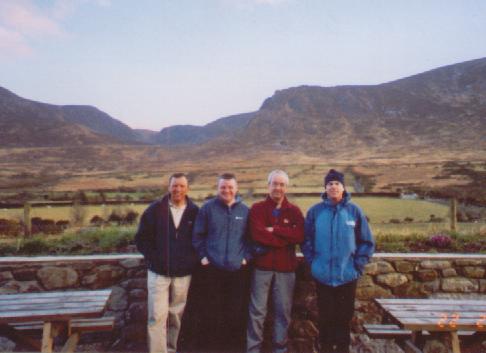 The History of the Mourne Wall

The building of the Mourne Wall around the Mourne Catchment provided seasonal but very welcome local employment between the years 1904 and 1922. The wall stands up to 8 feet high and on average it is 3 feet wide. Twenty-two miles in length it connects the summits of no less than 15 mountains, and is a monument to the skill of the men who built it.

In 1933 the successful damming of the Kilkeel River valley was the culmination of 30 years work initiated by Belfast City and District Water Commissioners (responsible by an Act of Parliament to supply water to the city of Belfast) This set in place first the Mourne Wall and then the immense reservoir in a renamed "silent valley". Built to gather waters from a mountain catchment extending over most of the High Mournes, the Silent Valley and Ben Crom reservoirs supply most of Co. Down and a large part of Belfast for domestic and industrial use.